I read on YIMBY that some people who live or work in the Jerome Avenue corridor in the Bronx are concerned that rezoning the area to allow residential development could price out many of the auto body shops and other car-related businesses that operate in the area. I sympathize with the concerns, but I think things have to change. And the more I think about it, the more important it seems to me. 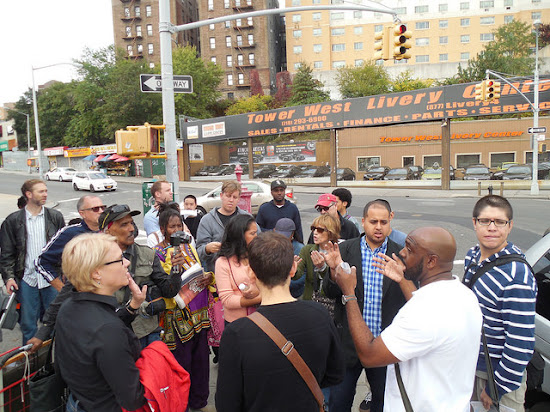 A walkthrough of the Jerome Avenue area conducted by the Department of City Planning, January 2013. Photo: Gerard Flynn.
It seems pretty clear that allowing residential uses will price out auto-related businesses. There is a tremendous demand for housing, and housing is displacing auto services wherever they are allowed to compete, from the gas stations of the East Village to the garages of the Upper West Side to the used car lots of Woodside. I am not including Willets Point in this: there is no competition there, only government fiat.

As a business owner, I am not exactly happy about small businesses being unable to survive. My brother-in-law is an auto body mechanic, so I also appreciate the value of good technical jobs that do not require a college degree. And yet, there is such a thing as a job that costs too much. I have argued that the costs of each Tappan Zee Bridge construction job, in terms of sprawl, pollution and yes, death and destruction, are too high. I would say the same thing is true for auto related jobs along Jerome Avenue, and elsewhere in the city.

We have driven away many of the port jobs and the manufacturing jobs, and auto related jobs are a good chunk of what is left. As my friend Stephen Smith, who used to write for YIMBY, has observed on Twitter, the vast majority of businesses in M zones around the city are not involved in manufacturing anything.

Every time I have heard about a gas station closing or a parking garage converted to apartments, I have smiled inside. I smiled because I remembered the difficulty of crossing in front of these gas stations and garages. "Difficulty" is too nice a word: I remembered the dread I felt trying to walk in front of the gas stations as drivers cruised in and out across the sidewalk at high speeds. I remembered the humiliation I felt when garage customers parked across the sidewalk, forcing me out into traffic. I smiled at the thought that nobody else would feel that dread and humiliation again.

I and many other pedestrians have been similarly threatened and humiliated in front of car dealerships and repair shops in "industrial zones" across the city. Some have been killed. You will forgive me if I am not horrified at the prospect of losing an industry with such little regard for safety.

But we still have millions of cars stored in our city, and millions more that come in for the day. Where will their owners buy and sell them, and bring them to be serviced, if not on Jerome Avenue, Northern Boulevard, Jamaica Avenue or Atlantic Avenue?

Well, if they had to they would go to Hempstead Turnpike, or Kennedy Boulevard, or Boston Post Road. But that makes me think: if these businesses can't survive on Jerome Avenue or 21st Street without being protected from competition from housing, that means that we are essentially subsidizing the cheap rent, and thus the cheap repair jobs, with our expensive apartments. My mom is paying more every month so that the guy who cuts her off in the crosswalk can pay less to have his oil changed.

Please, let's find some jobs for these people so that we can shut down the M zones.
Posted by Cap'n Transit at 12:38 AM

The reason behind manufacturing zones is not to keep the rent down for industries that can't otherwise compete, but that if residential use is allowed, the residents start complaining about all the noise, pollution, and disruption these businesses cause. I have no problem with letting people live in these areas given an understanding that the businesses were there first and the newcomers are not entitled to complain about what has been going on for years before they ever arrived.

I wish they'd bring the port industry back.

Brooklyn has one of the best deepwater ports on the East Coast, but all the traffic has shifted to New Jersey because it's impossible to transload to rail in Brooklyn. The Port Authority was suppoed to build a freight rail tunnel something like *100 years ago* but still hasn't...