No, e-carpooling will not replace fixed-route buses

A lot of people have been talking about "microtransit" lately - sometimes meaning shared e-hailing services like Uberpool and Lyftline, but also some larger services like Bridj, Via and Leap, and even dollar vans. I've read some wise things, and other things that are ...less wise. I think this is going to be a few posts, and I'm going to start with the question of whether electronic taxi-sharing services like Uberpool and Lyftline will, or even can, drive public buses out of business, and the role of pricing. 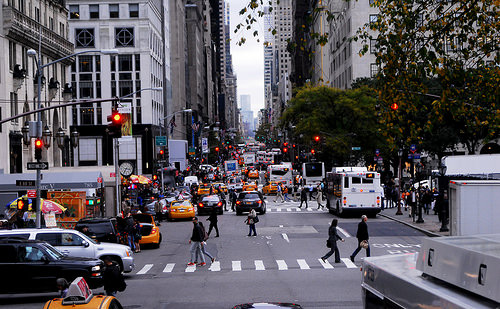 In the short run, these services will be a way for yuppies to pay a little less for their taxi rides. But they're also starting to blur of the line between taxis and buses. In the long run, that line is likely to disappear altogether, as all conventional buses are replaced by smaller and nimbler just-in-time transportation options.

No, "flexible" transportation services are not going to replace buses, ever, as long as they're competing on a level playing field. Jarrett Walker had the ultimate takedown years ago, and then reprised it again and again when people kept repeating the same nonsense:

You can spare yourself a lot of confusion about flexible service by keeping in mind the physical facts of the matter: Driving a special routing to respond to a customer request takes more of a driver's time than picking up a customer along a fixed route. Since we pay for service mostly in hours of labor, we have to care about how many passengers we'll serve with each labor hour, so flexible service is intrinsically limited on that important score. That's why when flexible routes near their (very low) capacity limits, we usually try to turn them back into fixed routes.

In February, Uber analyzed its data from Los Angeles and concluded that many people were using it as feeder service to get to the Metro, leading Chris Plano to reiterate Timothy Lee's speculation in March:

On the other hand, ride-hailing could actually be stealing riders from transit. If the same trip can be completed in less time with an Uber or Lyft than using the Metro, some riders will choose the speedier option. However, at the moment, it is unlikely that hordes of people will abandon transit for ride-hailing simply because transit is still less expensive.

Jarrett himself, in a comment on Plano's post, mentions that Uber and Lyft executives "are often quite explicit about wanting to draw people away from public transit," and seems to believe that because the e-hailing services are less regulated than the public transit agencies, they might actually succeed.

I'm not convinced at all. I'm guessing that these are actually people who might have driven to the Metro station, but even if they switched from riding feeder buses, Plano is dancing around an important point: these are people who are willing to pay a premium price for a faster trip. Let's say they're spending five dollars for an Uberpool to the train station. They would probably be happy to pay four dollars to ride a public bus, and for four dollars a pop (no free transfer), LACMTA would probably be able to run the buses frequently enough to satisfy them. But because LACMTA charges a consistent $1.75, and would probably be bitterly attacked if they tried to charge more in some neighborhoods, this leaves an opening for Uber. I really doubt that Uber could make that work, even with driverless cars, for less than a bus fare.

"Driving a special routing to respond to a customer request takes more of a driver's time than picking up a customer along a fixed route. Since we pay for service mostly in hours of labor, we have to care about how many passengers we'll serve with each labor hour, so flexible service is intrinsically limited on that important score. "

That's a really bad argument when talking about anything beyond 10 years from now. Uber and Lyft have the VC backing and valuations because self driving cars are going to happen.

In college I was an engineer working on a team to build a self driving car. That was about 7 years ago. We actually won a couple inter-colligate competitions because our robot worked fairly well. At the time if you asked me how long until true self driving cars, I would have said 2035 or 2050. It just seems so far away given how difficult it was for us.

Based on everything that has happened in the 7 years since, I was completely wrong. Some great engineers are attacking the problem from multiple directions. The progress is astounding. Even more impressive is the amount of capital flowing into the space. There is a full on race to get this working with billions of dollars on the line. It will be working better than most cab drivers in less than 5 years, the only question then will be regulatory approval.

Given that, it becomes a question of economics. Do we think a self driving car will be significantly cheaper than a regular car + the cost of labor for cab drivers? I bet it will be after not to long. Especially if you think that Uber will be buying the cars and running them for more hours in a day than a cab driver would be able to stay alert and on the job.

So then the question becomes how to work that into our transit system. Clearly even with self driving cars we will still have the situation where you can put 50+ people on a bus but only a handful in a car. The physics of space matter a lot more than the economics of paying a driver.

I personally am hoping to see a much improved feeder network of self driving cars that connect to high capacity trunks of public transportation. Why live within walking distance of the train if you can get picked up & dropped off at the train by an autonomous car? Why have parking lots at the train station when no one needs to park anymore?

It's a different problem entirely, and city/transit planning 10+ years out that doesn't account for the fact that autonomous cars are about to happen is missing the boat.

What I have not seen in all of the discussion of self-driving cars:

2. Where will these autos park when not in use, whether at midday or midnight?

3. How will maintenance be handled?

4. If these cars increase total vehicular miles (that is, instead of single owner autos being parked when not in use, these cars will have a lot of deadhead miles traveling from client to client), what will be the impact on air quality.