I remember when Joe Biden remarked that LaGuardia Airport felt like the Third World to him. I remember thinking, "What the fuck is this guy talking about?" I thought about writing something, but my thoughts were kind of messy and it felt kind of hopeless, so I moved on to something else. Now I'm kicking myself. 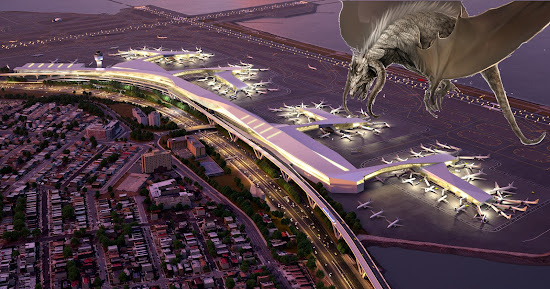 I generally like Biden. He has a long record of not only supporting Amtrak but riding it himself, although with all his support it seems bizarre that the company would only have one line going through his state, with two stops. And I like how he seems to genuinely speak his mind.

But I've been to the Third World. Dominicans may not like me calling their country third world, but their airport is a bit lacking in the air conditioning department. I think we can all agree that Abidjan is third world, and when I was there they didn't have jet bridges. You get off the plane, go down the stairs and walk across the tarmac to the gate. Not a bad airport, all in all, but not in the same league as any airport I've been to in the United States. LaGuardia has good air conditioning, and it has fully functioning jet bridges.

I've also flown into a lot of airports with good reputations: Heathrow, Charles de Gaulle, Keflavík, JFK's Terminal 5. I honestly don't see what the big deal is. I like Terminal 5 because they have Cibo. If I could get some fresh vegetables with dip, and a decent ice coffee, to take on the plane at LaGuardia I would be happy.

If I've ever had a problem flying into or out of LaGuardia it's been the crappy bus connections. I hate waiting a long time for a bus to come, and then when it does it's packed with people who got on at the other terminal. I hate how the buses have to fight with all the cars and taxis to get to the curb. I hate how in the winter the curb is blocked by taxis. The Q70 is a big improvement, but there's still a long way to go.

Somehow, whenever people talk about how awful LaGuardia is, they never mention how the buses are blocked by taxis. It's always the low ceilings, and maybe somebody once saw a rat. I've never seen a rat there. I've never noticed the low ceilings, in fact some of them are pretty high. I kind of like the architecture. When I was a kid the Central Terminal would occasionally pop up in my dreams. The new terminals aren't bad for what they are. The Marine Air Terminal is a fucking Art Deco monument.

What would make the biggest difference to me would be a direct train there from Woodside, or even from Astoria (and no, just because it was politically unfeasible in 1995 doesn't mean it's politically unfeasible twenty years later). Andrew Cuomo likes to style himself as the Bold Leader who Gets Things Done. If he really were, he would extend the goddamn N train and tell Gianaris to grow a spine and get on board. But instead we get a proposal for a shitty AirTrain that would dump all the LaGuardia passengers at Willets Point, twenty minutes further out in Queens. That's not boldness, that's cowardice. That's Cuomo running away from a challenge.

What would really make a difference to me would be if we took that four or ten or twenty billion dollars and used it to build a new train along 21st Street and Astoria Boulevard, or the Tribororx, or a Queens Super-Express, or the Subway to Secaucus, or basically any transit improvement that would be used on a daily basis by people who don't work at the airport.

I'll tell you what it is that makes LaGuardia a Third World airport. It's the authoritarian, top-down approach taken by our Governor, and yes our Vice President, who have never come through here or sent staff members to ask what we might want or need. It's the plutocratic approach that puts the optics of the business traveler ahead of the convenience of families going to visit relatives. It's the cowardice of building a flashy AirTrain to nowhere instead of taking on the entrenched elites who want to block a really useful train. It makes me feel like I live in a goddamn banana republic.

(Dragon appears courtesy of the Durian-Project of the Blender Foundation.)
Posted by Cap'n Transit at 1:37 AM

I think even the business people might prefer better public transit to a flashier terminal. It's pretty telling that in places with good direct airport-downtown connections you see a decent number of business people riding transit to/from the airport (and not just Heathrow Express).

Since there are few people connecting domestically at La Guardia, other than on Delta, the need for an integrated terminal is minimal. See this blog on why the integrated terminal is likely to be a poor experience for everyone: http://viewfromthewing.boardingarea.com/2015/07/28/with-laguardia-getting-a-makeover-these-are-the-5-other-worst-airports-in-america/

I prefer the idea put forth by George Haikalis in the Times, shut down Laguardia, and build a high density middle class neighborhood in its place. Use the $4 Billion to upgrade connections to existing airports (Airtrain into Grand Central, for example?). A new neighborhood on the Flushing and Bowery Bays would spur transit expansion, provide jobs and housing, and even perhaps a new park for the borough that so needs them.

El Salvador's airport is much nicer than LaGuardia, in my experience. I usually fly out of Terminal B Concourse B, and if there's any delay, the terminal is in crush-load mode, with no food services or room for chairs or desk, so people are just piled up around the floors.

this is excellent. Biden takes one trip into la Guardia, he gets a $ 5 billion new terminal from Cuomo . 5 million people take the subway, we get squat from Cuomo.. Goes to prove that powers rots everyone.