The best bang for the subsidy buck

In a recent post, I wrote that we would expect transit patronage to expand if:

Here's an example from another domain. The Wii, with its rotation-sensing technology, is more efficient at providing entertainment than the XBox 360 (and the Sony Playstations 2 and 3). People buy game consoles based on the entertainment they provide. (c) is not necessary because we're talking about the private sector. The result is an increase in the market share of the Wii at the expense of the other consoles (NPD data adapted from the Video Game Sales Wiki): 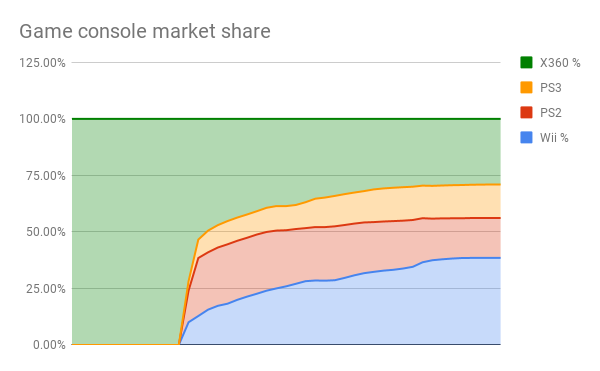 In transportation, with regard to (a), there are a number of factors. In a spread-out rural area with 90% car ownership, a million dollars spent on a new road might well get more people to work/shopping/soccer practice/school than spending that same million on buses and people to run them. But I think in New York City, a dense city where drivers are in the minority, a million dollars spent on transit will go a lot further than a million spent on roads.

So I think assumption (a) is sound. Do people patronize transportation systems based solely on access? Are subsidies based solely on patronage ... of transit systems?
Posted by Cap'n Transit at 12:04 AM

Email ThisBlogThis!Share to TwitterShare to FacebookShare to Pinterest
Labels: cycle, sustainability, transit for all

One of the more common threshold effects are viability thresholds. If a certain amount of spending is needed to permit viability, and subsidies were to be entirely distributed based on usage ...

... then there is a zone where on average a system ought to be above the viability threshold, but with natural volatility in ridership, it can also expect that there will be years in which its subsidy does not bring it over viability.

If sooner or later there is a failure to fix the funding "crisis", or if a debt-based fix is adopted that raises the long term viability threshold and so makes crises more frequent ... then the system that ought to be available based on the average patronage must be cut back.