The mechanics of mode shift

I've discussed how transit use can be a feedback loop. Like any product, if people use it and like it they'll buy more, and tell their friends. This drives up demand, which can allow the provider to raise fares and finance expansion. Public transit operators, with their social missions, often have difficulty raising fares, but high demand can provide political support for more subsidies, allowing expansion of the system.

The feedback loop can also operate to the detriment of transit. If people use and like the highways, they'll support highway subsidies instead of transit subsidies, and it's the highway system that will expand.

This has the potential to work in transit's favor, since it's more efficient at providing access to what people need, even though the cost of labor in driving is borne by the traveler. If we assume that the subsidy dollars are divided up in proportion to population, this actually benefits transit users because they get more bang for the buck.

Let's say that in the year 2000 there are 99 drivers and 1 transit user (the famous "bus with just one rider"). They each pay $10 in taxes, of which $990 is spent on roads and $10 on transit. But if each transit dollar is twice as efficient as a road dollar, that's like spending $980 on roads and $20 on transit. That means that transit improves, and let's say that in 2001 one of the 99 drivers decides to switch to transit. So the next year there will be $980 for roads and $20 for transit. But that $20 is worth $40, which attracts another two former drivers. 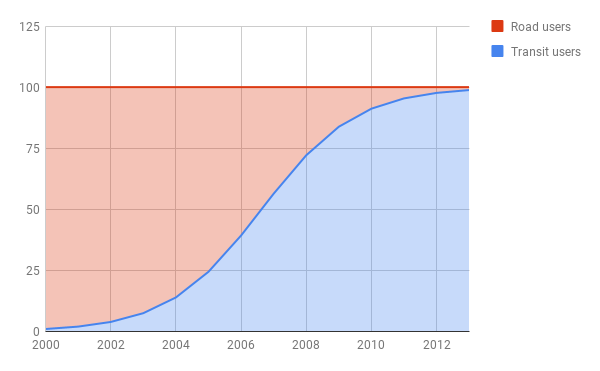 Now, obviously we haven't seen these kind of numbers. That means that either the shift is starting very slowly, or one of the three assumptions is inaccurate.
Posted by Cap'n Transit at 11:23 PM

Email ThisBlogThis!Share to TwitterShare to FacebookShare to Pinterest
Labels: cycle

All three assumptions are incorrect. but most of the theory you explain is sound.

The biggest and most important false assumption is that transit is more efficient. That assumption is only true if the ridership supports it. Like it or not, a bus with one rider is at least 4-5 times less efficient when you just take into account fuel efficiency, let alone capital costs and labor costs. It is typically only when you get to the levels of 50-60% load factors that transit becomes more efficient on a total cost basis (but even those numbers can vary greatly due to wildly varying capital costs). Once you reach the efficiency break even, the efficiency advantage rises slowly...and the slower the advantage, the slower the rise in transit utilization. If you are only 1% more efficient, the feedback loop happens much slower than if you were twice as efficient.

This one is relatively minor but subsidies are not distributed based on usage, at least not in a democratic society. The mode favored by the majority of voters is the mode that will receive disproportionate funding. This complicates things a little with a political party system and nonmandatory voting, where politicians will only work to please those that are motivated to vote for him/her...but unless you elect someone from a political faction or party where the majority of voters are predominately users of one mode, disproportionate funding is likely to go to the most used mode. This is the reason why even Democrats, which are more likely to support transit, still send disproportionate amounts of money to roads.

Sao Sebastiao, I think you're not reading "efficient" the way I intended it. I'm not talking about fuel efficiency or energy efficiency or anything like that. I'm simply saying: how much access does this provide, to how many people, for each government dollar spent? I'm not sure it's been studied, but I think you'd find that transit subsidies are more efficient at giving people access.

Subsidies are definitely not distributed based on usage, but the funding doesn't always go to the mode favored by the majority. Look at the congestion pricing debate if you don't believe me.

Cap'n, I'm not sure that the CP debate is much of a data point. I'm willing to believe that the majority of New York City voters own cars, and even drive them to work. The city has a car-free majority, but I'd venture a guess that this majority is disproportionately immigrant and poor, and hence not likely to vote.

Subsidies in the US are not based on usage. That is why so many transit agencies in the US are in trouble. Ridership is up, but the total amount of subsidies have remained unchanged or have gone down.

Transit usage rose in response to high gas prices. It continued to rise, despite falling gas prices, due to rising unemployment, as people substitute a dollar cost for a time cost. However, for most transit agencies, the percent of their revenue derived from the farebox is pretty low. The largest part of transit agency funding comes through taxes, either directly (as here in SLC) or indirectly, through city or state appropriations. As tax revenues fall as a result of the recession, the share of funding transit agencies receive falls in turn.

Arguing for the 'efficiency' of transit seems (to me) a losing strategy. Being able to demonstrate tangible benefits seems a vastly superior way to go about it. The political capital to build highways does not result from 'aggregate regional transportation efficiency', but very much to do with expectation of local officials that road funding will mitigate local congestion.

Transit competes with highways. Reliable transit needs dedicated right of way. Why not kill two birds with one stone, and using dedicated bus corridors to prize right of way away from automobiles,such as the 34th street bus corridor is doing?

The automobile didn't suddenly replace every other mode--it was decades of nickel-and-dime cuts in subsidy, service, and right of way. Frankly, I am inclined to believe that cyclists have been much more effective in their efforts than transit.