What you can do instead

Recently I've seen a number of blogs and emails addressed to transit advocates, urging us to attend the hearings that the MTA will be holding on the proposed service cuts, layoffs and elimination of student metrocards. In case you are tempted to follow the advice of these leaders, let me quote a leader from long, long ago: 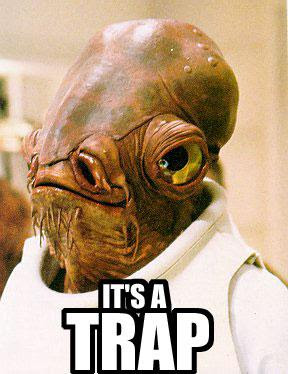 What could possibly be gained from going? If these cuts are due to corruption and mismanagement by the MTA, how will showing up at a meeting change that? The MTA board is appointed by the mayor and the governor, and the board members' main goals are to please the person who appointed them so that they continue to get favors in the future. They know you're not going to complain to the Mayor or the Governor about their actions. If you were, you'd be doing it instead of wasting your time at that meeting. So your ranting about wastefraudandabuse is going to be completely ignored.

With the current executives, pleasing them includes actually running the agency well and passing a balanced budget. That means that they're not going to increase overall spending without a way to increase revenue. If increasing spending is off the table, then all the MTA Board can do is decide to cut the Y88 bus instead of the Z35. Or to cut bus service instead of station agents. Or raise fares instead of cutting services. If you've got a strong argument on one of these issues, then by all means go, and they'll probably listen to you because it's something that they actually have control over.

If, on the other hand, you want to see overall MTA spending increase, then the last people you want to be telling are the MTA board members. They have no control over it! It's the city, the state and the federal government. Why not take the time to sit down and write a nice letter to your State Senator about why they should support bridge tolls? If you were planning on going with a group, just throw a letter-writing party at your local cafe!

Maybe you think writing a nice letter is too lame for this kind of crisis. You're mad as hell! Well, why not go pay your Assemblymember a visit and tell them how you feel about the Assembly failing to pass congestion pricing in 2008? If you're really hankering for confrontation, you can show up to one of their "Save the T22" rallies with signs saying "Save the T22 ... with congestion pricing!"

I got an email today from an advocacy organization encouraging me to show up because the press is there, and elected officials often use these hearings for grandstanding. "This is a chance to call them out, and hold them accountable," says the email. Yeah, you could do that, and it's probably the best thing you could do at one of these hearings. But you know what these things are like? You'll be sitting in a stuffy room for hours listening to misinformed community board members and lying elected officials spouting nonsense. Eventually your turn will come, and maybe a few people will listen to you, but most of the elected officials and reporters will have gone home. If you do get interviewed, the next day you'll find the video online and your twenty seconds will be totally overshadowed by six morons.

If you want to call your elected officials out, then pay them a visit or write them a letter. If you want to hold them accountable before the press, then just keep your eye out for the next rally and show up wearing something that really makes them look foolish. You'll get lots of press!

In general I think the calm, conciliatory approach works most of the time, but at some point legislators need to know that if they stiff transit enough times, transit advocates will make them look really bad. If transit advocates are incapable of doing that, well then we've already lost, haven't we?
Posted by Cap'n Transit at 12:23 AM

Seems to me what you need here is a bit of theater. Of your own making.

But name names carefully. It's power, but people you have pissed off rarely do what you want. You gotta figure out your angle, your strategy. And who exactly you want to shift.

Christopher, many of the State Legislators have made such forceful arguments against tolls that they would find it very hard to vote for them. I don't think we have any choice but to get these people voted out of office if we want their constituents' interests to be represented faithfully.

Then there's the large group of weaselers and wafflers, who could probably go along with tolls and not look too stupid (at least, not to anyone who wasn't actually paying attention).

Don't forget, Cap'n, that the majority in each house voted or was ready to vote for a bill that included tolls. The Republican State Senate supported CP, and the Democratic Assembly supported bridge tolls. However, in both cases the other house failed to vote for the same bill because of other political issues - the Assembly didn't accept Bloomberg's methods, and the Senate didn't accept taxes.

So no, it's not that the legislators would not vote for the tolls; it's that they have other political concerns, which sometimes trump their feelings on tolls.

What transit organizations do you think should be doing a better job?

I realize that this is after the fact:
The point of the public hearings is to make suggestions to the board members. Maybe there is a low cost way of saving a bus route. For example, I suggested rerouting the S66 bus on Staten Island to replace the S60 bus and they realized that the increased ridership as a result of the reroute would make it cost practically nothing. Since everybody wanted to save it, it made more sense to use my plan than to save it outright. They wouldn't have gotten public input on which routes are the most vital to save if they didn't hold the public hearing. As a result of the hearings, they gave back $8 million in service.