Adrift without an anchor

The vans really are MIA.

I realized yesterday that I have not yet actually seen an official "Group Ride Vehicle" on the street. Now I've spent more than three hours looking for them at various times of day on six separate days over the past week and a half.

I thought I saw two last Wednesday, but they definitely didn't have the official stickers. It's been suggested to me that they were "poachers" - commuter vans that were not authorized for this particular program.

At first I thought it might have just been Community Transportation that was either uninterested or incompetent, but then a reporter for the Brooklyn Courier waited for two hours on Monday without seeing a single B23 van. Okay, I thought, those aren't very promising routes; maybe the new and improved B39 "Hipster Shuttle" will have more luck. 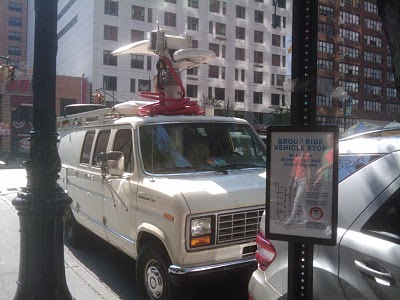 Yesterday I went to try the B39 and found this van in the stop at 14th and Irving. Needless to say, it wasn't going to take me to Brooklyn, and it wasn't there to cover the new van service. There were two guys standing nearby, probably Con Ed office workers on their coffee break, and they told me they'd been there for ten minutes and hadn't seen any "Group Ride Vehicles." I waited for fifteen minutes after that, but no vans showed up.

So if the vans weren't thee, where were they? I'm guessing on illegal runs where they knew there would be higher ridership. That would guarantee them a certain minimum income per hour.

Well, okay, but by doing this they're essentially guaranteeing that there will not be enough vans to provide frequent service, and as a result people will not wait for the vans, and these lines will fail, and they will lose an opportunity to expand their market to new customers. Why would they do such a thing? Why would they do absolutely no marketing? And why bother signing up for the pilot project if they weren't prepared for even a single day without customers?

I've been puzzling over this for the past week and a half. I've come up with some likely reasons, but I'm not sure that all of them apply, or that they're the whole story. My best guess is that it's the interaction of three facts: these van owners have never started a new route, they're used to keeping a low profile, and the structure is very decentralized.

For a lot of this explanation, I'm going to draw on the excellent analysis by Klein, Moore and Reja (PDF), particularly the notion of minimal scheduled service as an "anchor" that brings in customers. But really, the concept of an anchor should be familiar to anyone who's started or expanded a business. Basically, you can never be sure that customers will appear out of nowhere, no matter what you're selling, and you need to be prepared to go for six months without any income, and a year or two without any profit. So you keep your restaurant open for the full hours even if it's empty, until word gets around and it stays full. Judging by the number of restaurants that I've seen close within a month or two of opening, it's not uncommon for people to fail to plan for this possibility.
Posted by Cap'n Transit at 11:24 PM

You took the words right out of my mouth: If you aren't willing to run the service, step aside so somebody else can. How can they expect people to ride those routes when there are no vans for them to ride in?

True, but according to the solicitation from the TLC, there could be up to three groups running vans on the route. It's telling that they only got one for each. I wonder what the TLC offered to get the associations to agree to participate?

Nothing. The TLC offered nothing. This is why no vans are there. The owners wanted to "own" the routes and the TLC said no. Nobody wants to build routes "so the MTA can come back". The commuter vans are used to not trusting the city.

I know a few commuter van drivers. They aren't out there to do anything different. They are out there to make money and they aren't interested in waiting 90 days. They probably told their base that they would try it for a week and see how it goes. No one bothered to say that publicly, but I bet that was the deal.

After suing me to pull legal buses off the street in July, the same group (NYCDOT) works with the TLC to implement a van program in a manner that they KNEW would not work. This is why the union no longer felt the need to run the B71. Why spend money on a program that would not last even 30 days? The point is simple: they offered all of these communities an option that wasn't a real option.

I guess the next logical step is to get a real plan together to operate these services.