Who's prepared for a loss leader? 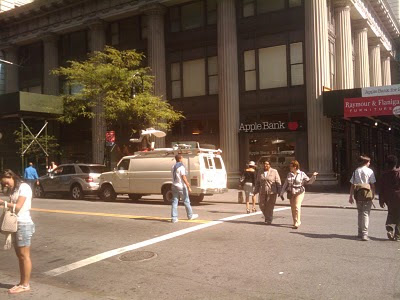 Yesterday I observed that the new pilot van project is shaping up to be a bust because (a) nobody's marketing it, and (b) the vans aren't showing up. I don't know for sure why this is, but my guess is that it's the interaction of three facts: these van owners have never started a new route, they're used to keeping a low profile, and the structure is very decentralized.

The main factor, I think, is that this is a very new situation for everyone involved. The operators are mostly Jamaicans and Haitians who have their experience running the dollar vans in Flatbush and Jamaica. They started up during the transit strike in the 1990s, and have been going ever since, but I've noticed that they don't seem to have expanded. For example, It seems fairly obvious that if you go to Jamaica and you go to Flatbush, you might want to connect the two and maybe serve Crown Heights and Brownsville as well. As far as I can tell, that service doesn't exist, and the routes are very similar to the way they were when they were started.

The Chinatown vans seem newer, but they travel on express routes with no direct competition, and were serving a pent-up demand when they started. The Jamaicans, the Haitians and the Chinese have all lived under the shadow of the repressive commuter van laws, which meant that they had to be very subtle about marketing their services, so when they finally have the opportunity to do real advertising and PR, they shy away from it.

The whole structure is weird, too, at least with Community Transportation. The city contracts with Community, but Community only owns a small number of vans, maybe even just one. The rest of the vans are independent contractors who work for Community, and if they don't want to drive a route, the company management has very little power to force them.

I'm guessing that the individual van owners aren't prepared for the upfront costs of providing anchor service. They probably operate on very thin margins and don't have enough money to go for more than a day without bringing in something. They also probably don't feel much ownership of this project, and thus not much desire to see it succeed.

The decentralized ownership in Community Transportation thus leads to a situation of perverse incentives. The people who are most committed to seeing the Q74 pilot succeed - Bloomberg, Goldsmith, Yassky and Ricketts - lack the power to actually compel the vans to show up. The people who have the power to provide service - the actual van drivers - don't have much stake in the project. In this way it actually reminds me quite a bit of the congestion pricing campaign.

What's the answer? Very simply: figure out ahead of time whether the market is (to use Klein's terms in this PDF) "thick" (has enough passengers to support jitney service right off the bat) or "thin." If it's thin, you can't just run a few vans and expect people to flock to them. Someone has to be responsible for marketing and anchor service. And I think it's pretty clear by now that all five routes are thin markets.

Fortunately, in this pilot project it's not too late. The TLC's solicitation of interest in the project mentioned that they would allow up to three groups to participate in each route. I bet they wouldn't say no if a credible private group offered to take on the route with the most potential (I'd say the "hipster shuttle" between Alphabet City and Greenpoint) and commit to (a) spending at least $1000 on advertising, and (b) running vans, empty or not, at least every fifteen minutes, 7AM to 1AM, for the rest of the ninety-day pilot. From what I've seen, that's what it would take to actually get a route like this going.
Posted by Cap'n Transit at 11:03 PM

Cap'n Transit - I think you've answered your own questions as to why the vans are not appearing on these discontinued bus routes:

1. The organizational structure of the vans is a disincentive, as each van driver has to cover his own costs out of the farebox.

2. The vans (in this country in almost all cases) have developed by competing with existing bus services or replacing bus service in a strike. That is, they needed to know a large market existed before they began to provide service.

On a related topic, there was an op-ed piece in today's (Saturday, 9/25/10) NY Times on why vans are the wrong approach. I (and I assume your other readers) would be interested in your thoughts on the points made there.

Thanks for letting me know about that silly op-ed, Planner. George, a version of your proposal has already been successfully implemented.