The case of the missing vans 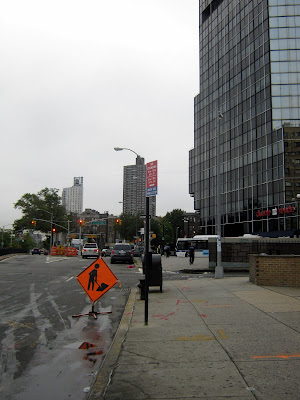 The big transit news this week is that the Taxi and Limousine Commission began a pilot of their pilot jitney program. On Monday, vans allegedly began running between three of the old Q74 stops, two on the edge of the Queens College campus and one at the Kew Gardens subway station (PDF).

I say allegedly because I waited for an hour at the subway on Monday morning, and no vans showed up. I knew I was in the right place, because there was a nice guy from the TLC handing out flyers for the vans that never came. Fortunately the stop is right in front of a Starbucks with a convenient patio - and I wasn't in a rush.

Okay, maybe there was some problem in the morning. I went out to Queens College in the afternoon. I passed by Gate 2, where the NY1 story was shot, and there were no vans. I asked a hot dog vendor if he had noticed people getting on vans, and he said no.

I walked over to the third stop, on Kissena Boulevard, and waited. No vans. A large number of students emerged from campus at 4:30, but most of them took the Q25 in one direction or the other. A number of people actually did sit down and wait at the stop, but they were just waiting to be picked up by friends or relatives, in private cars.

The vans are being operated by Community Transportation Systems, run by van pioneer Hector Ricketts (PDF). He's admitted to the News that ridership was lower than expected. Of course, showing up definitely helps, but in general, there's a lot of problems with the way this service has been marketed - or not marketed. I'll get into them in a subsequent post.

Transit in New York, and across the country, is in a bad state. There are two ways we could get out of it. One is for government to institute a wholehearted Keynesian stimulus involving full funding of transit operations and expansion, while avoiding dumping dollars into the "roads and bridges" money pit. I'd love to see it, but I'm not holding my breath. The other, where the market will bear it, is for the government to get out of the way and allow private operators to provide transit service. This is a test of that second strategy. No pressure, guys.
Posted by Cap'n Transit at 11:40 PM

You seem surprised, Captain. Although, the fact that the TLC guy was passing flyers is a pleasant surprise. The rest is expected.

Not everyone has the tolerance for building a new market. There are too few marked stops and no fixed schedule. The pre-marketing has been horrible. 20 riders on the first day isn't going to make their van payment or insurance or fuel. Hector is a smart guy and I'm surprised that he is already making huge mistakes. The TLC isn't the only one responsible for marketing the service.

Ideally, the service would be a truly privatized service. The only difference between the Q74 and the dollar van should be that the private van uses smaller buses and is run using non-unionized workers. The stops should be the same as the original Q74 stops.

Instead, they make the van inconvenient to use by only having 3 stops. The key to having a good transportation system is to make it accessable. If you make it accessable to everybody, you may be able to get more riders who are in a rush, and don't care that they have to pay for a second transfer.

I was just at CB meeting where Commissioner Yassky came to discuss the van line that will replace the B71. Cap'n... your account of opening day is not at all what Yassky had described, but is indeed what he, and everyone in the room, feared. I highly recommend calling 311 and giving them the details as he acknowledge it is a system with many kinks, and one that they will be constantly evaluating. If it winds up that the private operators cannot make it work after just a few months, they will certainly re-assess. It is only a pilot and still considered a supplement, not a replacement. It's certainly got potential... but only if done right. Thanks for the report!

George K, that is the only way it would work. It seems that the powers that be don't want to be accused of allowing vans to operate on a fixed route, so they are going to screw up the ENTIRE pilot with three stops on a route that had 15-20 stops each way.