Navy Road and the projects

Ben Fried at Streetsblog said it all in just fifteen words:


How About an At-Grade Crosswalk Instead of a Ped Bridge With Fencing Over Navy Street?

But because he said it in the middle of a "Today's Headlines" post, I think it didn't get picked up the way it should have. I would have tweeted it, but it's hard to pick out.

I'm going to blather on about this for much longer than Ben just so that you might get the idea that there's something here, and pay attention to it, and maybe tweet a link to this post. But really, Ben said just about everything that needed to be said. If you like, you can stop reading and make your views known to the DOT and NYCHA and Councilmember James.

One of the reasons I write this blog is because there are things that get under my skin, and I just need to answer them and get it out there. One of them is people who think they've got a wonderful pro-pedestrian solution that nobody's thought of: pedestrian overpasses.

Sometimes pedestrian overpasses are the best solution. For example, when every other crossing of the Long Island Expressway involves fighting with half a dozen turning cars driven by entitled jerks, it's really nice to have your own little ramp with no cars around. In Strong Towns terms, pedestrian overpasses are good for crossing roads, which are in turn built to get cars from one place to another as fast as possible.

Most of the time, though, pedestrian overpasses suck. They're at their worst when they cross streets that have wide sidewalks and retail, like I've seen in Santo Domingo. In these cases, a driver who wants to cross the street has a huge advantage over the pedestrians who have to climb up, over and down. Underpasses, as used on Queens Boulevard and in Paris and London, are just as bad. In Strong Towns terms, pedestrian overpasses are bad for crossing streets. In fact, they're one of the ways that streets get turned into stroads.

So now let's turn to the topic of Ben's tagline: Navy "Street." The Brooklyn Paper story he linked to gave the basics: Navy Street is a popular route between Fort Greene and Park Slope to the south and the Manhattan Bridge and the Brooklyn-Queens Expressway to the north, and for two blocks in between (joined together into one superblock) it passes between two subsidized public housing projects, the Farragut Houses (population 3,440) and the Walt Whitman Houses (population 4,276). There are buffered bike paths on either side of the street, and fences blocking pedestrians from accessing or crossing the street from the projects. In the middle of the superblock there is a pedestrian bridge across the street from one project to another.

Every once in a while, some young sociopaths get the idea that it would be fun to go up on the bridge and throw things at the cyclists passing below. Last August, they hit computer programmer Stephen Arthur in the face with a brick, seriously injuring him. The city responded with typical bureaucratic non-solutions: they first stepped up police patrols of the area, and now they're going to cover the overpass with a mesh fence.

Ben's one-liner gets to the heart of the problem: why is Navy Street like this in the first place? 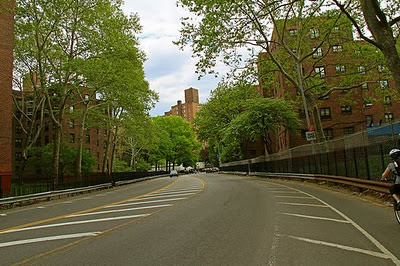 Photo: cisc1970 / Flickr
In Strong Towns terms, this section of Navy Street is not a street, or even a stroad. This is a road. It has fencing on both sides for the entire length. It's been about twelve years since I spent much time in that area, but I seem to remember that there was no bike path, just four lanes of car traffic. This road was designed to speed cars through the projects to the Manhattan Bridge and the BQE, without stopping or interacting.

If I lived in those projects, I would probably detest Navy Street for cutting my home off from other parts of the city and bringing noise to my building, just so that outsiders could get through the area faster. If I were an alienated teenager who'd spent his whole life as the target of abuse and discrimination from white people who were mostly well protected behind glass and steel, I'd want to throw something at those cars. And if I saw a less-protected, slower-moving, well-fed-looking white guy going by, I might just throw something at him. It's not right, but I understand where the impulse comes from. In some sense, you could say, they're angry at Bob Moses for designing the projects and the road this way, and at all the people who supported him, and at all the people who maintain this degrading Corbusian environment. They can't throw bricks at them, so they throw them at Stephen Arthur.

By putting in the bike lane, the DOT acknowledged that drivers going to the BQE are just not important enough to justify four lanes of traffic. The bike lane was a good start, but as Ben says, they need to finish the job. Arthur already asked the city to take out the fences, so that if the kids throw things at him again, he can at least try to chase them, but that would be counterproductive. The DOT needs to take down the road and put in a street that serves the project residents and not just the people passing through. As you can see from the pictures, there's room to put sidewalks all along the street. In the unused "open space" NYCHA can put out benches and tables so that other residents can sit by the street, and those eyes on the street may deter potential thugs. Maybe even, as Holly Whyte suggests, have movable furniture, good public bathrooms and food vendors.

With the extra lanes and the fence gone, the cars will be going so slow that there will be no need for a pedestrian bridge; it can be replaced with a raised crosswalk. Hopefully then the residents can meet the cyclists passing through eye to eye, as equals, with respect, and no one will want to throw anything.

If you've read through to the end, at this point you may want to make your views known to the DOT and NYCHA and Councilmember James. Or maybe you want to donate to Streetsblog, so they can keep paying Ben Fried for those great insights.
Posted by Cap'n Transit at 1:11 AM

Great story and one that I hope a lot of people hear. The challenge of restoring streets (love how Strong Towns starts by defining terms again) is that we can't just snap fingers and fix them. It will take time and painful transitions. We need people who are willing to "see them through". Thanks for keeping us posted.

I like the thinking here. But it's also important to recognize that drastic road/street makeovers are simply not on the DOT's agenda.

They've had so many opportunities to enact these makeovers, and certainly they have executed projects that seem revolutionary for NYC street patterns. But really, even in those situations of drastic change, what have they done? They have slapped paint down. They have perhaps laid a sand/epoxy mix on what used to be smooth asphalt. Sometimes they put in huge planters to keep vehicles from crossing into pedestrian areas. In a few cases they've put small curbed islands for pedestrian islands, the most durable, permanent change among any of the current DOT regime's projects. They've left the actual street infrastructure alone, mostly. Times Square, Madison Square, Union Square, Kent Avenue in North Brooklyn... all of these "makeovers" involved cheap, portable, short-lived, easily reversible changes to the street pattern. They made their changes so that they could backtrack if needed, and they spent as little money as possible so that a street transition that failed would not become a fiscal and political laughingstock for the administration.

I understand why they did that, but it means that these redesigns are faulty. They're not yet permanent. They don't feel like welcoming space for pedestrians. They still feel like you're walking in the road. There's a lot of empty space without furniture, as if citizens were mostly expected to bring their own equipment or amusements. In a lot of cases, they're unsafe, with traffic curbs still left in at odd places for unsuspecting people to trip over. Paint fades, and surprise surprise! - the DOT isn't all that quick to restore road markings at these new, tricky intersections of bikes/peds/cars when they are stripped by weather and constant use. On the side of not being too critical, sometimes these things have worked out for the better - for example, the idea that food trucks can still access these areas (as long as you pull a planter aside) is pretty nice. But these are still haphazard street designs. Mostly because they're not designed and they're hardly engineered. They are still roads under the paint.

This is important to talk about because it really does seem like the DOT has only pursued the lowest of the low-hanging fruit in some of these initiatives, in both design and implementation, and they can do a LOT better. There's no political conspiracy. The city simply needs the vocal political and budgetary support to enact better, more durable changes. They need enough community voices, friendly press, and dedicated funds to drown out the Louise Hainlines and the Steve Cuozzos and other NIMBYs of the world.

Going back to the Navy Street project, the road makeover being proposed here seems brilliant... and it also seems drastic and expensive. (It is difficult to dig curbs and concrete foundations out of the ground... and it is expensive to pay union workers to do it) It is definitely NOT the sort of "paint and run" low-hanging fruit of road makeovers that the prior Navy Street effort entailed. Painting an unbuffered bike lane is a project so simple and cheap that they could probably put prison laborers on that detail. Taking down an overpass, removing long lengths of fences and heavy guardrails on a highway connector, installing welcoming, useful, safe and permanent pedestrian infrastructure... not simple and cheap. It needs to be done regardless. Like I said above... it just needs vocal political and budgetary support to enact better, more durable changes. That is a situation that transportation advocacy in New York City, despite our successes, has not reached yet.

We'll keep working on it.

I grew up In Howard Beach, Queens and spent every day of Junior High using a pedestrian overpass/prison to cross the North & South Conduit highways to get to school. Some kids would occasionally crossing at grade when running late, though things didn't work out so well for them usually. A few were hit, and all were terrified at the traffic speeding above the 40mph limit there. I realize it is a feeder road to the Van Wyck and Belt Parkway, but when people live and work on either side, and need to get a cross every day, enormous pedestrian bridges are a half assed solution to the wrong problem. A giant slingshot is just as good a technical solution, but it still is devoid of humanity. Making our streets 'livable' is the only way to properly get people from point A to point B in an urban environment.

Thanks, Juan, and thank you all for the comments!