A number of commenters mentioned New York City, which does have several Really Narrow Streets south of Fourteenth Street. With the help of this Forgotten NY post, I've identified the narrowest streets in Manhattan and got a rough measure of their widths using Google Earth. There are ten of them under twenty feet wide:

On Tuesday I happened to be walking through Lower Manhattan and I snapped my own cell phone pictures of some of these Really Narrow Streets/alleys. 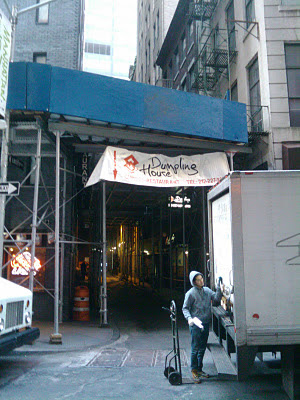 Liberty Place
Note that Liberty Place is covered with ugly scaffolding. So is Catherine Lane: 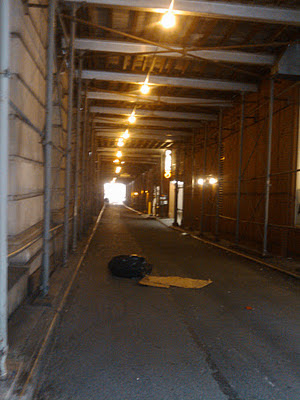 Catherine Lane
It seems to be almost entirely used as a driveway for that parking garage. 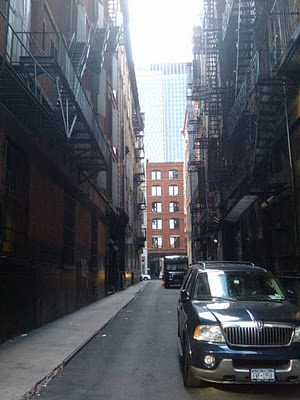 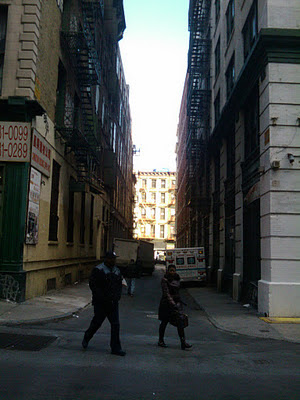 
The big thing I always get asked to find are dank dilapidated alleys, and New York City has, like, 5 alleys that look like that. Maybe four. You can’t film in three of them. So what it comes down to is there’s one alley left in New York, Cortlandt Alley, that everybody films in because it’s the last place. I try to stress to these directors in a polite way that New York is not a city of alleys.

It seems like it would be possible, maybe with some zoning changes, for some foresighted developer to take one of these streets, open a bunch of vibrant storefronts and market the hell out of it so that every tourist stops there for shopping and street food after they visit Ground Zero. It might take a year or two, but I could see one of them becoming New York's answer to Bearskin Neck or the Rue Sous le Cap. In Strong Towns terms, think how much tax revenue the city would get from such a tiny amount of infrastructure.
Posted by Cap'n Transit at 4:00 AM

And while it's been years since I've been there, New Street (and Exchange Place, which I guess is too wide, although generally closed to traffic) have a good number of storefronts that would make them good really narrow streets in my book.

I love a good narrow street. There are 2 great one in Hoboken. They are called Willow Terrace,off willow Av between 6th and 7th street. They are lined with great tiny houses. A bit farther away, the hilly Greek Island of Santorini has some great narrow streets. But the best narrow streets, by far, are in Amsterdam.

Lower Manhattan has some really narrow streets elsewhere. Those aren't alley-wide, but are still too narrow for ordinary car traffic given the amount of pedestrian traffic they get. For example, take Stone Street.

It's a one-way street with parking on one side. Not bad for an outer borough.

Come to Philly. Tons of beautiful streets that size even in Center City with 20 story buildings.

Sump'in been percolating in the back of my addled brain... cities with canals. Amsterdam's streets are very wide, they have canals running down the center of them. Venice - it's aterial streets are canals. Very difficult to stroll down the middle of a canal.... It's a lot easier to jaywalk across Seventh Ave or Seventh Ave south than it is to jaywalk across a canal...

Most of Venice's canals are quite narrow, actually - about 10 meters wide or a bit wider, with a few more minor streets closer to 5. The only really wide street it has is the Grand Canal.

Likewise, Amsterdam's city core has very narrow streets. (Though, the other cycling mecca, Copenhagen, does not; when I Google Earth-tour it, its streets look like your normal New York and Philadelphia streets.)

Much as I like San Francisco, I've come to realize that it has a severe lack of narrow streets, especially in the outer residential districts. There are very few streets that are less than 40 feet wide--plus sidewalks--and it means that every street regularly has people driving 40mph+, and isn't terribly pleasant to walk on, despite the generous sidewalks. I wonder sometimes if there's any way of repairing it, but cars have established themselves very firmly, and every square foot of land that can be used for parking is jealously guarded.