I concede defeat on one aspect of the density thought experiment: the commenters convinced me that there are places that don't have "the density to support transit" even if everyone who wants to go anywhere takes the transit. Phelan, California and Fort McMurray, Alberta may be examples of this. However, there are three aspects of the story that I'm sticking to:

1. If these places can't support transit, most of them probably can't support roads either. That's "support" either in the sense of inducing enough tax revenue to pay for their construction and maintenance, or providing a public service that would be considered worth the investment. 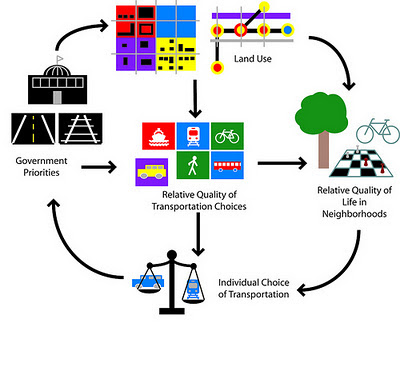 Image: Transit Nerds (Jeff Wood) / Flickr
3. As Jonathan said, if you make driving expensive or unpleasant enough (or if you just don't bother to make it cheap and comfortable), people will move to places where they can access things easily through walking and transit. That's the transportation-land use cycle that I identified in 2008 (here seen in a cleaned-up version by Pantagraph Trolleypole).

So the next time you're tempted to say something about "the density to support transit," ask yourself these three questions:

1. Would transit work if it had a better mode share?
2. Does the area have the density to support roads either?
3. Would people live or work more densely if the car infrastructure was less subsidized?
Posted by Cap'n Transit at 1:08 AM

On point 2 in Phelan, you're absolutely right. The area's a tax sinkhole, because nothing out there is worth anything. A good majority of the roads aren't maintained, and the tax revenue in the area still probably doesn't pay for the two that are. And a good proportion of the people there would likely move away if they couldn't continue commuting "down the hill" by car. And don't mention the energy that goes into water infrastructure...

I honestly think the place isn't suited for any sort of sustainable human habitation, and that in a post-petroleum world it'd probably be razed to the ground.

Thanks for the mention, though.

My Uncle Arch lives in Fort McMurray. He used to live in Vancouver, but like I and most of my relatives, was born in Newfoundland and Labrador. Especially since almost a year ago, my bigger brother Andrew (no really, he's 10 years older than me) moved to Regina, Saskatchewan.

I love the fact that you ask if the density supports roads either. Unfortunately, roads are always considered to be a given, but transit is something that must always wait.