There's been a lot of brouhaha lately about New York University's plans to expand its main campus, and the (sometimes successful) efforts of the Greenwich Village Society for Historical Preservation to thwart and scale back those efforts. As a former Village resident, I feel the GVSHP is wrong, but so is NYU.

I've lived in the Village and been a regular visitor all my life. There's something about the Village that's never felt right to me, but I've only recently acquired the vocabulary to describe it. It's Bleecker Street. It's also Houston Street and West Third, but I feel it most on Bleecker, in part because I avoid that part of Houston.

Bleecker Street is dead to me. I don't mean that the Red Lion has seen better days, although that may be true. I mean that when I walk from Sixth Avenue to Broadway on Eighth or West Fourth Streets, there's always something going on. There are stores, or NYU buildings bustling with students, or there's Washington Square. When I walk on Ninth or Tenth Street it's almost all residential, but with beautiful brownstones and carriage houses, and lots of stoops with interesting-looking people coming and going.

This is important because the Village has one concentration of shops around the subway stations at Sixth and Seventh Avenues, and another around those at Broadway and Lafayette Street. I regularly find myself on a trip to the Village with one thing to do near Sixth Avenue and one near Broadway, and I'm not the only one. There's steady traffic from one side of the neighborhood to the other, for work, shopping, entertainment and study. There's no direct subway connection, and the one bus is slow and unreliable, though, so most people walk.

When I walk down Bleecker Street, it's a jumping, happening place from Sixth Avenue (or even Seventh) to La Guardia Place. From Mercer to Broadway it's quiet and residential, but it works. From La Guardia to Mercer, Bleecker Street is dead. There's one ugly driveway on the north side and a couple of pedestrian paths on the other, in a stretch that's two blocks long (Wooster Street doesn't go north of Houston). The rest is just blank walls on one side and windows with curtains drawn on the other. Yeah, there are a few trees. So what? They don't help.

Houston and Third Streets are similar, at least on one side, and so are Mercer Street and La Guardia Place. Third Street is actually worse, because it's much wider in that area, and much less pedestrian-friendly as a result. Why are they this way? There are two black holes that are sucking the life out of those streets, and they have names: Washington Square Village and Silver Towers. 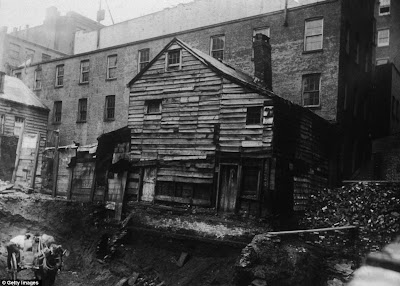 Photo: Jacob Riis, View of a back-lot house on Bleecker Street between Mercer and Greene Streets, almost toppling into an excavation site.
There is some interesting history behind these superblocks, fairly well summarized in the Wikipedia articles I linked in the above paragraph. The area was considered a slum in the days of Jacob Riis, and beginning in 1954 it was condemned, cleared and divided into three superblocks. The north superblock was given to NYU, and it now holds several NYU buildings. The central superblock was given to a private partnership including Paul Tishman, who built Washington Square Village, with 1200 apartments over a 650-unit parking garage. The south superblock was originally given to the developers, but after they couldn't get financing it was turned over to NYU, who built the Silver Towers and a Mitchell-Lama building over an underground parking garage. In 1964 the developers sold Washington Square Village to NYU, giving it control of all three blocks.

I'll write more about the current fight - and the problems with what both sides are saying - later.