What I would pay for a comfortable ride

Three years ago I wrote a series about comfort, class and transportation. I observed that when it comes to transit, many segments of the population are too old for this shit. Some people are poor enough that they can't afford anything better and have to put up with the subway all the time. Some people take local buses, some take express buses or commuter trains, and some take taxis. Some people buy cars.

I don't want to buy a car. After seeing someone killed by a car, I simply don't want to be the person who kills someone else through a momentary brain fog. That option is closed for me.

I've tried local buses. Here in Queens they're not like local buses in Manhattan. They rarely parallel a subway line, so wherever I go they serve people without any other option. That means they're usually full of people, and at least some of those people don't know how to use cell phones or earphones. 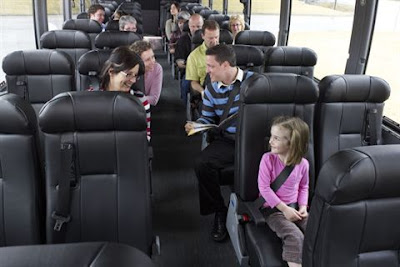 I'd take this minus the seat belts. Photo: NHTSA.
I'd love to take commuter rail or an express bus, and I'd be willing to pay the full $5.50 or $6.25. Unfortunately, the commuter trains from here only go to Penn Station, and I almost never need to go to anything near Penn Station. There are no express buses that stop anywhere in Sunnyside or Woodside - anywhere west of the BQE in fact.

That leaves taxis or car services. But those are just a little too expensive. It's almost always at least $10 including tip to go anywhere in Queens, and usually more. Manhattan is $20 or more. I can afford to pay up to $7 each way, but $20 is not worth it.

I'm not faulting the car services. We're talking one guy who is devoting all his attention (well, maybe 90% of his attention if he's on the phone) to taking me to work. He deserves the money. But I don't really want one guy to be driving just me around. I'd be happy in a bus or a van, with one guy or woman driving six or ten or twenty of us around.

With these choices, you can see why some people buy cars. The best way to get them to stop buying cars is to offer a ride to Manhattan at a higher price point - $5.50, perhaps - and see if enough people will take it. There is a real demand for service that is a cut above the subway. That need is being felt even more urgently today, since I threw my back out last weekend. It would help, of course, if the buses had a lane of their own so that they can be even close to time-competitive with the subway. But I would leave earlier, and pay up to $7.50, for a ride that would guarantee these things:
I have to say that I myself am bothered by the idea of a more expensive class of transit. I still remember the disgust and disapproval I felt for the first-class cars on the Paris metro and commuter trains. Why would I want to replicate that?

I have to keep reminding myself that there is a class system in transportation, and there always has been. Transit cannot create a classless society by itself.
Posted by Cap'n Transit at 12:35 AM

If I could just get away from the (usually) men coughing up phleghm balls, I'd be a happy commuter.

There are first-class cars on some commuter trains in Japan. They have commuter-style 2+2 seating rather than subway-style seating, and have more seating space and fewer doors.

I honestly wouldn't mind there being a first class car on subways/commuter rail so long as the ticket price was high enough that it more than covered the total operating cost for the car. Use the money wealthy people are willing to pay to avoid sitting with us average folk to help pay for the system, while still keeping them out of personal vehicles.
Could be a bit of a win-win, at least on the routes that aren't at or past capacity.

Most subway systems used to have first class cars. They were generally abandoned when the crowds got so large that it became not-worth-it to maintain the enforcement necessary to check first class tickets.