The defeat of the power broker

Robert Caro’s The Power Broker is one of the all-time classics of urbanism, assigned in many courses and read even by casual students of history. Caro intended his biography of Robert Moses to be an examination of the nature of political power, and how powerful people rise and fall, as evidenced by the title and by his follow-up multi-volume study of Lyndon Johnson.

What is surprising to me is how often people pair Moses with Jane Jacobs and talk about their conflicts over Washington Square Park and the Lower Manhattan Expressway. You could even get the impression, from the way that some people tell it, that it was Jacobs who brought Moses down. It’s true that Moses and Jacobs showed a striking clash of ideologies and worldviews, but Caro spends very little time on Jacobs, focusing instead on the conflicts that Moses had with the mayors (LaGuardia, Wagner) and governors (Smith, Roosevelt) that he nominally served. 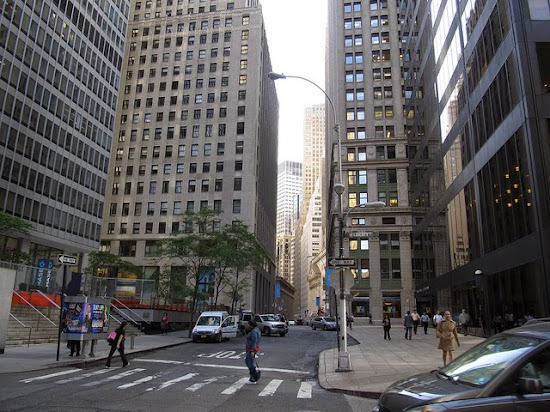 Chase Manhattan Plaza. Photo: Ken Lund / Flickr
I am also surprised by how few people got through The Power Broker with any understanding of how Moses was eventually overthrown. I found that to be one of the most captivating parts of the book, like the way the Ring of Power met its fate in Mount Doom. I was in awe once when I got to visit the Chase Bondholder Services Office (not in the same location, but still). And yet I have not heard anyone else mention that part of the story.

I think the main reason nobody talks about how Moses fell from power is that nobody wants to think about it, and that’s because it’s not fair. Moses was not brought down by Jane Jacobs – although she may have helped to finish him off. He was not destroyed by a hobbit, or even a Gollum.

The people who were finally able to take away Moses’s source of power – his Ring, the Triborough Bridge and Tunnel Authority – were two of the most powerful people in the country. Heirs to a multi-million dollar oil fortune, David and Nelson Rockefeller controlled, respectively, one of the largest banks in the country and one of the wealthiest states. Nelson would go on to be Vice President a few years later. And yet, neither brother could have defeated Moses by himself: it was only by combining their powers and working together that they were able to create the Metropolitan Transportation Authority and swallow Moses’s TBTA.

On the face of it, this is not a very inspiring story. Want to defeat a despotic, unelected, arrogant man who is destroying your cities? Sorry, you can’t do it yourself. You have to trust in two plutocrats, one elected, one not, each responsible for his own Corbusian excesses (Chase Manhattan Plaza and Empire State Plaza, respectively). You have to trust them to be strong enough to make it really work (instead of, say, leaving a bunch of free alternatives to the bridges and tunnels funding the subway system), and not to fuck it up (by, say, leaving its funding at the mercy of the notoriously corrupt and undemocratic New York State Legislature). It’s less like Frodo and Gollum, and more like Eärendil calling in the Valar, if the Valar were a bunch of Republican bankers.

But as I think about it, it's not like there was even an Eärendil. From what I can tell, the Rockefellers never talked to a single subway rider, or anyone whose home or business was displaced by their projects or those of Moses. As Bob Fitch explains it in The Assassination of New York (which everyone should read; you can get a taste from this Doug Henwood tribute), the Rockefellers were mainly motivated by their failing real estate investments in the West Side (particularly Rockefeller Center). Getting the Chrystie Street Connection and the Sixth Avenue express tunnels built was a priority, at least for David, so he needed to see the subway capital plan funded for a few years minimum.

I think that’s the true lesson of The Power Broker: sometimes the thing that gets rid of one tyrant is just another tyrant. Sometimes the interests of the new tyrant align with your own enough that you can get something decent going. Sometimes the new power is not a single tyrant but a junta, and its power is diluted by that fact, making it slightly less dangerous. This leaves an opening for smaller powers to come in and get a piece of the action, further diluting the power. It ain't democracy and it ain't fair, but it's better than having Bob Moses screwing everything up.

Any way you slice it, it's not very inspiring for those of us who aren't Rockefellers. And that's why people prefer to talk about Jane Jacobs's minor victory over Moses.
Posted by Cap'n Transit at 12:48 AM

"Sometimes the thing that gets rid of one tyrant is just another tyrant."

Yep, that's pretty much the way of the world. There seems to be a human tendency never to see it this way, though: the first tyrant is always either manifest "evil" or "good," and once overthrown, the second tyrant will purportedly be the polar opposite.

I saw this mentality in the comments on this description of Havana: http://www.city-journal.org/2014/24_2_havana.html

My impression from the book is that it was ultimately missteps by Moses himself that weakened him.

For what it's worth, to me three of most interesting parts of the book were:
1. Moses got his popularity in the first place by demagoguing against rich people in the course of his blatantly illegal seizure of that estate on LI.
2. While Caro does not dwell on this, Moses seems to have gotten much of his power because he was the conduit for large sums of federal money, overwhelming politics on the local level.
3. The Brooklyn-Battery Bridge was only stopped on the specious grounds that it would interfere with the operation of the Brooklyn Navy Yard. I think my reaction to that part was probably similar to your reaction to the Rockefeller episode. (I also suspect, but do not know enough to resolve the issue, that Caro is exaggerating the role of the Rockefellers; it doesn't seem like Moses had gotten much of what he wanted for years by that time.)
You may have guessed that I am politically somewhat to the right of you.

So, is it better to have a tyrant who got stuff done, or tyrants who left things to stagnate?

Ideally, the tyrant should die without a clear heir and with disunity among the various factions of advisors. I suspect American democracy owes a lot to George Washington's lack of children.

Alternatively, the tyrant could be incapable of either running anything or blocking others from running things. For examples, Britain's George I, the Japanese Emperor after the Meiji Restoration, various monarchs controlling faraway territories in name only, and Rob Ford today.

Honestly, the most important thing is for the tyrants to be (a) not crazy and (b) not stupid.

Really, people didn't complain much about Emperor Augustus; he was smart, sane, and competent. On the other hand, his successors... weren't.

The main problem with Moses wasn't that he was a tyrant -- it was that his plans were so terrible! In the end his plans were so bad that they were damaging the value of the Rockefellers' real estate, as this explains!

I thought people didn't complain about Augustus because he and Mark Antony had killed off all the complainers.

I have yet to read the Power Broker, but I absolutely adore the Tolkien references here.

Also, tyrants are only problems if they don't do what you like. If Moses used his power to build the 2AS instead of highways, we'd all love him.