The McCarter Highway, freeway without a future

Back in March I was honored to nominate Newark (together with Michael Klatsky) for Streetsblog's coveted Parking Crater award. I'm also pleased that Newark's nomination helped inspire Sharon Adarlo to write about how the obsession with driving and parking among Newark's elites "skewers [any] chance at revitalizing the struggling city." And I'm encouraged by the quote from Newark's new mayor, Ras Baraka, that "We are going to build up and not across. We are going to look at stormwater runoff."

Now I want to mention another aspect of that obsession that's holding the city back: its roads and streets that are designed to prioritize drivers over pedestrians.

The Congress for the New Urbanism regularly puts out a list of "Freeways Without Futures." These are usually "urban" highways that not only blight neighborhoods with noise, pollution and ugly elevated structures, but cut off neighborhoods from each other and from jobs, shopping and amenities like parks. I've suggested that the designation be extended to include highways like the Pulaski Skyway that aim a "firehose of cars" into walkable dense urban areas that are well-served by transit. That said, here's a highway that fits the current CNU criteria quite well: the McCarter Highway that leads north from Newark to Paterson, New Jersey. 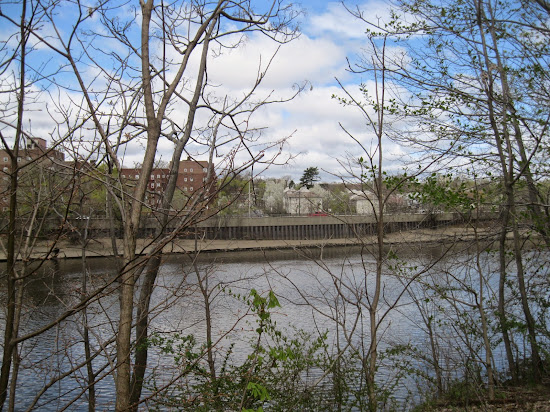 Cutting off the waterfront in Passaic
The McCarter Highway was once a boulevard along the Passaic River, and still is a boulevard through most of Newark. As Steve Anderson describes, the section from northern Newark through Passaic to Paterson was "upgraded" to a limited-access highway in sections from the 1950s through the 1990s. To make room for the highway in Passaic, the old Erie Main Line was abandoned between the Passaic River and the Paterson station.

When it was being planned and built, I'm sure a lot of people saw the McCarter Highway as evidence of progress. The waterfront was either industrial, blighted or both, so most people didn't care that they were cut off from it, just as they didn't care about the West Side Highway in Manhattan or the Embarcadero Freeway in San Francisco.

But as with the West Side Highway and the Embarcadero, I think people didn't realize how a limited-access highway could be much more destructive than a factory or a slum. From its fifteen exits (depending on how you count them), the McCarter Highway spews cars into Newark, Belleville, Nutley, Passaic, Clifton and Paterson. It takes up some of the most valuable land in these towns and pays no rent or taxes. It spreads noise, gas and particulate pollution. Oh, and it's impervious to stormwater, Mr. Mayor.

The Passaic River may not look like much in this area, but without the McCarter Highway it could have a riverside park with a promenade and bike path. The highway not only cuts Newark and Passaic off from the river, but from towns across the river like Arlington, East Rutherford, Lyndhurst, Wallington, Garfield and Elmwood Park.

With rents rising in Brooklyn, Harlem and Jersey City, many residents find themselves having to move, and many of them are moving to Newark, Passaic and Paterson. They deserve the same amenities in their new homes that they left behind: good urban parks and good walking connections to the surrounding areas. They don't deserve to breathe carbon monoxide and listen to speeding cars, and they don't deserve to see those cars speeding off the highway into their neighborhoods.

This is why New Jersey should tear down the McCarter Highway and replace it with a calm, low-traffic boulevard, an extension of the Newark City Subway, a riverwalk and bike path, and some flood-proof apartments.

(Oh yeah, and the oppressive pedestrian environment in Branch Brook Park is a whole other post.)
Posted by Cap'n Transit at 1:11 AM

Excellent idea, Cap'n! I lived in Newark when I was little and have been back many times since. The riverfront has potential to improve the city once the highway is gone.

Thanks for the mention on Downtown Newark!