The O Train to Avenue H

One subway expansion proposal that always gets mentioned by people, but has never gotten any official funding or planning, is the "TriboroRx" line, using the Port Morris Branch, the New York Connecting Railroad and the LIRR Bay Ridge Branch to bring riders from Yankee Stadium to the Brooklyn Army Terminal, passing near the commercial centers of Astoria, Jackson Heights, East New York, Flatbush and Midwood. 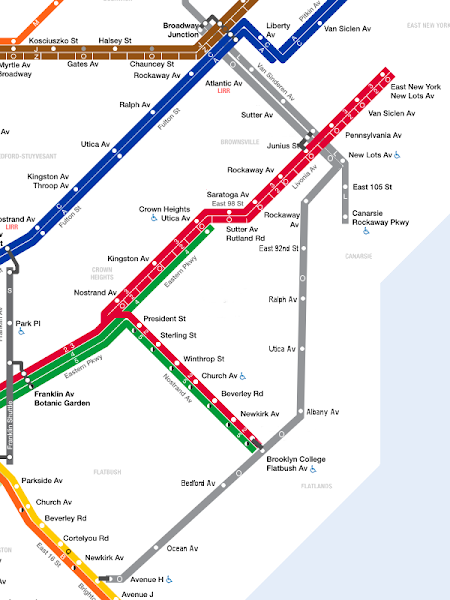 In 2007, Michael Frumin modeled the potential demand for the line, and found promising results. When he was hired by the MTA I hoped it was a sign that there would be some planning, but it looks like they just wanted his modeling skills.

Some segments of the line only have room for two tracks: the New York Connecting Railroad from the Hell Gate Bridge to Fresh Pond Yard, and the Bay Ridge Branch from the Brighton Line to the Culver Line. The tracks are still used for freight, and will see more use if the Cross-Harbor Rail Freight Tunnel is built.

There are significant bureaucratic obstacles to running reasonably priced passenger service on the same track with freight trains, and overcoming those obstacles would require an amount of political will that no leader has shown recently. The alternative to sharing tracks would be lots of digging, concrete and steel to double-deck the line in those parts, either above or below grade. The Port Morris Branch, currently abandoned and neglected, would also require significant upgrades before it can be used by passenger trains.

Because of this, I suggested that we start the ball rolling by extending the G train south past 18th Avenue and west to the Brooklyn Army Terminal. I also suggested that we run trains along the section between the Brighton Line and Broadway Junction.

The map above shows one such possibility, proposed by the MTA as part of the "New Routes" plan in 1969. Under this proposal, the L train would be split into two routes. At Broadway Junction (or maybe Halsey Street) they would diverge, with one continuing to the L current terminus in Canarsie.

The other branch, which I'll call the O train, would travel parallel to the L within the right-of-way of the Bay Ridge Branch, skipping a few stops but connecting to the 3 train at Junius Street. It would then follow the Bay Ridge Branch west through past Brooklyn College (with a transfer to the 2 train), terminating at the Brighton Line with a transfer to the Avenue H station.

This is only one possibility. Another way to handle it would be to run the B trains 24/7, turning them east on the Bay Ridge Branch to Broadway Junction - although riders in Brighton Beach and Sheepshead Bay would probably complain about losing express service. A third would be to have the O and B trains overlap, providing more frequent service.

That seems to be all that can reasonably be done with the existing trackage without sharing tracks with freight trains or pouring lots of concrete. There is a four-track section between Broadway Junction and Fresh Pond Yard, but there's not much reason to send L (or J or C) trains up there. If you've ever taken the M to the end of the line you'll understand why - it's not much of a destination.

Running trains on this section would bring train service to a large section of Brooklyn that currently has none, and provide access to potential sites for new housing in these areas. There is no need to wait for a full build of the "TriboroRx" line - that was just somebody's idea. It should be explored now.
Posted by Cap'n Transit at 12:26 AM

The best solution is to either widen the narrow parts of the ROW or just kick freight off. There are a handful of freight trains a day, it costs multiple billions of dollars to build the Cross-Harbor Tunnel for only a few more trains per day (if I remember correctly, the EIR predicts 14 trains per day per direction if the tunnel is built), and conversely there's potentially very high passenger rail ridership. It's similar to the situation on the Caltrain corridor, except the potential passenger rail ridership is much higher since it's an urban rather than suburban line.

Instead of a subway and whatever fight you'd run into trying to get rid of freight completely could this be a good place to get a foot in the door for more efficient commuter rail operations? Take modified M8/9s with fewer seats, wider aisles, POP or faregates, and a lower city fare?

It would let you piggy back off any MNR to penn plan for part of the line.

I doubt it. The junctions, especially 74th/Broadway, are likely to be busy enough that the trains will need many doors, as on the subway. A 60' BMT car has almost three times as many doors per unit length as an M7/8/9, and this matters at busy junctions.

Any reason not to just call it the X train? O is a bad idea because no one would know if it was a 0 or and O.

People keep saying that, I don't understand why. Nobody would think it's a 0 train because there is no 0 train.

That just make it harder to recycle old MNR/LIRR equipment for this. So get new cars with more doors. Then on short runs on LIRR you can use the same cars. People lose seats but you get to run an extra train for them.

I don't think there exist mainline trains with this many doors in the Western world. Japan, sure, but its short-range commuter trains look identical to and have the same specs as subway trains.

Would adding doors to a modified M9 compromise the structural integrity of the train or make it less crash worthy?

I wish I could have run the line privately out of the farebox. It is an easy project up to Jackson Heights. I would use surplus LIRR equipment to get the ball rolling.

Ted: it wouldn't, but it might raise procurement costs significantly.

Significant compared to the cost of widening the ROW, digging down, or building up so you can have freight and non FRA trains, or buying out whoever you would need to if you want to just kick freight off of the Brooklyn segments?

I don't know. The narrows between East 15th and McDonald aren't an expensive part of Brooklyn; ROW widening may not be very expensive, especially not by the standards of what some people in the region want to sink on an underwater tunnel.