The transportation hypocrisy of civil libertarians

It was in the news yesterday that the Drug Enforcement Administration paid an Amtrak employee over $800,000 over twenty years for confidential passenger information that it could have gotten for free. The Albuquerque Journal reported in April 2001 that they were getting it through "a computer with access to Amtrak's ticketing information." People like Senator Grassley are spinning it as government waste, but to me there's a bigger story: why should Amtrak have given this information to the DEA in the first place?

That was the response of the American Civil Liberties Union of New Mexico back in 2001, and they were then "pondering whether to take legal action." A few months later they clearly had bigger fish to fry, so it's understandable why this issue went on the back burner. 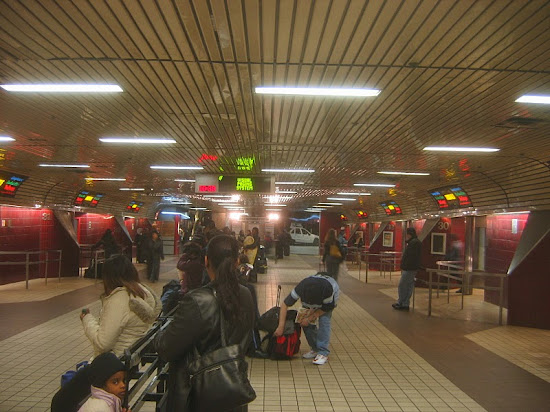 Photo: Joseph Barillari / Wikipedia
What's not understandable is why transit freedom has gone on the back burner, and pretty much stayed there, since 2001. Some of you may actually be too young to know that before then, you could board an intercity bus or train without giving your name or showing identification. You just walked up to the ticket counter and handed over your cash.

I've been taking Trailways buses since I was a kid, and I remember when it all changed, sometime shortly after September 11, 2001. I walked up to the ticket window at the Port Authority and asked for a ticket, and the person asked for my name. "Why?" "Security." "I don't want my name on some list!" "Nobody's going to put your name on a list." I sounded like a goddamn schizophrenic. After some back-and-forth he said, "Just give me a name!" Okay, I gave him a name that could plausibly have been a nickname for me, but wasn't, and he put it in the computer - and on some list, of course. Soon after that, they began requiring photo ID or a credit card to buy the tickets. I think they even tried to get the drivers to check the photo ID before they let people on the bus, but that one at least didn't fly.

What has amazed me to this day is that there was absolutely no mention of any of this by anyone but me. People complain (with good reason) about taking off their shoes at airports and about no-fly lists, and even about draconian treatment on buses near the Mexican border, but I don't remember seeing a single mention of buses or trains requiring a name for intercity tickets. Hell, I still don't know what counts as intercity. I don't have to give my name for a ticket to Nyack or Poughkeepsie, but I do for a ticket to New Paltz.

But what really burns me up is when civil libertarians complain about license plate scans or toll surveillance. Driving is not a right, it's a privilege, especially in a place like New York where transit is plentiful. And these civil libertarians don't even acknowledge that the MTA has a record of the movements of everyone who buys a Metrocard with a credit card.

And yes, it's true that potential criminals or even terrorists can use buses and trains to move around. But we live in a free country, where it's not a crime to be a potential criminal or terrorist, or just someone who doesn't want to drive. Or at least we used to.
Posted by Cap'n Transit at 12:17 AM

Wow, I never even thought about this issue. Should get more airplay...

The bus and train companies have been all too willing to go along with this security theater since it gives them an excuse to reduce the value of your ticket without reducing the price. A ticket with a name attached is not transferrable, hence more likely to go unused for one reason or another, and less valuable to you, as well as more profitable for them.

"I think they even tried to get the drivers to check the photo ID before they let people on the bus, but that one at least didn't fly."

I have had to show ID to board Trailways buses out of the PABT in the last six months.

Somebody occasionally talks about it, e.g. Systemic Failure here ("How TSA policies make us less safe") and this bit on Streetsblog about DHS spending for "transit security." I gripe about the ID requirement infrequently on Twitter and elsewhere.

There are the occasional TSA overreaches that get a rise such as the infamous Savannah pat down incident, but you're right, this stuff needs to be talked about more.

Even without any security-related measure, there are good reasons to stick a name to tickets - preventing them from becoming cash substitutes on themselves.

This is more of a issue on longer routes, where price can vary, airline-style, according to advance purchase, some targeted marketing etc. If you have price differentiation based on costumer and moment of purchase, but not nominal tickets, you can easily create a "scalper market" for people buying up cheap tickets and reselling them on eBay later on.

To preserve the ability to charge passengers like an airline, with some paying much more than others on the same vehicle, data and hour, you need to have some form of identification that is not easily transferable. Name is the the common way to do that, there are a few others but they are clumsy.

The Chinatown bus lines don't require a name or ID to buy a ticket, and will happily sell them to walk-up customers for cash.

Megabus and Boltbus require a credit card to buy a ticket, but they are fully transferable, the ticket number written on your phone or a bit of paper is all you need to board the bus. They don't seem to have any significant problems with scalpers undermining their heavily price-discrimination-based fare structure so I don't think 3sigma's concerns are that much to worry about. Also in practise I believe you can use an anonymous prepaid Visa/MC giftcard to make the online booking (though I haven't tried this).

Amtrak theoretically performs ID spot checks onboard trains but I've never seen one happen. They do ID if you purchase tickets in person but if you bought tickets online with a giftcard or someone else's credit card it's unlikely you would have to show ID in practise. (Unless you encountered one of the ICE checks on a train near the Canadian or Mexican border.)

Trailways and Greyhound seem alone amongst ground transport providers in actually enforcing ID checks on every passenger. I have no idea why they do this, as other providers' lax policies demonstrate the lack of legal or business reasons to do so, and they shut themselves out of a nontrivial part of the market (notably many undocumented immigrants) as a result.

I think Amtrak conductors have asked me to show ID once or twice, but I no longer remember for sure.

At any rate, Richard Mlynarik routinely rants about this, including even the price discrimination angle. Apparently, the laws mandating showing ID when flying domestically in the US were passed due to airline lobbying pressure to kill off the secondary ticket sales market. It's a forerunner of the modern-day Google/Facebook surveillance state, in which major companies destroy your privacy in order to market things to you just the way they think you want them.

Showing ID makes no sense. All it proves is that you have ID. Which you don't need to have.

PABT is mostly interstate travel, and Ive never had to show ID to board a Suburban/Coach bus. Id would be ridiculous if they did.

(The German is from past regimes. Present-day Germany, a free country where the main danger to civil liberties is espionage by foreign powers rather than domestic spying, does not require people to carry ID.)