Frequency is the key to van success 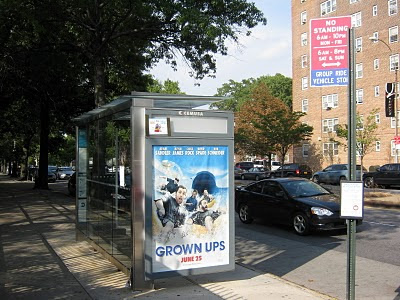 Anna Gustafson of Yournabe had a nice report on the van pilot press conference, and asked a key question that nobody else seems to have bothered with:

Let me say right away that I have my doubts as to whether these frequencies will actually be adhered to. But if they are, it would essentially doom these services. Jarrett explains why low frequency drives people away:

Frequency is best described by headway, the elapsed time between consecutive trips on a line. The headway is also the maximum waiting time, and half of it is the average waiting time. Add those to the much-advertised travel time (technically called in-vehicle travel time or IVTT) and you have a sense of how long a real-life trip will be. And those are the realities that will ultimately drive ridership.

Let's imagine a Queens College student who gets off the E train at 10:00 AM. The headway is thirty minutes, making the average wait time fifteen minutes. Google says that it takes nine minutes to drive from the subway to the college, and if we add five minutes for picking up and dropping off other passengers, it's about half an hour total time.

However, Google also says that our student can get to college in half an hour by getting back on the E train and taking the Q88 bus from Forest Hills. In fact, it's probably a lot less than that, because our student is already on the train, so they either get off one stop early or one stop later and catch the Q64. That bus has fifteen minute headways and eighteen minute in-trip time, for a total of 25 minutes.

What this means is that if the vans can't offer a headway of fifteen minutes or less, they might as well pack up and go home. You can do similar calculations for the Q79 and the Brooklyn runs. Long-distance private bus services like Coachusa can run on half-hour headways because they've got a near monopoly and a customer base that has been riding these lines for almost a hundred years; these vans can't count on anything like that.

As I said before, I'm not sure that these headways were anything other than a way to give Gustafson an answer without getting into a long discussion on jitney economics. It may be that Ricketts is planning on anchoring the cascade himself at these headways, but that he plans on adding vans whenever there are enough passengers to make it worthwhile.

With a private service, however, that anchor has to be cross-subsidized by other runs; otherwise it's just a waste of money and eventually it will be shut down. The pilot program runs for ninety days, which means that if ridership hasn't risen to profitable levels by December 20, the vans will go back to Jamaica and Flatbush. What are Ricketts and the Taxi and Limousine Commission doing to make sure that it does rise?
Posted by Cap'n Transit at 12:00 AM

The Q79 is a different situation than the Q74. The reason being that the Q74 competed with other routes for ridership, and there were other alternatives available: Taking the Q64 from Forest Hills, taking the Q88 from Woodhaven Blvd (if the local train is right across the platform), taking the Q46 to the Q20/Q44, and taking the Q20/Q44 from Jamaica, depending on which direction the passenger is coming from.
The Q79 runs on a corridor that has very little competing service-the only alternative is to travel to Springfield Blvd and back, which adds about 30 minutes to the trip.
Therefore, comparing the Q74 and Q79 is like comparing apples to oranges-the Q74 might not even be able to survive with 15 minute headways because of all the competition (not to mention, they offer transfer privileges, which the dollar van does not), whereas the Q79 might thrive with 15 minute headways.
By the way, what are the stops for the Q79 dollar van?

The Q79 is harder because there is no subway to transfer to. Youu will have to go bus-subway-van or LIRR-van. That is going to be a colossal challenge.

But I just can't picture a lot of the Q79 riders being destined for the subway. If they were, they would probably save their transfer and walk over to another local route that would take them to the subway. A lot of the riders probably wanted to go to the LIRR, and, if that is the case, the van company will have to try to time the vans to meet the LIRR.

Is there a way to ensure those buses reliably adhere to schedule, so that people can remember when they will arrive and plan accordingly?

You mean the vans? I guess they could post schedules on a website and possibly even at the stops. But that doesn't really fit with the way these vans usually operate (fill up and go), or with the way that the TLC set up the system (pick up only at designated, widely spaced stops; drop off at any agreed-on point).

George, you can find maps with all the stops for each route linked from the TLC's page.

Thanks for the link Cap'n.

Now whether those weekend runs will be profitable to the operator remains to be seen. They may be better off starting out with weekday service and then expanding their service to weekends.

By the way, is there any chance that the MTA will put these operators on their map? If they did it before with Jamaica, Triboro, Command, and other bus lines, I see no reason why they can't do it with thse lines.

Wait, if the vans are fill-up-and-go, then what's the point of even having fixed frequencies?

Well, there's this. But I'm not sure anybody's thinking that clearly.