From Sheepshead Bay to City Hall

On Saturday I wrote about the abandoned Manhattan Terminal at the foot of the Williamsburg Bridge, where trolleys used to turn around, allowing their passengers to transfer to the BMT Centre Street trains (now the J/Z) and, after 1936, to the E train (now the F). In addition to the trolley terminal, the Centre Street loop was four tracks, two from the Williamsburg Bridge to Chambers Street and eventually connecting with the Montague Street Tunnel (now used by the R train), and two from the Manhattan Bridge intended to connect with the trains from the Brooklyn Bridge. The tracks across the Brooklyn Bridge were removed and the tracks from the Manhattan Bridge reconfigured to connect to the Sixth Avenue line, and two of the Centre Street tracks have now been abandoned.

As I wrote four years ago, that means that these two tracks are now available for additional service. In general I think we shouldn't give rail infrastructure to buses, and I would ideally like to see the old Tomkins and Nostrand Avenue trolleys rebuilt.

In the meantime, I would be willing to see these relatively short tracks used by buses. In particular, the Nostrand Avenue Select Bus will be running from the Bridge Plaza bus station in Williamsburg south to Sheepshead Bay. It will connect to the 2, A and J trains at all times, the 3, C and M trains during the day and the 5 and Z during rush hours. But the transfer to the J/M/Z at Bridge Plaza is not particularly convenient, involving walking a block and a half, crossing busy streets, and climbing stairs.

What if instead the buses continued across the bridge and into the tunnel, where they could whisk passengers right to existing stations with transfers to the N, Q and R at Canal Street and the 4, 5 and 6 at Chambers Street, and the J and Z at every stop? 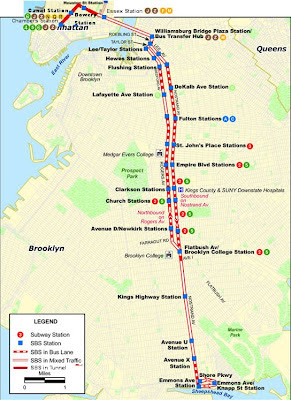 What if the Nostrand Avenue Select Bus went across the bridge?
There are similar challenges with ventilation as there are in my proposal for the trolley terminal, but with hybrid or natural gas buses we could keep emissions to a minimum. You might argue that the buses would still get stuck in bridge traffic, but not if we gave them a dedicated lane. We might not be able to allow other buses, like the Chinatown vans and buses, into that tunnel, but we could allow them to use the lane on the bridge if there's room.
Posted by Cap'n Transit at 1:17 AM

Nitpick: "the 5 and Z during rush hours" Actually the 5 runs down the Nostrand Ave line all day on weekdays, since 2009.

Light rail from Brooklyn into the Nassau St tunnel is one of the best uses I have heard for the disused tracks and space. But what you are proposing would be a repetition of the horrible mistake made in Los Angeles, Ottawa, and elsewhere of paving over rails to build a busway. Converting the tunnel and installing necessary ventilation would be an extremely expensive capital project, and would subsequently make it much more expensive to convert back to rail, especially without severely disrupting service.

By contrast, tracks in the street are relatively cheap, so Nostrand Ave light rail is a genuine possibility in the not-too-distant future. Until then, the Nassau St tracks and Delancey St terminal should be left alone.

I have to agree... You are seriously underestimating the complexity and cost of putting buses through an existing rail tunnel.

I'm fairly sure that the tracks in the terminal, or whatever is left of them, were embedded in pavement, so running buses wouldn't preclude also running trains. Anyway, even if the tracks are still there in the terminal, they're useless without tracks over the bridge as well, and those are long gone, replaced by the inner lanes on the bridge.

One thing about the bus, by the way, is that if it doesn't get stuck in traffic, it would make for a much faster ride over the bridge than the train, since the train can only go about 20 mph, ever since they overcompensated for the crash in the early 90s.

@arcady: Buses could run on the bridge and possibly the Delancey St terminal without too much modification, but the trouble is Capn's proposal to pave the unused Centre/Nassau Street subway tracks all the way down to Chambers St, which would be extremely costly and impractical (especially for something "temporary").

Regarding the relative speed limits on the bridge: organisation before electronics before concrete!

Interesting. One aspect of this that might be appealling to some is the one-seat bus ride all the way into Manhattan.

Yeah, running buses down the Nassau Loop will be all kinds of problems. You can't do down to Chambers Street anyway, because the subway uses all four tracks there (the inner tracks for terminating M trains, the outer for continuing J trains). Even if you evict the M from the turnback south of Chambers, you still need to either do some major rearranging of tracks south of the station, or have a an underground subway-bus grade crossing. And if you terminate the buses at Canal, I'm not sure there's enough room to physically turn them around. Trains don't need to do that, buses do.

Extending buses beyond the Essex St trolley terminal would be a pretty difficult job. You'd have to somehow get around the "BJ" connector tracks (the track connections between Essex St & Bway-Laff) currently used by the M. Nor is there sufficient space to turn around an articulated bus anywhere beyond Essex St. Best bet: give the south inner roadway over to select bus service and terminate it in the old trolley terminal. The only two caveats: 1, the inner roadway is very narrow, was designed for two trolley tracks. I drove the B39 bus for a short period on the bridge back in '72-'73. It was a tight squeeze for a bus - and you were expected to keep in your lane. The cops gave out tickets from time to time for hogging 2 lanes. Two articulated buses passing in opposite directions - now that's a tight fit indeed. And 2, hope the old trolley terminal has sufficient space to turn around an articulated bus.

@arcady: When was the last time you looked at a subway map? Chambers St hasn't seen an M train in nearly two years, they were diverted to Sixth Ave with great fanfare in 2010. The middle pair of tracks is no longer used in revenue service. Anyway, rerouteing the tracks either side of Chambers St has been done before and would be the least of the difficulties for a project like this. (A much bigger problem is how the buses would turn around.)

@capt subway: Narrow lanes could in principle be dealt with by making the inner lanes into a "guided busway" as seen in Adelaide and some other cities, with concrete beams on either side of the lane and small guidewheels fitted to the sides of the buses to keep them in line. (Though this would make the lanes incompatible with other buses and emergency vehicles). Rail would make a lot more sense however.

Also, it's probably best to take one lane from each side of the bridge; taking two eastbound (and no westbound) lanes seems likely to infuriate motorists even more than taking one on each side, for little benefit. (The intersections at either end of the bridge need to be rebuilt either way.)

Connecting the Delancey St terminal to the unused Nassau St tracks is a problem, but not in itself insurmountable. It would require about 250m of cut-and-cover tunnel, but Delancey St is very wide so getting around the junction to Chrystie St should be feasible.

Rerouting the tracks at Chambers hasn't really been done before: as far as I know, the current arrangement is the way it was build and put into revenue service. There were some rearrangements under Canal Street, specifically connecting the south pair of Manhattan Bridge tracks to the Broadway express tracks instea of the Nassau Loop. But that was in conjunction with building the Chrystie Street connection: here we're talking about something quick and easy. Getting around the Chrystie Street connection track would take at least 600 feet of new tunnel, and that's assuming the existing track layout leaves any room. And then you need to rework the area south of Chambers Street, as well as the station itself. There might just be enough room in the station to turn buses around, but again, it'll require some reworking of the station. So now this is no longer a quick and easy fix: it's something that costs at least tens, if not hundreds of millions of dollars. Is it really worth it?

Well, there were definitely some changes when the extension from Chambers south to Broad St opened in 1931 so it's not the same as when it first opened in 1913. I was mistaken about it having changed much since 1931, but a similar amount of rearrangement to what would be required for light rail to terminate there was done at Canal St less than 10 years ago, see http://www.columbia.edu/~brennan/abandoned/canal.html .

I agree that the high costs costs of a busway conversion would not be worthwhile. The lower costs (and higher benefits) of a light rail conversion seem worth considering, but even then there are a lot of other projects in the city that are probably more deserving of funds.