The vans that run on Flatbush are typically cramped fifteen-passenger Ford Econolines, with ropes to allow the driver to close the sliding doors without getting out of his or her seat. The Jamaica lines have some cutaway vans with automatic doors, but there are still a lot of Econolines. The Chinatown buses are almost all cutaways, as are the ones on Bergenline and Kennedy.

It's on the high-volume, high-income Boulevard East route that you see the biggest difference. That's where you can find tour minibuses and even full-size buses. I once rode on a school bus, but it was a brand-new bus with modern seating, not some crappy high-backed bench seats. 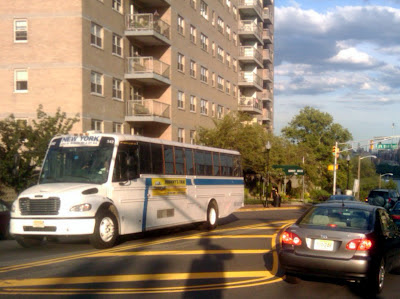 The obvious question is why the vans on Flatbush don't really get upgraded. Typically, when a Flatbush van driver gets a little extra cash, the van gets a little bling: a fancy paint job, some decals, maybe a better sound system. Why don't the drivers buy bigger buses, or at least ones with automatic doors? What do the Jersey and Chinatown vans have that the Brooklyn ones don't?

The best way to know is of course to ask the drivers. At this point I don't have those connections, but maybe someone reading this does. I can make some guesses, though: it's the regulatory environment.

Even the drivers in Brooklyn and Queens who say they're "legal" just mean that they're authorized to operate a commuter van somewhere in the city. Nobody has the right to legally pick up passengers on the street. Because of this, even the "legal" operators face the possibility of large fines on every run. The expense and the uncertainty don't justify additional investment.

By contrast, any bus operator that crosses state lines is protected by the Interstate Commerce clause of the Constitution, and can legally pick up passengers on the street in either state. The New Jersey vans, therefore, can only be fined for violations like polluting or causing a hazard. The owners therefore have an incentive to replace their vans when they can no longer pass inspection. The State of New Jersey is also prohibited by law from engaging in "destructive competition" with private transit operators. If a van passes inspection and obeys traffic laws, it should never have to pay a fine.

So why do the Chinatown vans get upgrades? My guess is that they're better capitalized. Each route is run by a single company that assumes at least some of the risk of fines, while the Flatbush vans seem to all be run and financed by individual operators. The Chinese-American owners may also be able to get outside financing from their immigrant networks at levels that are unavailable to Jamaicans and Haitians.

This is also related to the disastrous failure of the Taxi and Limousine Commission's 2010 "Group Ride Vehicle Program." It relied primarily on Jamaican van operators and their decentralized model, which does not have enough capital to run a loss for any significant length of time.
Posted by Cap'n Transit at 12:56 AM

The reason that the individual operators don't do it is because most of them want to keep their visibility low. There are a few exceptions (City Express and City Link have minibuses that do lots of corporate work). Technically, all of the legal commuter vans are required to meet all NYSDOT bus rules (CDL, Article 19A), but are not allowed to stop in bus stops. That is discriminatory. Your hunch about centralized ownership is also correct.

Without irritating my lawyers involved in my company's current case, the funding that the MTA and other subsidized operators obtain is based on squeezing out the private sector. If they were to actually stop harassing private transit, the amount of tax money to run the public system would naturally shrink. In NJ, NJT is happy when private operators do work that they can't because "it saves them money".

Federal protection is very helpful, but a nuance of federal law is that some routes can be operated under federal law WITHOUT crossing state lines. I would have never found that out if NYC wasn't harassing me.