Something for the drivers

One of the biggest objections I have to "Gridlock Sam" Schwartz's proposal to reinstate tolls the East River bridges is the extent to which it goes to provide "something for the drivers." It is based on a serious misreading of the objections to Bloomberg's congestion pricing proposal and Ravitch's bridge toll plan, and if it succeeds it will be an empty victory.

Schwartz correctly observed that the vast majority of the objections to the congestion pricing plan and the Ravitch plan came from drivers. Unfortunately, he failed to grasp why they objected. Sure, they came up with all kinds of reasons, like "it's wrong to charge people to access a part of the city," and "it's a regressive tax." But none of these reasons made any sense, and if they weren't so dead set against the idea of tolling the bridges they would have known that. 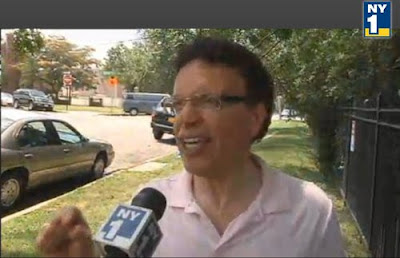 Jimmy Vacca knows those fuckers are giving you a shitty deal.
The fight against congestion pricing was almost entirely symbolic, like the numerous actions that Jimmy Vacca has taken: deactivating parking meters on Sundays, getting rid of the parking violation stickers, and enshrining a five-minute "grace period" in law. These drivers view their status as car owners as either a birthright or a hard-fought victory. It is a symbol of their worth and their station in life, and when the city slapped a sticker on their cars it turned that symbol into a badge of shame.

For the past hundred years the "free" bridges and streets have been a potent symbol in their own right, demonstrating that the city may not be able to do much, but they're doing all they can to promote driving, and drivers are their top priority. The NYPD's ticket-fixing, the DCP's minimum parking requirements and the widespread tolerance of double parking have had similar symbolic value.

Already, the actions of Janette Sadik-Khan have made drivers less welcome in parts of Manhattan and Brooklyn, and they have encountered vehement opposition. The idea that a person who has put in years of sacrifice to become a car owner (or has inherited that status from their parents) would count no more, or even less than, some kid from Ohio who just sits around all day playing bad music or making artisanal pickles drives these people nuts with rage. But to charge a fee to cross the river would be the ultimate insult. If there are more important things for the city to do than to help responsible citizens navigate the streets with a free bridge or two, then the city has truly failed them.

Yes, of course they spend more time driving around the other boroughs than driving into Manhattan. Schwartz looked at that and thought that if he made it easier and cheaper for them to do that, they would allow tolls on the bridges. But this is not about money or convenience, and that's why nuts like Richard Brodsky are completely unimpressed. It's about symbolism, and Schwartz's plan would in fact reinforce that symbolic segregation by expanding the roads in the outer boroughs. There is nothing you can do "for the drivers" that would erase the symbolic humiliation of the government making them pay to drive into Manhattan.

You and I know that the road network is completely unsustainable, and that some day New York's drivers or their children or grandchildren will have no choice but to give up their cars. Some of them see the writing on the wall, and they may be willing to give in on tolls into Manhattan if Schwartz throws in enough goodies "for the drivers." But they may ask too much. They may ask for things that will make the bridge tolls worthless. Is Schwartz willing to give them those?
Posted by Cap'n Transit at 11:25 PM