In the past, I've talked about various negative aspects of parking. Basically, parking encourages driving, parking lots themselves are a special kind of hell, and parking takes resources (land, air, concrete, transit money, builders' money, politicians' time, people's time) away from more worthy uses. The only time I support parking is at the curb, when it replaces lanes for moving mixed traffic. Of course, the famous Donald Shoup has put some numbers on the High Cost of Free Parking.

Tonight I want to talk about garages. More than the one or two car family garages, I mean the big places to park cars that have something on top of them. Sometimes it's more layers of parking, sometimes it's a building. Just about every town bigger than 50,000 people - and many smaller than that - has some kind of multi-story garage, and lots of buildings now include a "parking pedestal" - a few stories of parking with a building on top. When these are at street level, they are deadly to the pedestrian experience, as Ben Fried at Streetsblog has shown on Brooklyn's Fourth Avenue. 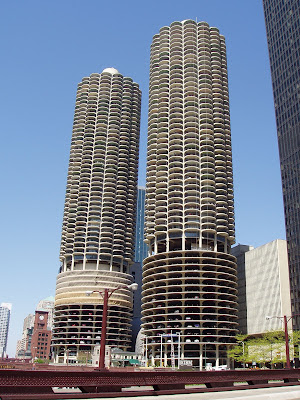 Chicago's Marina City is one of the most famous "parking pedestal" developments.
In response to that criticism, some architects have come up with the concept of a "parking sandwich": a building with retail on the ground floor, then one or more floors of parking, and then multiple floors of office or apartment space on top. This has been proposed for the Nyack Superblock, a site that now contains a large surface parking lot.

These multi-story parking garages are their own kind of hell. In Angel or really any violent television show or movie that takes place in Los Angeles after 1970, horrible things are constantly happening to people in parking garages. They're the deserted alleys of the Radiant City.

It's kind of understandable why politicians would want to build parking, or require other people to build it. If you take a short-term view of the world and think that everyone is just going to keep driving, then of course you want to build places for them to put their cars. But for those of us who think it's pretty likely that people will stop driving, it's actually painful to see so much land and air and time and money and materials going into building these things.

The problem is that once you build parking garages, they're really hard to retrofit. Often they're built with enough space in between the levels for cars to drive and people to walk, but not enough to be a comfortable place to live or work if you build floors on top of the concrete and ceilings underneath the next level. They've got these weird ramps - who's going to want their desk in the middle of one of those? Or your kitchen table - you'd be constantly getting breakfast in your lap. And the - I can't call them windows - openings to let light in and fumes out. Often they're the wrong size and shape for windows, usually too narrow. There is a plan to replace one of the hardly-used garages at Yankee Stadium with a hotel, but it would require tearing down the brand-new garage.

Look, most of these garages are already mandated by law. I would be much more comfortable if those laws simply went on and mandated that the garages have to all be of a form that can be converted to apartments or offices fairly cheaply. Sure, that's an additional expense that we're foisting on the builders, but the parking itself is usually an unnecessary burden, so what's a little more? If you're really concerned with the developer's bottom line, then just ease up on the parking requirements in the first place.

Can we do this? Build it into the zoning code? Require it for LEED certification? Let's take action now so that we don't waste too much more.
Posted by Cap'n Transit at 2:01 AM

The downside is that doing this will probably make the parking pedestal take up even more of the building, since the only reason for the sloping floors and low ceilings is to provide as many parking spaces as possible per cubic foot of building.

Would it be possible to turn them into gardens? Put in some raised beds and special lights, maybe grow food? There have to be other creative solutions for re-purposing a parking pedestal?

There are some interesting automated stackers which move cars around, which could allow for the use of higher-ceiling areas, as well as making the garage take less volume overall. I think they're cost-competitive with parking structures.

Existing garages could be used for warehouse and storage space, I suppose. I seem to recall reading about one in Vancouver, but I can't remember where.

I never like going into large parking garages, especially downtown ones. They're quite cramped for driving conditions, and some feel pretty unsafe with the lack of activity in them.

I do support building parking garages instead of paving large expansive surface lots for some suburban mistakes, er, locations however. There is one large suburban corporate campus near me with perhaps almost a square mile of pavement now, thanks to zoning in the 80's that prevented the company from building a parking structure when they first moved out to the location. The campus now operates a shuttle system to bring employees to the door. Transit serves the site, but the amount of weaving around buses go through to access this place as well as other campuses, with similar large lots, makes for a longer commute.

Rochester, MN has the right idea though, there was recently a push there to reduce parking requirements downtown after someone in charge realized the large percentage of prime downtown space dedicated to parking vs. housing and business. The plan was to require less parking and in turn encourage more transit usage and walking. I'm not aware of what has actually happened with that however.

Priority one should be to drop the mandated parking. After that, you could mandate that any parking built should be convertible to other uses. But it makes no sense to have mandated parking that is also convertible-- "you must make it possible to convert it, but you're expressly forbidden from doing that!"

One nice thing you can say about lots-- they're easy to redevelop. I can't say I like inner-city parking garages much. Publicly funded ones are the worst. They attract more traffic into the city center, snarling transit operations and making it politically impossible to introduce new ideas like Times Square in Manhattan.

It seems that TOD plans often incorporate large garages-- basically saying that it's ok to have transit as long as you invest even more in autos. The result is usually lackluster, with overly expensive apartments whose inhabitants don't use the transit all that much, while making the roads around them traffic-clogged and pedestrian-hostile, and adding to people's negative perceptions of TOD.

I'm not quite sure what to do in areas where there are skyscrapers and parking needs to be incorporated into bigger structures, but most areas have enough land that dedicated parking garages can be built next to other buildings. Then you at least have the option of tearing down the ramp and reusing the space another way.

I think there are a lot of New Urbanist types of designs where parking is put in the center of a block, with buildings surrounding it. I think my ideal would be to have that parking area shrink over time as the rest of the general area gets developed more densely (and therefore becomes more transit- and pedestrian-oriented). In the end, you might even end up with a green courtyard.

Integrated parking should probably be kept to a bare minimum. For residential, probably only in the range of 0 to 0.7 spaces per unit. Just have another parking structure (or even surface parking in some situations). Some parking can overflow from the integrated garage into the adjacent parking, and from there to on-street parking (though lots of people prefer on-street parking to either of the other two options anyway -- that's certainly the case at my apartment complex).

I wonder whether there are any buildings that have parking in a central column, using some sort of stacked elevator. That could use space that is furthest away from windows and thus not so useful for people.