I've had criticisms of the Tri-State Transportation Campaign over the years, but in general they share my goals and they do good work. Case in point is their report The Region's Most Dangerous Roads for Walking released back in March. Based on police reports, they provide maps of car crashes that killed pedestrians in 2008, 2009 and 2010 (although the Google Maps limitations make it hard to see them all at once), and they list all the stroads in the New York metro area and Connecticut where five or more people were killed over that three-year period.

It is in a spirit of constructive criticism that I suggest that fatalities per road is not the best way to compare roads. Roads have different lengths, so it makes more sense to compare fatalities per mile. This is a little tricky, because it usually involves some fraction of a fatality, but it you can get past that in your mind you get a better measure of dangerousness. So here, ladies and gentlemen, are New York City's most dangerous stroads, measured on a per-mile basis:


I should point out that there may be others with at least one fatality per mile, but not listed by Tri-State because they were less than five miles long. Maybe someone at Tri-State can take a look and share that data.

The scariest ones are short stroads like Brighton Beach Avenue and the Bowery. With two bridge exits crossing it, I know exactly why the Bowery is the way it is. You can see on a similar map, CrashStat from Tri-State member organization Transportation Alternatives, that the part of the Bowery up by Gemma and the old CBGB's is not the really dangerous part. Every year, three or four people die for the convenience of Staten Islanders. 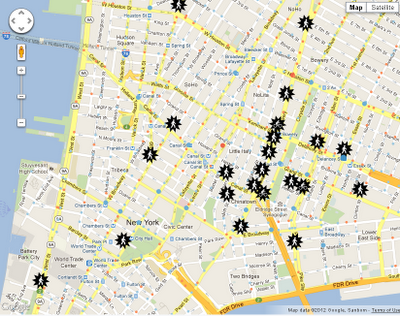 Crashes resulting in pedestrian or cyclist injury or fatality, 2007-2009, from CrashStat by Transportation Alternatives
But according CrashStat, the fatalities are pretty evenly spaced on Brighton Beach Avenue. Why six fatalities in three years?
Posted by Cap'n Transit at 11:34 PM

Streets that have more pedestrian traffic (e.g. 14th St, Broadway) will naturally see more fatalities than streets that are so obviously dangerous that pedestrians avoid them (e.g. Queens Blvd), but it hardly seems reasonable to call the latter streets "safer". I would be more interested in data that divided the fatalities per mile count by some estimate of pedestrian traffic, so that I can estimate just how much risk I am taking walking near the street in question. Do you know any sources of data on pedestrian traffic counts?