Recently I expressed doubt that the New York Metropolitan Transportation Authority could create an innovative bus service like the Koreana van between Flushing and Fort Lee. Commenter Three Station Square gave a couple of counterexamples: the M60, introduced in 1992, connected 125th Street in Manhattan with La Guardia Airport, and the S89, introduced in 2007, connects the West Shore of Staten Island with the Hudson-Bergen Light Rail. George K pointed out that the S89 followed part of the route of Joel Azumah's 144 bus, but that in turn had taken over the route from Red and Tan in Hudson County.

Most of the innovations listed by Three Station Square are tweaks, including the extension of the Q5 and Q85 across the city limits to the Green Acres Mall in Valley Stream. And they're good tweaks; we like them, right? Well, you can expect even those to go away if one of "Gridlock Sam" Schwartz's proposals is adopted. 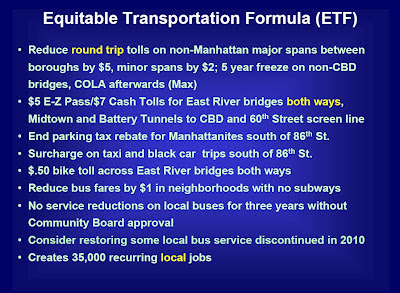 Schwartz's "equitable transportation formula" includes this point: "No service reductions on local buses for three years without Community Board approval." Sounds great, right? We hate service cuts, and we like community. More power to the community! What could possibly go wrong?

Any transit expansion advocate who's ever been to a New York City community board meeting knows exactly what's wrong with that. Many of the people who are involved in community boards are nice people who really want to do what's best for their city and their neighborhood. But the boards themselves are undemocratic and tend to be dominated by drivers and obsessed with increasing the supply of free parking. Their proceedings are almost always reactive and usually reactionary. They tend to stifle and oppose growth and innovation.

Some of you may be familiar with London's borough councils (elected by district) or Paris's district councils (elected at large). The community boards are nothing like that. Prospective members must be nominated by either their City Council member or the Borough President, and then approved by the Borough President's office. Some councilmembers and borough presidents value inclusiveness and a diversity of opinion, and some don't. Community board members are all volunteers, and the significant time commitment makes it difficult for people with day jobs to attend.

As a result, the boards tend to be dominated by people who are older and wealthier than the average for the district. In 2012 that means that they tend to own cars and drive them, to see driving and parking as an inalienable right, and to identify more with drivers than with pedestrians, cyclists or transit riders. The top issues they care about seem to be: (1) getting developers to provide more parking, (2) preventing anyone from interfering with double parking, (3) preventing traffic changes that they fear would overwhelm the neighborhood with cars, and (4) doing something about those damn bikers that almost ran over poor Connie.

Older and wealthier people also tend to be more interested in protecting what they already have than in getting more that they might use in the future. As a result, transportation discussions at community boards tend to be about preserving existing rights and privileges. There is very little interest in innovation. When they do support innovation, it's usually ornamental initiatives that present no threat to the car-oriented status quo. Why risk what you've worked so hard to get?

I have a number of friends who put in a lot of time and energy on community boards around the city. This is not to denigrate their efforts; it's important for someone to show up and make it clear that these aren't the only people in "the community." But I think they'd all agree that giving more power to community boards is a bad idea.

So why wouldn't I want to kill transit cuts? Because you can't have transit expansion without transit cuts. As I wrote on Sunday, for an agency to try something new, it needs to be able to cut it if it isn't working out.

In the case of across-the board reductions like we saw in 2010, community boards can't prevent the State Assembly from cutting the transit budget. They can only tie the MTA's hands as they try to deal with those budget cuts. Schwartz's proposal would not make the cuts go away. It would either force the MTA to borrow more or raise fares, or it would hold back service reductions on routes that are popular with influential community members, usually the elderly. Other routes would have to be reduced even more to compensate.

As with the bogus fairness, the elevated busways and the dollar fare reductions in neighborhoods with no subways, this is an idea that may sound nice to people who don't know that much about transit. But under scrutiny, it falls apart.

Yes, we need tolls on the East River bridges, and I agree with the many people who have argued that it will happen sooner or later. It's not worth all these bad things to make it happen sooner. Almost all of the elements in Schwartz's plan would lead to a net increase in driving citywide, and that's not what we're in this for.
Posted by Cap'n Transit at 2:07 AM

At our last community board meeting hundreds of us turned out to protest Greyhound installing a curbside stop in front of the children's playground.
These are ordinary neighbors, not the wealthy people you describe.
We simply want Greyhound and DOT to consider a different location.
Get off your high horse and stop being so myopic. We appreciate the benefit of mass transit and the environmental aspect. We also like to keep our children clear of bus fumes, added traffic, garbage in front of a very active park.