I've been unkind to Will Doig in the past; I think I called his frustrating police-our-own article about cycling "horseshit." It deserved a lot of criticism, but that was really not constructive. Despite that, Doig has been remarkably understanding and civil to me. He definitely deserves better, so I will do my best to be polite and constructive while tearing apart his latest piece about private transit.

Of all the problems with Doig's post, the worst is that it's a complete straw man. Personally, I don't really care if "libertarianism fails." It's kind of fun to see libertarianism fall on its face, but it's a hollow fun. LIbertarianism always gets back up and marches on, because its life force comes from a bizarre combination of Panglossianism, nature worship and abdication of social responsibility, so I've gotten kind of tired of cheering its failures. Plus, some of my friends are libertarians and when they're sad, I'm sad. 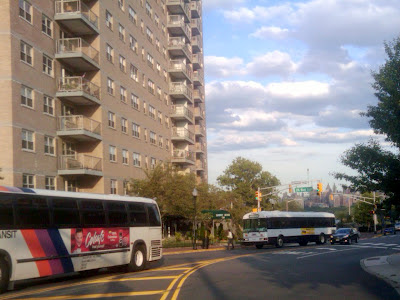 I'm upset when transit fails, because transit is one of our best tools to get people out of their cars. And I'm frustrated because Doig doesn't seem to realize that to the extent the Chinatown bus crackdown is a failure at all, it's one in a string of failures for transit. Taras Grescoe picked up on Doig's article and tweeted, "market romanticism is a dead-end." But as I wrote back to Grescoe, parochial state control is a dead-end as well. Doig says a lot about what the Chinatown buses have accomplished in the past several years, but he seems completely unconcerned at the idea that this could have come to an end, and that there's no hope for anything to replace them.

Of course the dangerous driving is a problem, and that's another part of the strawman: no libertarian I know would argue for private bus operators to be exempted from safety regulation, certainly not while regulatory restrictions remain on other forms of transportation. The Federal Motor Carrier Safety Administration exists for a reason, and most people applaud when they do their jobs. I honestly don't think that this crackdown will destroy the Chinatown bus system, or private intercity bus service.

Last night I asked for others to chime in on the problems with Doig's article, and libertarian Stephen Smith (@marketurbanism) wrote, "First of all, all I'm seeing are anecdotes. Four people died recently in vans operated by Chinese people?? OMG!" Stephen is right. Doig is blowing the whole thing out of proportion. While the number of people killed and injured by negligent and incompetent private bus operators is significant and should not be ignored, it's still pretty small and not worth destroying a transit system for.

Doig also suffers from transportation myopia here. As I wrote last year, to the extent that those bus trips replace private car trips, or enable car-free lifestyles, they prevent injuries and deaths. Imagine the carnage if all the Chinatown bus passengers were out behind the wheel. Think about the overnight gamblers, driving four hours to Foxwoods and four hours back after twelve hours on their feet in a restaurant.

Stephen continued, "Secondly, there are very few marginally profitable public bus routes in the US – there're no profits to poach!" This is not entirely true; in the New York City Transit system there are 23 bus routes that do make an operating profit, which is then used to run the 167 unprofitable routes. But the total operating profit in 2010 for these routes was only $27 million, less than a tenth of the combined loss from the other routes and 0.38% of NYC Transit's total expenses for that year (including all the subways). If NYC Transit turned over all the profitable routes to private operators it wouldn't make a dent in the budget.

So my constructive criticism to Will Doig is this: please get a sense of perspective! One of Doig's favorite formulas - and he's far from alone in this - is "The Hidden Downside of That Thing You Like." In this article he gets digs in at food trucks and pop-up parks as well. Next time I would appreciate if he asked the following questions: Is this Thing really so bad, when we compare it with all the other things like it? Of all the possible alternative things, how many are any better? How likely is it that we could have one of these better things?
Posted by Cap'n Transit at 1:18 AM

I am glad that the Feds shut them down. Dangerous buses raise insurance premiums and this libertarian dislkies that.