As I wrote last week, the transit portions of "Gridlock Sam" Schwartz's transportation proposal just feel kind of bizarre and divorced from reality. Sometimes it seems that the entire city's transportation advocacy discourse is dominated by drivers and cyclists. If occasionally a transit rider like Jay Walder may get a little bit of influence, they still don't get the support they need when the chips are down.

When drivers and cyclists make big plans that include transit, as in the current proposal from Gridlock Sam, the transit component runs the whole range of uninspiring, from mediocre (we'll consider restoring the 2010 cuts, but only on local bus routes) to other people's fads (elevated busways!) to WTF. The WTF in this case includes reducing the fares on buses "in neighborhoods with no subways" by a dollar, i.e. from $2.25 to $1.25.

Part of the problem here may be due to Powerpoint. It's possible that this is better thought out than it sounds, and it was edited into inanity to fit in one bullet point. But honestly, if your bus proposals don't get their own slides, what does that say about your priorities?

Anyway, so what's wrong with reducing bus fares to a dollar twenty-five in neighborhoods with no subways? In principle, nothing. But there are costs, and unforeseen consequences, and it's not clear what it will accomplish, if anything. The main cost is the opportunity cost: what else could we do with that money? Increase frequency on the buses; build bus bulbs or physically separated bus lanes; implement traffic signal priority or offboard fare payment. Or we could even use it to extend the E train to Valley Stream. With all these possibilities, why did Schwartz choose to spend the money lowering the fare?

Then there are the unforeseen consequences of lowering the bus fare. Many years ago I bought an "Apollo" inkjet printer for a hundred dollars; the sales people told me that it was made by Hewlett-Packard, and had the same technology as HP-branded printers. Why did HP go to the trouble of creating a separate company and brand for this printer? Because they didn't want anyone to see a brand new HP printer selling for a hundred dollars. They didn't want anyone to associate "HP" with "cheap" in their mind.

Buses already have a reputation in Staten Island, eastern Queens, southeastern Brooklyn and the eastern Bronx as cheap, crappy transportation for people who can't afford cars. A $1.25 bus fare will just reinforce that image. That's something that Schwartz seems to have no problem with - but it means giving up on the possibility that these areas will ever increase their transit mode share. I have a problem with that, and I hope you do too.

So reducing bus fares would spend money that we could instead use to expand the system and make it better, and it would probably reinforce the reputation of buses in the outer boroughs as cheap, crappy transportation. But is it worth that?

Well, is what worth that? Schwartz doesn't say what he expects to accomplish by reducing bus fares. On one level it seems obvious: save people $40 or more a week! But why save those people money, and not lower the fare for subway riders, and for people riding the buses in neighborhoods where there are subways? The answer can only be to encourage more people to ride buses in the outer boroughs. Presumably this is instead of driving, but it could be that Schwartz wants to encourage people to make bus trips that they wouldn't otherwise have made, or that they would have made by walking, but it's not clear to me what the value of that is. Mobility for mobility's sake?

It's not clear, anyway, that lowering the fare will do either of these things. To begin with, take a look at this chart from the most recent MTA Transit Committee meeting: 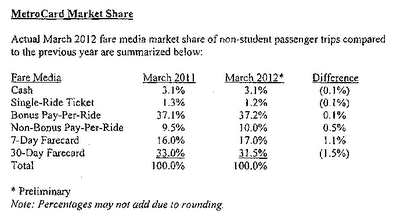 That's right, almost half the fares are paid with unlimited-ride Metrocards. There's no way to take a dollar off if you're not paying per ride!

Now, it's quite likely that the percentage of people paying with unlimited Metrocards is lower in the outer boroughs than in Manhattan, but I'll bet it's still pretty high. But beyond that, a lot of the people riding buses in "the two-fare zone" are transferring to subways, or even to buses that go to "neighborhoods with subways." A rush hour visit to Kew Gardens, Pelham Bay Park or Flatbush Avenue will give you a sense of how many. Presumably, when they make the transfer, and when they come back, they would spend that dollar anyway. Thus, the discount would only apply to trips that begin and end in neighborhoods without subways. How many is that, really?

For that tiny number of trips, the $2.25 fare is already lowered by the 7% pay-per-ride bonus if the passengers pay with Metrocards and not cash. Many of the people riding those trips would be disabled and senior citizens eligible for the 50% discount on top of that. Whether the fare is $1.10, or $2.05, how often is that really a deterrent? Keep in mind that many of these people already pay a market price of $2 for "dollar vans."

Finally, if we're talking about getting people out of their cars, we know how much people pay to own and insure a car, and drive and park it on the streets of New York City. How many of them are sensitive to a few dollars in bus fare?

As you can see, I've tried mightily to make sense of this. I probably spent a lot more time on it than it deserves. And I'm pretty damn sure that I put more time and thought into it than Sam Schwartz or anyone who's working for him on this plan. A dollar reduction in fares in "neighborhoods without subways" is hard to implement, would accomplish very little, would probably be counterproductive, and would take money from more worthy uses.
Posted by Cap'n Transit at 12:57 AM

Not that it really matters for the purposes of this post, but Apollo Computer was a separate company, a manufacturer of workstations, that was purchased by HP in 1989. They already owned the trademark even though they hadn't used it for a while, so it was an easy name to choose.

I found this post to be really perplexing. Two quick comments.

First, I think you're making some unrealistic assumptions about transit funding. In general, only 20%-30% of operating expenses are covered by farebox revenues. Capital or maintenance costs usually come from gov't subsidies. So whether the buses charge $2.50 or $1.25 or $.75, will have ZERO impact on bulb outs or service cuts. These are questions largely left up to gov't officials, not the transit operator.

At the base of it, you seem to be questioning the inherent value of decreasing transit fares. Yes, people are price sensitive. Yes, demand will increase if price decreases. This is Econ 101. Any economist will tell you that price elasticity will influence demand. A lower price WILL increase ridership. That's undeniable. I find it really bizarre that you could be against that. Isn't part of supporting transit ensuring that prices stay low??

@Mark Simpson: The price elasticity of transit demand is generally quite low, since most transit trips are not really discretionary and transit is already vastly cheaper than its competition. And as Cap'n noted, this particular proposal would only result in lower fares for a tiny proportion of trips.

Cap'n has discussed farebox operating ratios here before. A bus like the Q10 has a farebox recovery ratio of about 66%, so a plan that did decrease fares for a significant number of riders would have a non-negligible impact on funding. (Halving revenue on the Q5 would double net operating cost.)

Routes with farebox recovery as low as the 20-30% you suggest generally did not survive the most recent service cuts - which were in fact determined largely on the basis of farebox ratios, not politics. It's true that capital costs like bus bulbs are generally a separate account, but given that the MTA is often under pressure from politicians and the TWU to raid its capital budget for operating funds, I think it's a bit disingenuous to suggest there is "ZERO" connection there either.

@Cap'n, everything I've read about this Schwartz Proposal makes it sound like some sort of bad joke that is sure to be politically DOA. Do we really need to be worried about it seriously, or are you just harping on it to illustrate broader points?

Err, I meant the Q5. The Q10's operating ratio is actually 96% (though I'm not sure whether it counts as "far from the subway").

The real reason for Gridlock's inclusion of reduced bus fares is simple: politics. The last plan was partially crushed by the collective uproar from the outer boroughs (and suburbs). If you are correct and the majority of these "discounted" rides will be with unlimited cards, and thus, not discounted at all, then this "concession" is a small price to pay for the overall goal of creating political will behind his plan.

Mark, you wouldn't be related to the Simpson of Simpson and Curtin, by any chance? In this case, we need to move into Econ 102 at least.

Three (Alexander), this proposal is being taken very seriously by Streetsblog and Brian Lehrer, at least. Some people seem to be suspending their critical faculties when it comes to getting congestion pricing passed.

Michael, I understand that that's why Schwartz is doing this, but it's not going to create enough political will, and he's giving away too much.

Mark, Economics 101 usually provides a chart which shows what happens when you price a product lower than the cost to produce it. Low fares make transit agencies reluctant to add new service. This is why I advocate a much higher fare. Remember that in the beginning, bus lines PAID the city to operate.

The problem with congestion pricing is that it is going to be used as a way for the government to avoid funding transit. If both cars and transit had to pay their way, I would be ok with that.

If you have spare money, it would be better to add service than reduce fares. Changing a route from ever 15 minutes to every 7.5 minutes would encourage fare more riders.

Come to think about it, how would such a surcharge even work? I mean, most buses pass through an area where the subway is hard to reach at one point or another, even in Manhattan. And for that matter, some areas have subways, but they don't serve the needs of a portion of the commuters (Harlem has a bunch of subway lines, but if you want to go crosstown, you have to take a bus).

This plan has more holes than Swiss cheese.