Could the MTA ever run the Koreana van?

Last night I wrote about a new van service running from Flushing, Queens to Fort Lee and Palisades Park, New Jersey. The service is privately owned and operated, and charges ten dollars each way (with a free trip every ten rides). Now let me ask: Can you imagine the Metropolitan Transit Authority starting such a service? 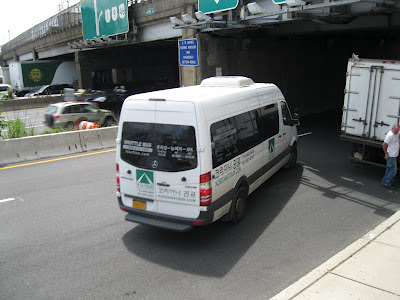 The wonkiest among you may reply, "No, because crossing the Hudson is the Port Authority's job." Fair enough; can you imagine the Port Authority starting such a service? As far as I know, the Port Authority has never initiated a new transit service at all. The only one they run is the PATH trains, which they took over when they bought the bankrupt Hudson and Manhattan Railroad in 1962. They rely on New Jersey Transit and private companies to provide transit across the Hudson.

Starting a service like this - a service that crosses a state line and two rivers, and charges ten dollars! - is not something that the Port Authority, or the MTA, or any of our transit bureaucracies, would ever do under the current circumstances. Only a few people at either agency has enough power, and for them the risks are too great, and the rewards too small.

Back in January, MTA Chief of Operations Planning Peter Cafiero announced that the authority would be shutting down the number 7 line for eleven weekends from late January through mid-April, and again for five weekends in the fall. Regular reader Angus Grieve-Smith picked up on an idea that I floated a couple of years ago to run shuttle buses through the Midtown Tunnel, and convinced City Council member Jimmy Van Bramer to back it with city money.

The MTA refused, according to the Post: "MTA chiefs balked at his idea, Van Bramer said, because they worried that if they offered it to 7 riders, they’d have to do the same for other communities that deal with serial service outages, like those along the L line." One of their complaints is that even if the tunnel bus worked, it would be a lot more expensive than a shuttle to Queensboro Plaza. I'm not convinced of this in the first place; note that they studied shuttle routes to Grand Central, even though I argued for using the 34th Street busway instead.

In addition to the "then we'd have to give ice cream to everyone" argument, transit agencies are often also reluctant to increase service if they have any fear that they might have to cut it back again later. In part this is because service cuts require so many hearings and announcements, and offer opportunities for politicians to rail against "the MTA." Why would any self-respecting bureaucrat set themselves up for more public criticism than the minimum they can get away with? It's similar to the argument that severance pay and other measures that make it difficult to fire people also make employers reluctant to hire.

Can anyone remember the last time the MTA started a new bus route? It has acquired routes that were started by old streetcar and jitney companies. It has regularized and streamlined the system, combining some routes, splitting others and renaming some. But has it ever said, "You know, there are people here who want to go there. They're willing to pay for that. Let's make that happen!

The only possibility I can think of are the express bus routes that were started in the 1970s. The Select Bus routes are upgrades of existing routes, and they're being pushed by the Department of Transportation. There were a few other routes proposed as part of the congestion pricing debate (including a local route from down Northern Boulevard and 61st Street from Flushing to Woodside), but they never saw the light of day.

The MTA did not realize that there were lots of people in Sunset Park, Flushing and Elmhurst who wanted a quick, one-seat ride to Chinatown. If they ever did figure that out, they did not try to provide that service. If private operators had not stepped in to provide it, would we know that the market exists? What other potential routes are we missing out on?
Posted by Cap'n Transit at 12:51 AM

One thing about the T, they will always shuttle bus out-of-service lines from station-to-station. To a fault, even. They usually don't bother collecting fares either. When the Red Line past Harvard had to undergo urgent maintenance on weekends for 3 months, they sent a horde of buses to carry riders to and from Porter, Davis and Alewife.

They will also pull buses and drivers off of high-frequency routes and send them to temporary shuttle service. It doesn't always work out so great though, since there isn't always a good paralleling road path. And I've heard stories about drivers getting lost because they don't know which way to go. The Blue line occasionally has wire problems and the result is a mess at Maverick Square as hundreds of people spill outside to find shuttles, many of them trying to get to the airport.

I'm sorry, Matthew, that wasn't clear: the MTA did run shuttle buses to nearby stations in Queens, as they always do, but those shuttles are slow and crowded. They refused to run any through the tunnel to Manhattan.

"Can anyone remember the last time the MTA started a new bus route?" The S89 in 2007? Which also crosses into NJ. Even within the core frequent network, the M60 was only created in 1992 (you could perhaps have followed its route before by making three or four transfers, but its creation basically served a whole new market).

Small extensions of routes to serve new and changing destinations are more common; http://en.wikipedia.org/wiki/List_of_bus_routes_in_Queens has many examples, including in the past 10 years. Another good example is the extension of the Q5 and Q85 to Green Acres Mall around 1990, which again shows a willingness to work past jurisdictional issues to get people where they want to go (if only the MTA thought this way more often).

None of these examples are quite like the Koreana Van, which runs very infrequently, mostly uses expressways, and makes a total of three stops, only one of which is in New York City. Such a service can certainly be useful, but is far outside the MTA's core competence of running local urban transit. Indeed, given the way the MTA's current express bus routes hemorrhage money, I'm on the whole glad that I can't imagine them starting such a service any time soon.

It also seems that a larger proportion of the benefits of such a service are born by its users (compared to frequent local service, which can have a larger impact on commercial activity and land values) so it makes more sense for it to be run by a private operator rather than a subsidised government authority.

Only NJT could pull this off because their thought process is different. NJT is a regional bus company. The MTA is not.

@threestationsquare: If you want to think about it, the S89 was intended to serve a market already served by Joel's #144 (which is why he hates that route with a passion). It's just that it ran more frequently but forced riders to transfer.

In any case, the S55 was extended up the South Shore in 2007, serving a new market (albeit very small because South Shore routes tend to get low ridership), and the S93 was created so that riders wouldn't have to make a transfer between the slow S53 and the S62 to reach CSI. There's also the B83 to Gateway Mall.

While I generally think it's best for the MTA to stick with what it does best (operating high quality urban transit service), there are a few reasons why transit agencies are reluctant to try new things.

It's important to remember that as a transit planner you're potentially affecting with people's lives. Some good, some bad. You don't usually hear from the happy riders but the unhappy ones will complain bitterly through political channels and at best make your life difficult.

Transit agencies have very high operating costs and almost every service operates at a loss. The MTA does really well at carrying large numbers of people on busy urban bus routes, but running low-volume routes or express segments becomes very expensive. Private operators can often provide more cost-effective service for long-distance routes because they have different cost structures, can easily make changes, may use smaller vehicles, and most importantly, can set fares at market rates. The MTA takes a big loss on express bus routes that charge $5.50 but private carriers like Martz, Lakeland and Transbridge charge more than twice that amount for trips of a similar distance. (They don't make a huge profit but it's enough to be worth it.)

Transit agencies have incredibly high startup costs and risk. Every experiment has to be thoroughly vetted, and if it doesn't work out, now at least some people have started to depend on it and it's very difficult to change it. That's a big problem if it's expensive to operate, like an express route. If a private operator finds things to be different than expected, they can quickly modify the route, adjust the schedule or raise/lower the fare without public hearings or political interference.

Lastly, keep in mind that government agencies are prohibited from competing with a private operation. Anything that has the potential to divert riders from privately operated services runs a big risk of a lawsuit.