100 Years of the Tappan Zee Bridge: A Look Back

This December 15 will be the hundredth anniversary of the completion of the first Tappan Zee Bridge in 1955. In honor of that occasion, we've collected some highlights of the history of the original bridge and its current replacement. 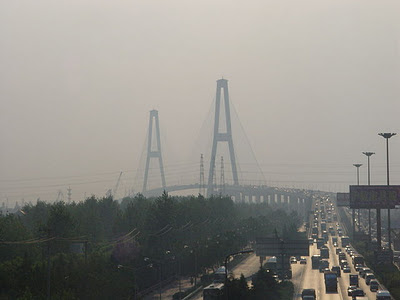 1970: The Thruway Authority repays the last of its $80 million debt to New York State.

1993: A movable barrier system allows four lanes of traffic to flow in the peak direction.

1999: The I-287 Task Force is formed to explore options to rehabilitate or replace the bridge.

2011: President Barack Obama announces that the replacement of the bridge will be expedited.

2017: Governor Richard Brodsky opens the new north span of the bridge to traffic.

2027: Governor Eric Ulrich opens the new south span of the bridge to traffic.

2032: The Historic Tarrytown Village is moved to a parking pedestal in Elmsford to make room for the Tarrytown Water Filtration Plant and the Residences at Sleepye Hollowe.

2048: Bowing to political pressure, TZSG President Theodore Gillibrand converts the "little used bicycle/pedestrian path" to a reversible lane. The bridge has to have seven lanes in the peak direction, he argues, because the Thruway is that wide.

2049: The Andrew Cuomo Tappan Zee Task Force is formed to explore options to rehabilitate or replace the bridge.

2054: The Historic Village of Nyack is moved to a parking pedestal in Nanuet to make room for the Nyack Biomass Plant and the Residences at Nyacke.
Posted by Cap'n Transit at 1:20 AM

Cara Cuomo-Espada? Man, what a classic!