Last week, Comptroller DiNapoli released an audit of Rockland County's finances. Much of the discussion of the audit has focused on the $52 million deficit in something called the "unappropriated fund balance": whose fault it is, and why County officials relied so heavily on the sale of a nursing home that fell through. But the real question is why the deficit appeared in the first place, and whether anything can be done to avoid them in the future. The audit report says,


3. The Legislature and County officials should realistically budget for sales and mortgage tax revenues and/or reduce general fund expenditures to levels that can be financed by recurring revenue sources.

When talk turns to local government financing, I think of the Strong Towns approach. Chuck Marohn and his friends Ben Oleson and Jon Commers have found that sprawl development is really bad for the budgets of local governments. They list the five key features of a Strong Town:

1. Must be near-term financially solvent.
2. Must have the tax base and resources to cover long-term financial commitments.
3. Must have sufficient age diversity so that population will be added at a rate greater than population is being lost.
4. Must have sufficient economic diversity and vibrancy so that businesses are being added at a rate greater than or equal to the rate they are being lost.
5. Must have the courage and leadership to plan for long-term viability.

I haven't delved into the finances of every town in Rockland County, but it sounds like the county at least has made financial commitments that they don't have the tax base and resources to cover. Chuck, Ben and Jon also list ten Placemaking Principles - there's some overlap with the key features listed above, but there are some new strategies for achieving them. Here are three that are particularly relevant for Rockland County:
If you've ever been on Route 202 in Suffern, Route 9W in Piermont, or pretty much anywhere along Route 59, you've been on what Chuck calls a "stroad": 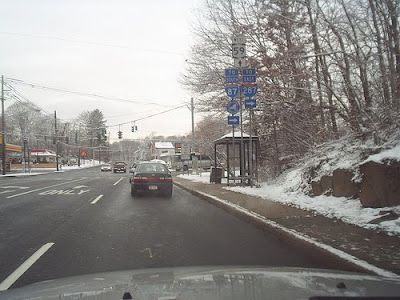 If you want to start to see the world with Strong Towns eyes and truly understand why our development approach is bankrupting us, just watch your speedometer. Anytime you are traveling between 30 and 50 miles per hour, you are basically in an area that is too slow to be efficient yet too fast to provide a framework for capturing a productive rate of return.

Once you've done that, ask yourself: Which would reduce costs associated with land use, transportation and development: spending five billion dollars on an eight-lane highway bridge that will be expanded to ten, or spending that money rebuilding the rail connections to Newark, Jersey City and New York City?

Finally, when you're done with that, ask yourself: with a brand new bridge encouraging lots of driving, how much would a sprawl-oriented bus project really do to move Rockland away from its unsustainable sprawl and towards a Strong Towns way of life?

To solve the budget problems in Rockland County as, in the rest of the state and the country, as Chuck likes to say: we need to build places of value. We need to start building Strong Towns.
Posted by Cap'n Transit at 11:42 PM

I get the strong towns idea, but if you go back to Dolores Hayden's Building Suburbia, she makes a pretty good argument that developers have always called the tune when it comes to town governance. From where are these municipal leaders going to get the backbone necessary to ask developers to pay the full cost of their projects?

No offense, Jonathan, but I think you actually don't get the Strong Towns idea. If it involves getting developers to pay the full cost of their projects, that's a small part of it.