Tappan Zee carnage: don't pee on my back and tell me it's raining!

I want to highlight one particular piece of Tappan Zee bullshit tonight: the traffic safety issue. Our Governor says, "with seven narrow lanes and no safety shoulders, the Tappan Zee has an accident rate double the rest of the New York Thruway system." And to be specific, the State Department of Transportation says, "In 2007, the accident rate on the New York State Thruway was 1.1161 per million vehicle miles, lower than the New York State accident rate of approximately 2.36. The accident rate on the Tappan Zee was more than twice the Thruway rate, at 2.4250 per million vehicle miles." But how many crashes are we actually talking about? "In a 3-year period from July 2004 to June 2007 there were 1,645 accidents that occurred between Interchange 9 in Tarrytown and Interchange 10 in Nyack, which includes the Tappan Zee Bridge, the approaches to the bridge, and the toll plaza." So just under 550 crashes a year.

I've touched on it before, but I think it's important to get us absolutely crystal clear on this. The traffic safety issue is bogus. The Governor could bring the crash rate down tomorrow with one phone call. It would cost a few thousand dollars at most. He doesn't need to spend five billion dollars on a new bridge to do it.

Seven narrow lanes and no safety shoulders? Gee, what can you do about that? Well, here's an idea, Governor: 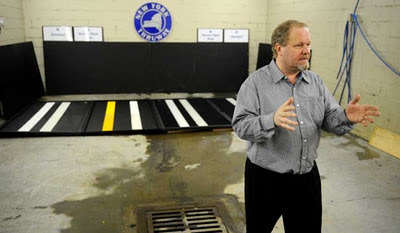 Well, of course there's a lot more to say. You could make the bridge significantly safer by simply repainting the lanes, but that would mean that not as many drivers could get across, which would bring down toll revenues. You could raise the tolls to the market-clearing price, but then you'd have a bunch of angry people who could no longer afford to drive to work in Westchester.

In fact, the bridge used to have six wider lanes, but in 1990 they were repainted to make room for a reversible center lane, and an expensive barrier-transfer system was installed, allowing 30,000 more cars to cross it every day. That's right, the State actually decided in one fell swoop to increase the annual costs of the bridge and make it less safer. Pee on my back and tell me it's raining!

The leadership of the state has decided that they don't care as much about safety (or cost) as about moving cars and trucks across the bridge. They have never been motivated by safety to do anything significant on the Tappan Zee Bridge. Safety is not their motivation now, and it will not motivate them once the bridge is replaced. As in 1990, the safety features that are one of the major selling points for the new bridge will be compromised one by one to make room for more cars.
Posted by Cap'n Transit at 11:30 PM