Why not a longer "Tappan Zee High Line"?

Everyone knows I've got serious misgivings about the rails-to-trails movement, especially when people pull the rails out of perfectly functional, useful railroad infrastructure. I feel a lot better about roads-to-trails, and there are several good ones. The best is the section of the Long Island Motor Parkway that's been preserved here in Queens. There are other trails that use land taken for roads that were never built. I've walked on the Nassau-Suffolk Greenbelt, which follows an unbuilt section of the Bethpage Parkway. The Briarcliff-Peekskill Trailway in Westchester also uses an old parkway right-of-way.

Back in October when the Governor began his push for the Bridge Reconstruction merit badge, Paul Feiner, Supervisor of the Town of Greenburgh (which includes Tarrytown and Elmsford) suggested leaving the existing bridge standing for use by cyclists and pedestrians. This had been considered in earlier bridge replacement plans, but ultimately rejected in favor of a bike/pedestrian path on one of the two replacement spans. But if, as I've argued, the Tappan Zee Bridge should not be replaced, then Feiner's plan has a shot. 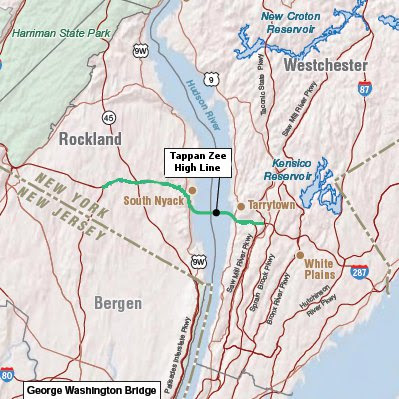 Instead of tearing the existing bridge down, we could keep two lanes for buses and use the rest of the width for a mixed-use path.

My question is, why stop there? The bridge itself is three miles long, but if we're not replacing it then we don't need the loud, polluting highway approaches. They'd just dump cars onto Routes 9 and 9W anyway.

Where the Thruway (Interstate 87) and the Cross-Westchester Expressway (I-287) split in Elmsford is right over the missing link between the two rail-trails that run in the right-of-way of the Old Putnam Line. If we reconfigured the highways so that northbound Thruway traffic turns east on the Cross-Westchester, then we can have the Tappan Zee High Line connect to the South County Trailway (PDF) there. It will also pass right under the Old Croton Aqueduct Trail.

On the Rockland County side, if we terminate the Thruway at the Palisades Parkway, we can extend the Tappan Zee High Line west for a total length of nine miles. It can connect to the Esposito Memorial Trail and the Long Path in Nyack. If we stop the Thruway at the Garden State Parkway, that makes twelve miles. Think of the recreational possibilities!

Of course, those connections assume that we don't reactivate the old Erie Main Line and the Putnam Line, but it might be worth it even so.

To be perfectly honest, with the length and the grades on the current bridge, I'm not sure it would be a pleasant trip - unless maybe we could have a concession for a bus stop, cafe and refreshment stand at the highest point. But it makes a lot more sense than some of the other recent proposals "high lines."
Posted by Cap'n Transit at 1:46 AM

especially when people pull the rails out of perfectly functional, useful railroad infrastructure

Name one active railroad that was converted to a trail. If the ties have been moldering along the row for the past decade or so, since they came along and salvaged the rails, it isn't particularly useful or functional. It usually gets to that state because even when it was being maintained it wasn't particularly useful. Which is why it ended being abandoned.

The second track of the Providence-Woonsocket line would've made regional rail reactivation much simpler.

It was never abandoned. It's not a trail. Nor did they remove freight from the ROW.
The Conrail abandoned freight service over the former CNJ Newark Bay Bridge in 1976 and switched it over to the Lehigh Valley bridge. The passenger service was abandoned in 1978 and the bridge itself was torn down in 1980. There was and is some local freight on the line. Since it was the four track mainline to Elizabeth, Philadelphia and Washington DC they had plenty of room to put in two light rail tracks and one for the freight that moves up and down it.

What about a rail freight line?