The north structure - during construction

I checked in on the "new" Tappan Zee Bridge website, and I found something interesting. The "boards" from the two scoping sessions held in October are now online as a PDF. Board 16 has cross-sections that answer my question as to how the lanes would be divided under these plans. Here's the north span: 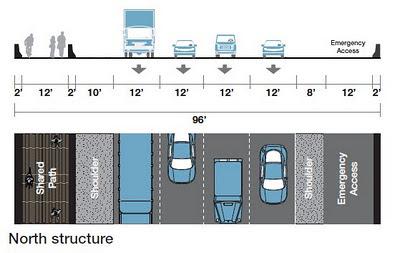 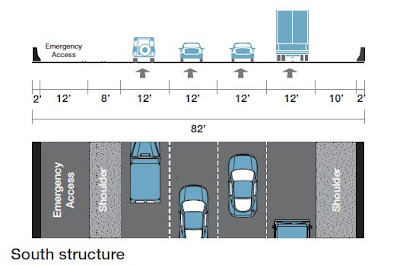 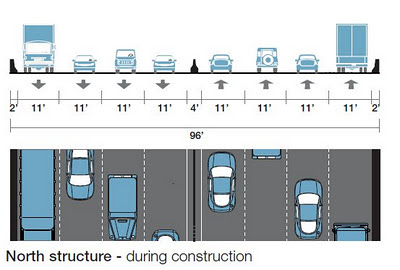 Funny, it looks just like our existing 82-foot bridge, with an extra lane added!

This seems like a straightforward way to replace a bridge, and maybe that's all it is, but something smells. Does it smell to you? I'm not really sure what Cuomo and the cranky old highway engineers at the State DOT are up to, but allow me to indulge in some wild speculation:

1. Are they actually planning to build the second span any time soon? It could be the ultimate cheapskate tactic: build one span that will add a lane and eliminate the expensive barrier transfer, and never deliver on the second span that will yield the promised shoulders, shared path and "emergency access." By that time, Cuomo will be President and the new Governor can announce that, sorry, there's no money for the south structure!

2. If they build both structures, how long does anyone think the extra lane will be reserved for "emergency access"? My guess is that as soon as the new bridge is open, at the first traffic jam some enterprising politician will start the clamor to have the "emergency access" lane opened to general traffic. That assumes that people will still be able to afford to commute by car across the bridge in the same numbers they've been doing it. That in turn assumes that a wave of outrage will have already persuaded Cuomo to call off the planned doubling of tolls and pay for the south span with income tax money (twist his arm!), and that gas prices won't have risen too high.

3. How much longer after that do you think the shoulders will still be there?
Posted by Cap'n Transit at 12:12 AM

A better outcome would be to convert the seemingly needless emergency lanes into exclusive busways. So obvious, in fact, that I'm curious why that isn't already part of the plan.

Seconded! Also, smoothly rolling buses are a lot easier to clear out than jammed up cars when you need to get an emergency vehicle out, so you really wouldn't lose anything there. It would be a cheap way to add it to the bridge on the cheap and try to quell the calls for transit. Granted, a real BRT lane would be ideal, but beggars can't be choosers.

Great post. I have to wonder why, if shoulders are supposedly so important, such that an entire second span will be constructed just to provide them, the interim lane configuration for the north structure does not contain them? Doesn't this imply that the designers believe that the additional traffic capacity (of eight lanes vs. six) overrides the need for shoulders and emergency access lanes, which could be placed along either side of the span, still leaving six lanes for traffic?

Second, how often do emergency vehicles actually traverse the bridge anyways? Nyack and Tarrytown each have their own fire departments and hospitals after all. Maybe it does happen with some frequency, I've just never seen anything written about it.

It seems fairly common these days to delay the "alternative transportation" component of any big project after the alt-transport people sign off on the proposal.

This is anyway bizarre - Birmingham (UK) - has a much longer stretch of motorway (freeway, M42) with a hard shoulder that can optionally be used as a traffic lane. It's monitored by cameras, and gantrys tell drivers whether or not the lane is in use. This also allows a variable speed limit to be set and enforced. Smoothing the flow of traffic improves safety and capacity.

If I were chosing to build the M42 from new, I'd probably spend the money on heavy rail instead. But since we already have the M42, it makes sense to leverage it as much as possible, either through this sort of approach or through adding bus and HOV lanes. In this specific case, the M42 is a choke point for the whole motorway network, but unfortunately not one that would allows transit an advantage by giving it preferential treatment - on these distances, cars are competing with trains, not buses.

Jon, you don't want to see the entire discussion of rail on the bridge resurfacing.