Greenfield toll, HOV and bus lanes are no improvement

The news is that the toll roads in Orange County, California are not bringing in as much money as planned. Similarly with Maryland's Intercounty Connector. In Virginia, high occupancy/toll lanes won't bring any revenue for the state government, even though it spent half a billion dollars on them. 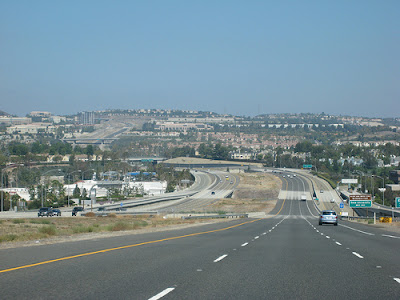 What's really annoying is that for some people, building toll or high-occupancy vehicle lanes is automatically assumed to be a greenfield operation, the same way Kate Slevin insisted that "we can't have BRT without" a wider Tappan Zee Bridge.

Some of this is related to the idea that a toll is only used to finance the cost of road construction - and not maintenance or reconstruction, somehow. That idea was put to rest in 1937 when Bob Moses issued new bonds for the already-built Triborough Bridge. Just as you can always remove or reduce tolls and pay for a road with tax money, you can always collect or raise tolls and use them to pay for other things.

You can always convert an existing lane to toll, HOV or bus-only. It's easier when you have a nice wide, uncongested highway so that you have room to build nice landscaped barriers around the special lanes, but there's usually room for a jersey barrier. And of course you can always make the whole highway tolled, HOV or bus-only.

The main problem is that if you only implement tolls or vehicle restrictions on new greenfield lanes or highways, those highways will be empty a lot of the time. In the past they've tended to fill up eventually, but with current driving trends this will happen more and more slowly. One day someone will look at a ten-year-old tollway and realize that the promised cars will simply never appear. How many of those empty highways will we have built by then?

It's time to stop thinking that all HOV, bus or toll lanes have to be added. That kind of thinking doesn't solve any problems, and only leads to empty roads and empty treasuries.

In Orange County, there's the additional problem that a bunch of land around the toll roads was converted to conservation land at about the same time they were built. Regardless of what you think about different types of transpo, it's foolish to build something and then preclude development that might justify it. Like if the entire Bronx had been declared a nature reserve when the NYC subway was built.

They also over built those roads at 6-8 lanes, when they should have just done 4 lanes and waited to see if traffic would justify more.

Nevertheless, toll roads are an interesting study in how people really value their time. If the toll lanes are empty, that suggests people don't value their time as much as planners assume, so those assumptions need to change. More realistic assumptions will result in fewer of these roads making economic sense on paper.

Curious as to what you think of the SF Bay Area's express lanes (HOV/toll lanes)? The 237-880 express lanes and 680 express lanes are generally regarded as successes among most commuters, and have certainly enabled select drivers to shorten commutes with an appropriate toll payment via Fastrak

great Post..I just go through the article seems to be informative. Thank you.

Bob Moses, terrible person but clever legal mind, exploited the fact that the legislature could not revoke any agreements written into those bonds, as they were contracts protected by the Constitution.

His powers were tied up in those bonds issued by the Triborough Bridge Authority. There never was any plan in his mind to retire them, because they ensured his total domination of NY in a way that no elected official could ever touch.