A bunch of people liked my post last week about the 85th Percentile Rule, in which I reformulated the rule to incorporate pedestrian and cyclist safety:

1. Decide on a speed limit based on the pedestrian, cyclist and built environment you want to see along this road. That's what you put on your signs.

2. Design the road so that 85% of drivers will feel comfortable traveling under that speed.

This is a problem because the level of congestion can change for all kinds of reasons. A new destination may come into existence: a new housing development, a new workplace, a new shopping or entertainment area. A new road or parking lot may be built, making a connecting road more attractive. A parallel road or transit line may be closed or have its capacity reduced. 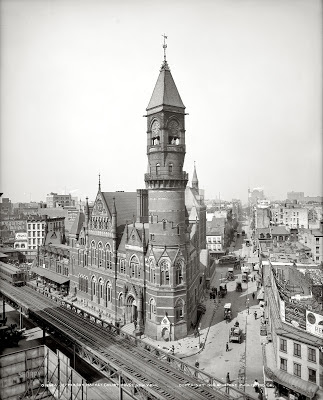 When the demand for the road increases but the capacity stays the same, so does congestion. Governments have a number of ways of increasing the capacity of the road to keep congestion down and keep traffic flowing, without having to completely redesign and rebuild the street. The top two strategies are removing parking and changing the direction of traffic.

The picture above is West Tenth Street in Greenwich Village. Note that there's two-way traffic, but hardly any parking. Here's the same corner from earlier this year: 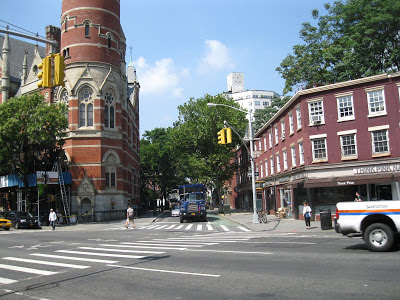 The relatively narrow horsecarts have been replaced with larger cars and trucks. There are more of them, and they're moving faster. Sometimes people want to park them, especially overnight. All of that led to greater demand, so the city converted West Tenth Street into a one-way street. It's not clear whether there was ever parking on this block, but there doesn't seem to be any now, at least at the time of day that I took the picture. The left side of the street has been converted into an exclusive bike lane.

What is bad for pedestrian and cyclist safety is when demand for the road goes down: a destination may disappear, a road or parking lot may be closed, a parallel road or transit line may open. But the government so rarely uses these tools in the other direction. There are legitimate fears of motorist confusion causing crashes, but I believe it's been shown that if you can manage things well, people adjust.

Some in government may see the added speed as a bonus for drivers. That may be, but if the speed goes above safe levels, it's not much of a bonus for everyone.
The government shouldn't simply take away parking and make streets one way. People should monitor speeds and make sure that they don't exceed the chosen speed limit by too much. If the 85th percentile speed is too much higher than the chosen speed, then the government should look to make a street two-way or add parking until the drivers slow down.

Congestion also varies with the time of day, but that's a different post.
Posted by Cap'n Transit at 12:37 AM

The problem is with step 1. We know what speeds maim and kill pedestrians and bicyclists, and so car speeds should be under 20mph. But that's illegal (except in NYC, where I don't know how they got to do this). So we're left with reducing to 25mph if we're lucky.

I understand the idea behind changing the 85% rule in a way that incorporates walk/bike safety, but it still seems....off.

That is, instead of adding to the rule, just change it around a bit -- so 2. would be:

"Design the road so that 100% of walkers and bikers will feel comfortable traveling the road."

1. is no longer necessary.

And the fee-fees of drivers are, at best, a secondary concern.