Tweaking congestion by time of day

Last week I observed that we have a degree of control over the speed of cars and the level of congestion on streets. We can design streets to encourage or discourage speeding. In between, we can adjust the capacity of the street by making it one-way or two-way, and adding or removing parking. There are a host of other traffic speeding/calming strategies like signal timing, lane width changes and sidewalk extensions. But I closed by observing that congestion varies with time of day, and even with time of year (Gridlock Alert Day?).

A street that has stop-and-go traffic during the rush hour may have smooth-flowing cars in the middle of the day, and wide open spaces at 1:00 AM. This daily variation can cause huge problems. Many years ago I had the frustrating experience of renting a moving van on Tenth Avenue at 3:00 PM, and getting to Third Avenue around 3:30. Much worse, of course, is the carnage caused by cars speeding through deserted streets late at night and on weekends. 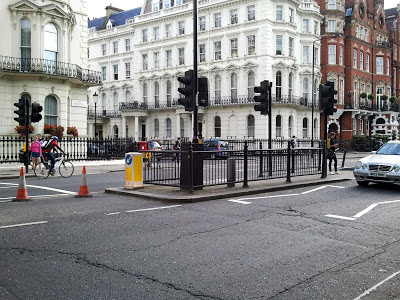 Traffic engineers know all about the daily variation, of course. Their solution is simply to design a road big enough to keep cars flowing during the peak demand, and if people can go even faster on the off-peak they consider that a bonus. Of course, those of us who have to cross the street with those fast cars don't consider it a bonus.

Traffic calming advocates might say that the observed traffic speed should never rise above 20 MPH between 6AM and midnight. On high-demand streets this will lead to gridlock during rush hours, and probably slow traffic during middays and "shoulder" times. If I had to choose, I would choose slower traffic over death, but some of the most vocal, powerful people in the city would rather go fast. Fortunately, there are other ways.

The way that's currently employed by the New York City Department of Transportation is rush-hour parking restrictions on avenues and boulevards across the city. This is a relatively blunt instrument and the city wields it clumsily, with long periods of No Standing on places like Queens Boulevard and Flatbush Avenue. These are much longer than the actual rush hours, leading to speeding and dangerous conditions.

This is where congestion pricing comes in. By congestion pricing I don't just mean a cordon toll to keep traffic low. I mean a charge that varies by time of day: higher when there's more demand, lower when demand drops. The idea is to keep cars moving at roughly the same speed all day. Because the charge can be set by computer, there is much more flexibility than with rush-hour parking restrictions.

What I found on my visit to London was that the congestion charge worked well to keep cars moving all day. The problem was that they were moving too fast. That's a problem that congestion pricing advocates in other cities would do well to keep in mind.

Some day I hope we have congestion pricing here in New York City to flatten out that daily variation in driving. But I hope that we take advantage of that flattening to restore two-way traffic flow (yes, even on Manhattan avenues) and on-street parking, to keep speeds down below 20 MPH. Eventually we can widen sidewalks and add more bike lanes as necessary to accommodate cyclists and pedestrians, and tweak the parking, lane configuration and congestion charge to keep cars moving, but at relatively safe speeds.
Posted by Cap'n Transit at 10:51 PM

Another way to make it work is with parking changes, and possibly even closing off lanes. Retractable bollards anyone?