The Pulaski Skyway, a different "freeway without a future"?

Earlier this year the Congress for the New Urbanism released a new version of its "Freeways without futures" list. I wholeheartedly agree that all twelve of the highways in question are disgusting blights and should be removed. I've seen the Claiborne Expressway, the Sheridan and the Alaskan Way up close, and I have a special loathing for I-81 in Syracuse and Route 34 in New Haven. But there are a few roads that I think deserve to be on the list but aren't. 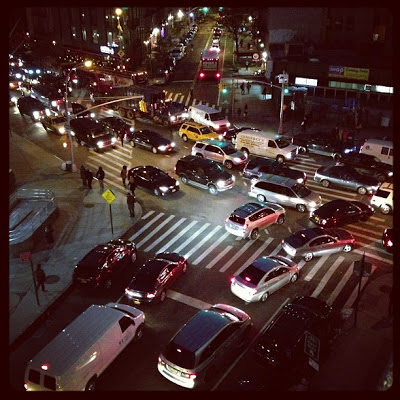 Typical evening congestion, seven blocks north of the Holland Tunnel. Photo: Brooklyn Spoke / Instagram.
It's a bad thing when a highway cuts neighborhoods in half, like the Cross-Bronx Expressway, or cuts a neighborhood off from access to jobs and services, like the Brooklyn-Queens Expressway in Red Hook, or cuts the waterfront off from meaningful recreational or commercial use, like the FDR Drive. Converting these highways to boulevards is a good thing, especially when the boulevards are designed to be walkable and livable. There are other criteria missing, though.

Think of a walkable urban area that's already well-served by transit. The streets are congested with cars for too many hours of the day. You don't need that many cars to bring customers to the businesses, and they're ruining the pedestrian experience. So why do you have a highway terminating there? That highway is basically pumping cars into an area that doesn't need them.

These highways may not be visibly blocking a cherished view or oppressing a street, but by aiming a firehose of cars into a compact urban area they are a major factor in the deterioration of walkable urban environments. When possible, they should either be torn down or turned over to transit.

The most obvious case is Congress Parkway in Chicago. It's six lanes of nasty urban traffic fed by an eight-lane highway. It doesn't need to be there, and it makes the South Loop feel oppressive. It should be narrowed and given sidewalks befitting a grand urban boulevard, from the Circle to the Lake. The District of Columbia is full of these; 12th Street NW is probably the worst. University Street in Montreal is not much fun, as I recall.

Here in the New York area, we have four highway tunnels and five highway bridges that empty directly into the streets of Manhattan. You could get rid of any of the highways (495, I-78, the BQE, the Long Island Expressway, the Grand Central Parkway, the Bruckner Expressway and the Major Deegan Expressway) and it would make a huge improvement.

It's hard to choose among these firehoses of cars, but one of the worst is the Holland Tunnel. This is because it combines two four-lane expressways, the Pulaski Skyway and the Newark Bay Extension of the New Jersey Turnpike, into a single stream. It's even more powerful in the other direction due to the Verrazano Toll Pump, sucking cars and trucks from all over Manhattan and Brooklyn through Chinatown, Soho and Greenwich Village. 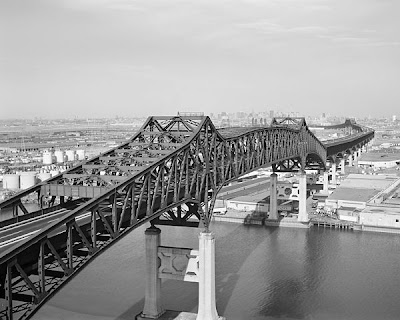 The Pulaski Skyway. Photo: Jack E. Boucher, National Park Service, 1978.
Fortunately, we are coming upon a historic opportunity to turn down this firehose. One of the four-lane expressways that feed into the Holland Tunnel, the Pulaski Skyway, is nearing the end of its life. This expensive steel structure has contributed to the destruction of the sensitive Hackensack Meadowlands since 1932. Naturally, there is a plan to rebuild the structure, and lots of rehabilitation in the meantime. Remember the ARC Tunnel that Chris Christie killed? $1.8 billion of the money is paying for that rehabilitation.

Some people like the way the Skyway looks - from a distance, or from the inside of a moving car, at least. I admit that it has a certain beauty to it. But its function is destructive. If there were some way to turn it into a dedicated busway, that might be nice, but I don't get the impression it would work. If we like the look, let's keep a small piece of it up somewhere for posterity's sake, but don't hold people's lives hostage to aesthetics.

In sum, we're diverting more than a billion dollars from critical transit improvements to maintain a road that blasts 30,000 cars a day (yes, only cars) into one of the densest, most walkable business districts in the country. If this thing were towering over a neighborhood instead of a swamp, it would definitely be on the CNU's list. Is it any less deserving of a teardown because it only saturates the area with cars?
Posted by Cap'n Transit at 1:38 AM

Probably not as grand a plan as you would like, but parts of Congress Pkwy in Chicago were just narrowed from eight lanes to six:
http://gridchicago.com/2012/gimme-shelter-pedestrian-improvements-to-congress-parkway/

Wait, they're spending $1.8 billion on 30,000 cars a day? Did they think ARC Alt Cavern was too cost-effective, or something?

Not to mention that the Pulaski Skyway is actually dangerous - it's foggy, a lot of people speed, and there are these weird center-lane ramps that are tricky to navigate. Plus, the Skyway actually has a lower safety rating than the I-35 Bridge in Minnesota that collapsed.

The quicker they tear down this thing, the better.