So Kaid Benfield's post "Mitigating the environmental paradox of smart growth: softening urban density" got the snazzier title "The Case for Listening to NIMBYs" when it was reposted on the Atlantic Cities. There are several parts of the post that I'm uncomfortable with (e.g. the idea of "nature" and "density" as monolithic things that always have the same effects on people), but I want to highlight the part that the editor (Richard Florida?) highlighted with the new headline.

Benfield quotes two planners, Susan Henderson and Lisa Nisenson, who make some pretty decent recommendations for better community engagement and more sophisticated placemaking. But he frames them in a false dichotomy:

All too often, I think smart growth advocates seek to ignore NIMBY opposition (“we’re right and they’re wrong”) or simply seek to overpower it politically. (Wise developers, to their credit, often negotiate with opponents, frequently succeeding in getting to a “yes” by making concessions that, in the long run, will save them time and money compared to legal battles. Urbanist policy advocates generally lament these concessions.)

Some pro-development commentators are starting to suggest a different strategy: acknowledge that NIMBY fears are frequently well-founded and address them with changes in design, policy and process that respect their concerns.

Yes, it's a bad idea to ignore NIMBY opposition. This is Bob Moses thinking, and it was wrong when he did it. On the other hand, it's also wrong to simply accept NIMBY claims. And it's often a bad idea to horse-trade with NIMBYs; I personally do lament some concessions. O woe of the half-assed height variance! 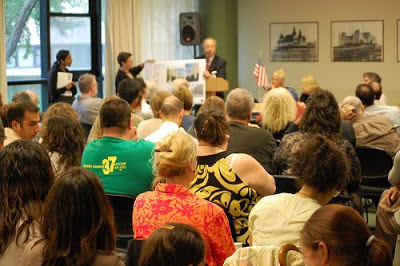 Sheepshead Bay residents listen to a proposal for a group home in their neighborhood, 2008. Photo: Gerritsenbeach.net / Flickr
Here's the problem: NIMBYs lie. They don't all lie, and they don't lie all the time, but enough NIMBYs lie often enough that you can't just take their word for things. They don't just lie to other people, they lie to themselves. Of course, developers lie, too, and planners lie. We're all people.

Seriously, how many NIMBY Predictions of Doom have you heard? Things that made absolutely no sense? But when you looked in the person's eyes as they stood at the mic in the community center, you knew that they really believed that removing two parking spaces would lead to gridlock, chaos and honking twenty-four hours a day. And then the two parking spaces were removed, and there was no increase in gridlock, chaos or honking, but the person has never admitted that they were wrong. Somebody, somewhere should make a catalog of these crazy predictions.

We should listen to NIMBYs, not because that's how you get things done, but because they're people. People deserve respect, and one of the best ways to show respect is by listening. But listening and acknowledgment do not necessarily mean acceptance or agreement. We need to listen skeptically.

Yes, NIMBYs sometimes lie and they're often clueless. Even more often, they're engaging in at least one of these types of irrational behavior:


You may have noticed that people don't like it if you tell them they're being irrational. So what do you do if you think they are? Make them justify, rationally, their concerns and their Predictions of Doom. In other words: listen, but be skeptical. In the long run, listening without being skeptical doesn't do anyone any favors, including the NIMBYs.
Posted by Cap'n Transit at 12:52 AM

In my suburban corner of Westchester, I find the NIMBY's are against greater traffic. Developments near the hghway, with virtually no transit, are worth opposing. The neighbors realize that they are going to see huge numbers of cars driving through their streets, and this will have an effect not unlike that described by Donald Appleyard.