"Choice riders" will put up with all kinds of shit

There's a school of transit planning that divides passengers into "captive riders" and "choice riders." The captive riders are your stereotypical transit riders who are either incapable of driving or unable to afford cars. They're physically disabled, mentally disabled or poor. Often they're some combination of the three, and maybe even immigrants or visible minorities as well. Many people support government-funded transit as a form of charity, but like any form of charity there are people who feel it's a waste. 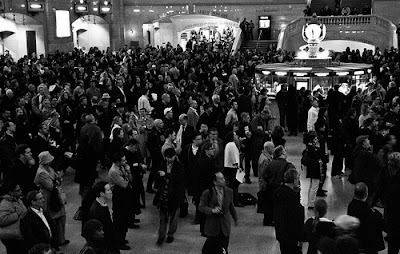 Image: calm a llama down / Flickr
The "choice riders" are people who can drive and can afford cars, but choose to take transit instead. Many transit planners treat them like kings who must be pleased at all costs. They get big, cozy seats on their buses and trains, and parking at the station. Lots of parking. The thinking is that if they are displeased they will just drive instead.

There are a number of problems with this line of thinking. First of all, it glosses over the fact that not all transportation choices are equal. I've identified at least four kinds, which I call the Single Trip, Habits, Investments and Subsidies.

Second, there are also "carfree by choice" households that chose not to make Investments in cars, and thus are "captive riders" from a practical point of view. We are able-bodied, of sound mind, with driver's licenses, and could theoretically afford to buy and maintain a car, but we choose instead to go on European vacations, or pay off our debts, or do any number of other things with the money. We are everywhere, but we tend to be concentrated in walkable cities with good transit. This was the core of my critique of the Eric Morris post I linked to at the top of this post. In fairness to Morris, he was referring to data from a 2001 John Pucher article (PDF). Also in fairness to Morris, it was stupid of him to take an article based on nationwide data and try to apply it to New York City without even considering the possibility that there might be differences in distribution of riders and choices.

The biggest shortcoming of that approach is a limited understanding of the choices people make. We are not just choosing transit or no transit. We have goals, the main one being to get to work. We are choosing between transit and driving. The key is whether transit helps us accomplish their goals better than driving.

It's true that bad service, high fares, low frequency and long travel times will factor into someone's decision to drive instead of taking the train. But only if it makes transit a bigger hassle than driving. The NHTS data that Pucher and Renne cite, and the ACS data that I discussed this past week, show that even middle-class white people will sit on a bus for a long time. Why do they do that? Because driving is worse.

There are many ways that driving to Manhattan, or Stamford or White Plains, in the morning rush hour is a pain in the ass. Traffic on the inbound highways is often backed up for long distances, even on I-684. You can't read or write, or play video games, without putting yourself and everyone around you in more danger than you already do by just being behind the wheel. You can't relax, sleep or drink alcohol, even on the way home. When you get to the city, unless your job provides free parking you have to circle for a space - or more likely, pay for one. Really wealthy suburbanites can afford to rent a parking space, but most commuters have something else they'd rather do with the money.

The conventional wisdom says that "choice riders" won't put up with all these transit hassles. Well guess what? In the greater New York area they put up with them, because the other choice is worse.

I want to make sure you don't just dismiss this as, "This is New York, and other places are different." It's not just New York, it's also Bainbridge Island and Idaho Falls and Vallejo. It's anywhere that driving is difficult and/or expensive.

All these places may have some pre-existing feature that makes driving a pain. In New York it's the rivers and the density. In San Francisco it's the bay, and in Seattle it's the Puget Sound. In Idaho it's the desert and the nukes.

But what about other places that have natural obstacles? DC has the Potomac. Miami has bays. Los Angeles has mountains. Phoenix has the desert and Los Alamos has nukes. Why don't they have transit commuters from their wealthy exurbs?

Idaho is a weird case. Mostly, I think, it has to do with "trip-chaining." In a place that makes it easier to get just about anywhere by car than by transit, commuting by car makes it easier for the commuter to chain trips, so they can drop the kid off at school on the way to work, or pick up the dry cleaning on the way home. I don't think they have a school or a dry cleaner's in the middle of the desert on the way to the labs, so it makes sense to take the bus to the lab and back, and take care of the other errands separately. In Los Alamos, by contrast, most people live in town with the labs, but if they drive from Santa Fe they can stop in Pojoaque or Tesuque on the way.

Parking availability could have something to do with it, as Morris suggests. I wonder if the government limited the amount of parking available at the Idaho National Labs. In the other cases, it would be interesting to see if there's any correlation between the availability of parking in the various central business districts associated with these areas and the transit mode share among upper-class commuters. Certainly New York and San Francisco have limited parking available.

The answer also has something to do with freeway revolts. New York stopped Lomex, Westway and the Mid-Manhattan Expressway, and tore down the West Side Highway. San Francisco tore down the Embarcadero Freeway and part of the Central Freeway. Vashon Islanders stopped a bridge across the Puget Sound. These have made it harder to get to jobs by car - or avoided making it easier. In DC, Miami, Phoenix and LA, the approach seems to have been to build as many highways and parking lots as possible. It's no wonder that people drive.

Returning to the original point: the "choice riders" made their choice based on the relative value of transit as opposed to driving. Transit providers only have to bend over backwards to please the "choice riders" if someone is simultaneously making it easier for them to drive. And even then, at best they will only postpone the inevitable.
Posted by Cap'n Transit at 1:10 AM

Contrary to popular belief, LA hasn't built lots of freeways and parking lots all over the place. In fairly significant areas of the city, generally the more densely populated ones, driving is quite a pain in the ass, what with needing to find parking and sitting in rush hour traffic, which in the absence of freeways is horrendous, and is pretty terrible on the freeways too. Unfortunately, the local buses that still make up the bulk of LA's transit systems are stuck in that same rush hour traffic, and so are comparitively just as much of a pain. In the cases where actual rapid transit has been built, people do take it, pretty much in direct proportion to how much of an advantage over driving it offers. One of the reasons for the initial low ridership on the Gold Line was that the relatively slow service and infrequent headways compared rather unfavorably to the relatively uncogested 110 freeway.