About those long transit commutes...

When people talk about long transit commutes, it's usually with an attitude of pity for the economically disadvantaged transit riders. But when I looked at the long commutes tallied in the 2010 American Community Survey, the second-longest commute, from Poughkeepsie, jumped out at me. You see, I've ridden that train many times. It's not bad. You can sleep on the train: 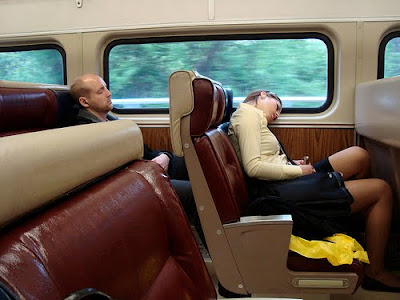 Photo: bitchcakesny / Flickr
These are not the typical "long transit commuters" that are normally invoked in pity-oriented articles; they're well-dressed white professionals. So that got me wondering about the incomes of transit riders, and sure enough the American Community Survey has them. Here are nine metro areas where transit riders have higher incomes than drivers, and Ponce, Puerto Rico makes ten:


So here we see that the median transit commuter in Idaho Falls made $61,214 in 2009, while the median single-occupant driver made only $25,607. Torrington, CT was more dramatic because the incomes were higher: transit commuters made $82,431 while drivers only made $41,540.

To get this list, I eliminated those cities where the ACS had no data for transit rider income or population, and those where the margin of error was more than 25% of the median transit rider's income. I have marked in pale red the metro areas where the difference in median income levels is below the margin of error for the transit riders. In those cases, the survey is not reliable enough to tell us whether there really is a difference in median income between the two groups, so we can treat them as basically equal incomes. Here are the population and commute time figures:


There are no commute time figures for Kingston, but the commutes are roughly the same as Poughkeepsie-Newburgh-Middletown. These two areas, plus Torrington, Trenton, and Bridgeport-Stamford-Norwalk, form the outer ring of suburbs around New York City. In all these places the rich people are the ones who can get jobs in the city, and the lower-income ones have to work nearby. Some of the rich commute to the city by car, but many take comfortable commuter trains or buses. Local transit is pretty crappy, though, so the people who work locally have to drive - and in many cases spend a large chunk of their money on driving expenses. In Trenton and Stamford, there is enough high-paying "job sprawl" to bring the incomes of the drivers up.

When I first looked at this list, I was sure that Idaho Falls was an error. People making $60K a year, spending 69 minutes a day on a bus in Idaho? But it turns out that a major employer in the area is Idaho National Laboratory, which runs a fleet of comfortable motor coaches to bring people to work. Apparently there's not much of anywhere to live around the labs, so all these nuclear physicists live in Idaho Falls. Roughly a third of the 4,000-person staff takes advantage of the opportunity to travel with their colleagues on free buses rather than falling asleep on the desert roads by themselves. This has been working well for sixty years, but recently the lab decided to replace the local stops with park-and-rides, essentially forcing every worker to drive partway. They seem to be spinning it as an overall win-win, but it's forcing the individual workers to spend more time and money on fuel and emissions (and perhaps even buy a car that will get driven a few miles and then sit in a lot all day) to save the lab a little time and money.

Bremerton-Silverdale, as mentioned previously, covers the area across the Puget Sound from Seattle, and the commute basically involves a comfortable hour on the ferry. Vallejo-Fairfield is an exurb of San Francisco, with bus/BART and ferry connections, as well as buses to Sacramento. I haven't been able to figure out what's going on in Ponce, but the average transit trip is only nine minutes longer than the average drive.

I guess we should do what we can to help poor people over rich people, whether or not they take transit, right?

I notice that the Chicago area is the only "big city" metropolitan area on the list (it has approximately 10x the population of the next biggest metropolitan area on your list, Bridgeport-Stamford-Norwalk, although of course as you note the latter is part of the greater NYC commuting area.)

At least from my personal experience, I know a number of reverse commuters via transit to the suburbs, people who could certainly afford a car if they wanted to, but choose not to own/use one because of the hassle involved with keeping it in Chicago, living in the city being important to them. Then again, in the greater scheme of things, young reverse-commuting professionals are only a small stream compared to those who commute inward to the Loop or suburbanites commuting to other suburbs.

It'd seem that Chicago would show up on the list because of the high number of wealthy white-collar workers commuting in on Metra; but Chicago is of course not the only metropolitan area with a robust commuter rail system here. I wonder if it's because all the outlying suburbs are counted as part of the metropolitan area, as opposed to the NYC area, where the commuting area is so large that areas like Trenton or Bridgeport are broken off, whereas places like Kane or DeKalb counties are included in the Chicago-Naperville-Joliet MSA.

Chicago also caught my eye. I think it could just be that a large percentage of the transit use in the region is to downtown (regardless of income) and the jobs downtown are higher paying.

Andrew's explanation for the division of MSAs could make sense for why Chicago was on the list and NYC wasn't. There really aren't many other places with extensive regional commuter rail and a very large percentage of jobs in the CBD(s). Maybe Boston or even DC? How do they stack up?

Can you look at this data with lower margins of error in the 3 year or 5 year ACS? Really interesting.

I guess out in Chicago, the suburban office parks don't pay as much as they do here in NYC.

Nice post. Can you elaborate a bit on the methodology? Did you simply pull these numbers down from the American FactFinder? If so, can you please provide the table ID? Since the 2010 ACS microdata hasn't been released yet, I'm guessing that you used the tabular data, but would really like to confirm that this is the case. Thanks!

Cap'n, can you do the same analysis for workplace geography rather than residential geography? Litchfield County, Ulster County, and other satellites of New York have very few transit commuters, and those are usually people driving to a commuter train to Manhattan, which skews everything.

With workplace geography, for people who work in Stamford and Greenwich, transit riders are richer than drivers: presumably, the former group is dominated by reverse commuters from Manhattan.

I don't know of any other place for which it is true. Even for people who commute to work in Manhattan, drivers are richer - $62k vs. $48k.