The Tappan Zee Bridge is a sprawl-generating machine

Whenever I see a wasteful road project, one of my first responses is to look for ways that the same trip could be made by rail. I tried to do that for the Tappan Zee Bridge. Going from Rockland or Orange to the city? We can dig the Gateway Tunnel. Going from New Jersey to New England? We can have the Cross-Harbor Rail Freight Tunnel, or we can reactivate the Poughkeepsie Bridge. Then I saw this chart, which has stumped me for months:

It illustrates the results of a survey done by the State Department of Transportation in April 2003, to determine the origins and destinations of eastbound auto and bus travelers crossing the Tappan Zee Bridge. In response to a question from Bbnet on a post from January, I dug up the survey summary, which says:


On an average weekday, 80,457 people cross the Tappan Zee Bridge in the eastbound direction. ... The majority of the person trips (65 percent) originate in Rockland and Orange counties, with 42 percent coming from southern Rockland County alone. The remaining person trips either begin in New Jersey (24 percent) or locations external to the study region (11 percent)...

In terms of where trips end, slightly more than half (51 percent) of all the eastbound person trips over the Tappan Zee Bridge terminate in Westchester County. Approximately 28 percent of the trips end in New York City (16 percent in the Bronx, 7 percent in Manhattan, and 5 percent in other areas of the City), which includes those person trips commuting on the Hudson Line from the Tarrytown Station. The remaining person trips terminate in Connecticut (10 percent), Long Island (3 percent), Putnam and Dutchess counties (1 percent), and in locations external to the New York metropolitan area1 (7 percent).

Hm, well it looks like the Gateway Tunnel, the Cross-Harbor Tunnel and the Poughkeepsie Bridge won't be much help to these people. 65% are coming from Rockland and Orange Counties, but if we add up Westchester, Putnam, Dutchess, the Bronx and Connecticut we get at least 78% of commuters who wouldn't be able to take advantage of those options. For those commutes, the only place you can really cross is at the Tappan Zee.

There are several reasons why sprawl is a dirty word among environmentalists, and they're listed at the top of this blog. Car-centered development pollutes the air, causing asthma and global warming. Incessant driving kills people, pets and wildlife. Sprawl wastes a tremendous amount of space, separating people from each other and causing obesity. Driving everywhere uses energy much faster than our planet gets it from the sun. 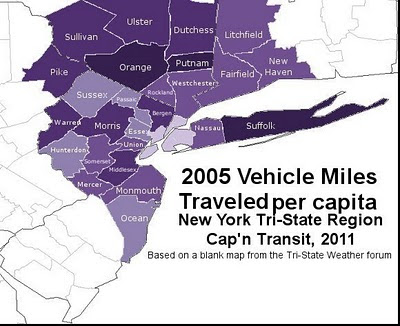 The sprawl in Orange, Rockland and Bergen counties did not just appear. People built it because there were buyers, and those buyers came because they could drive to work. They could only drive to work because of the bridge. It's a sprawl-generating machine.

Rebuild the bridge, on the other hand, and you continue that demand for sprawl. Widen it, or even just "bring it up to modern standards" so that people can drive fast, and you increase the demand.

Why are we doing this again?
Posted by Cap'n Transit at 11:11 PM

First of all, I want to say that I don't live in New York. All I have to see the area is Wikipedia and Google Earth.

I live 60 miles from Denver. If all 2.5 million people living in Denver had only 6 lane Colfax Avenue bridging across the South Platte, we would be pretty pissed to say the least. Granted, the South Platte is a city block wide; not 3 miles wide.

Instead, you want to crash the economy of those counties just because you hate sprawl? Sorry, the damage has been done.

The Thruway has been built, the houses have been built, the office complexes have been built. There are two million people living between Orange, Rockland, and Westchester county. Now I suppose you could live without the Tappan Zee, like New Jersey could live without the Hudson River tunnels. Sure, while you are at it lets not produce anymore electricity, food, clean water, clothing, anything. Hey, it all supports sprawl, so it must be all bad, right?

Hope can be found in repairing the sprawl to be walkable and bikeable.
NY 59, the main street of Rockland County, should be first to be completely torn up and remodeled. The new NY 59 would have generous sidewalks, cycle tracks, 10-11' lanes instead of 12' lanes, median refuge islands for pedestrians, a light rail system down the median, and incentives for the property owners to build closer to the street. Traffic would flow at a more reasonable 25-30mph.

For the bridge itself, it should have 8 lanes, plus a 3 track railway. The 8 lanes would have 4 set aside for HOVs, and 4 for SOVs. The 3 tracks would enable something like the RiverLINE between Camden-Trenton plus a track for freight trains.

Tolling would be done at highway speed like E-470 here or the 407 in Ontario. The road would be priced so traffic is free flowing even during rush hour and lower outside of rush hour. People would be able to *gasp* actually get where they are going in a reasonable amount of time.

Cars are not the devils work; they are just overused.

Zmapper, I think you need to spend a little more time with Google Earth, and with this site. The Tappan Zee Bridge is not the only way for people who live in Rockland to get to jobs.

I don't want to "crash the economy" of these counties. They have done that themselves. I just don't want to spend my tax dollars to revive it - unsustainably.

Cars are a viable form of transportation. I would argue that modal shift should not be imposed because the government has been TERRIBLE at keeping up with mass transit demand. The reality is that most people are forced to drive today.

The key is to charge appropriately for crossing the bridge. That may be a $7 or $8 toll instead of $5. Bridges in this region typically make money.

Widening the bridge is a mode shift, in the wrong direction. And it's also a money shift, from the public to the construction contractors. Get the cost down to sane levels first, and talk about crashing the economy later.

Alon, you know better than that. Sane cost and public works don't seem to work together in the Northeast. Unless anyone can guarantee that funding will be provided for mass transit, I would not recommend constricting supply of existing road space to shift people onto a transit network that isn't tied together or doesn't exist.

I'm sorry, Joel, you're way off here. Nobody forced these people to move to Bergen, Orange or Rockland. Most of them grew up in the city and moved out there. They could have stayed here, or moved somewhere with better transit.

Most of the people who grew up in these counties had an opportunity to move to someplace with better transit after high school, and quite a few did (I did something similar). Nobody forced the others to buy into the car system.