Since the distribution of incomes seems to flatten out across a region - or at least, to reach a maximum of about 1 - it seems that the diversity happens at the county level. Accordingly, I tabulated a list of the counties with the highest ratios of transit incomes to driver incomes:


There are some surprises here. What's going on in Saint Lawrence County, way up by the Canadian border? Is it something like we saw in Idaho Falls? I'm guessing that it's faculty commuting to SUNY Potsdam or Clarkson University. In any case, there are only 92 transit riders in the county, so maybe one of them can email me. 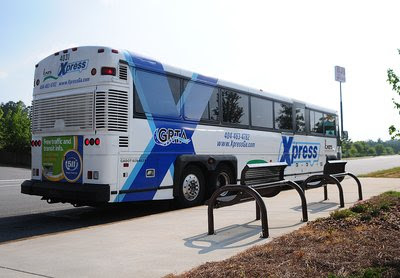 Photo: Todd Hull / Cherokee Tribune
The case of Cherokee County, Georgia, is more straightforward. Just about all 457 of them pay $125 a month to ride an express bus into Atlanta several times a week. A massive HOV/BRT plan was shelved in 2009.

Litchfield County, Connecticut is the same as the Torrington Micropolitan Statistical Area discussed in my earlier post, and Ulster County, NY is the same as the Kingston μSA. The Illinois counties of Kane, DuPage and McHenry are all suburbs of Chicago reachable by Metra. Stafford and Spotsylvania counties in Virginia are southern suburbs of Washington, DC served by Virginia Railway Express, and Bristol County, Massachusetts is a suburb of Boston served by the MBTA commuter rail.

One other thing: of course you don't want your county to have too low an earnings ratio, because that means that all the poor people are being pushed onto transit. On the other hand, you don't want it too high either, because too many poor people driving means your local transit system sucks. A ratio of 1 is ideal; that's what you'd get if everyone took transit. Broadly speaking, it seems like there's an acceptable range from 0.698 (Multnomah County) to 1.25 (Bergen County), including those closest to 1, Norfolk County and Middlesex County, Massachusetts.
Posted by Cap'n Transit at 1:32 AM

Regarding Kitsap County, WA: It's located across the Puget Sound from Seattle, and access to Seattle either requires a long drive down to Tacoma to cross the Narrows Bridge and then back up I-5, or a ferry crossing. And if the ferry crossing counts as public transit (keeping in mind, that automobiles may cross on the ferries as well as bikes and pedestrians), that might explain why.

More to the point: Does it count as a "use of public transit" if a guy drives his car onto the boat in Bremerton, has a cup of coffee in the cabin while the ferry crosses the Sound, and then drives off the boat into downtown Seattle?