The Tappan Zee Bridge is not indispensable 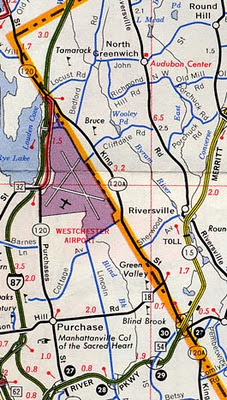 This Rand McNally "Mobil" Map from 1969 shows I-87 passing through Connecticut on its way to Port Chester. Scanned by kurumi.com.
A key component of the PR drumbeat in favor of replacing the Tappan Zee Bridge has been the myth that the bridge is indispensable. We are led to believe it is a cornerstone of our regional economy. After all, it's the centerpiece of the Thruway bringing cars and trucks from the City upstate, and of Interstate 287 connecting New Jersey with New England.

If anything happened to the bridge, the myth goes, freight traffic up and down the East Coast would be paralyzed, and the city would be cut off from Albany, Buffalo and Montreal.

If you stop and think for even a moment, you realize that this is a crock. There are four crossings south of the Tappan Zee, and six between it and Albany. When I go upstate, the buses take the Lincoln Tunnel; when I go to Connecticut they take the Tunnel and the George Washington Bridge.

I was intrigued to discover that the original route for Interstate 87 ran over the Newburgh-Beacon Bridge and the present route of I-684 through eastern Westchester, and was only later shifted to the Tappan Zee Bridge. Cars and trucks going between Upstate and the city could just take that route. Much of the traffic from New Jersey to New England winds up on I-84 anyway; it could just take the Thruway north to Newburgh instead of I-684.

But Cap'n, you say, wouldn't that put too much of a burden on these parallel roads? The Cross-Bronx and the BQE are saturated at peak hours as it is!

They are, but I was talking more about drivers using the Beacon-Newburgh Bridge and the I-90 bridge to the north. And if the crossings to the south are saturated, people will use these bridges. There is room.

If there is a concern about freight movement, we should come up with a sustainable freight movement plan. The arrangement promoted by the road-builders would only increase our dependence on trucks and continue to hold the economy hostage to the sprawl machine. If we want to improve freight movement across the Hudson, we should spend the billions on the Cross-Harbor rail tunnel, not on road lanes that are wide open to any solo driving commuters.

Well, the least they can do is make sure a rail line goes across the Hudson at that point. It could serve both freight traffic as well as passenger traffic.

George, building the line to freight specs would make it even more expensive than it already is. Freight trains like moderate grade and ample siding space. In contrast, EMUs with decent power-to-weight ratio and starting tractive effort and redundant traction systems, such as the M7s, can climb 4% grades without much trouble.