The habits of successful busways

In response to Stephen's question about why "bus rapid transit" across the Tappan Zee Bridge was projected to cost "as little as one billion," I described the Empty Lanes attack and how sometimes it may even be part of a more nefarious plot. Tonight I'll explain how this led to only full-corridor BRT proposals, even while the road widening had a proposal just for the bridge.

The successful busways of the world fall into two categories. There are thick market busways, built in areas where there already is a thriving bus market, following the Magic Formula for Transit Ridership, and often earning a profit for the operators. Examples of this include Bogotá's Transmilenio, Guangzhou's Zhongshan Avenue line, and our own Lincoln Tunnel Exclusive Bus Lane and Bx12 Select Bus. Then there are former rail lines that are too narrow to fit more than a couple lanes of road, such as Pittsburgh's East and West Busways and Los Angeles's Orange Line.

Busways connecting sprawl with sprawl, without established bus markets and with heavy competition from government-subsidized roads, tend to have a hard time attracting passengers and fostering transit-oriented development. This 2002 post from Light Rail Progress cites Virginia's Shirley Busway and LA's Harbor Transitway as having lost riders, as well as former train lines like the Pittsburgh South Busway. At the very least they take a long time to build ridership, and are thus vulnerable to the Empty Lanes attack.

That makes it all the more mystifying why the Tri-State Transportation Campaign would push so hard for BRT across the Tappan Zee Bridge, and why they would happily throw the "prohibitively expensive" commuter rail option under the bus, so to speak. But it does explain why Tri-State pushed so hard for "full-corridor" BRT, from Suffern to Port Chester. 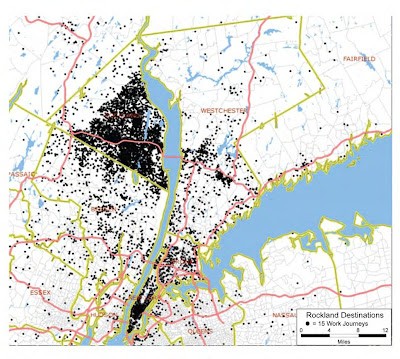 Work destinations of Rockland residents, according to the 2000 Census. From Tappan Zee Transit Mode Selection Report, Figure 1-4.
Nyack on the west shore of the Zee and Tarrytown on the east shore are both pretty small towns with high car ownership rates, and neither of them has enough residents or jobs to fill a busway between them when there are four parallel lanes of mixed traffic. Tarrytown has the Metro-North station where bus riders could transfer to Manhattan-bound trains, but even that isn't enough of an attractor. The buses could run in mixed traffic on both sides of the bridge, but that would limit their competitiveness with driving. Thus, transit advocates pushed for "full corridor BRT" to try to pick up as many Rockland residents and Westchester jobs as possible. And this, of course, added to the projected cost.

Given all this, the full corridor is pretty essential to the success of BRT. Without the full corridor you might as well not bother. In contrast, the highway widening plans put forth by the DOT were pretty clearly fantasy projects thrown in to make their bridge widening seem cheap by comparison. But because the bridge widening was only for the bridge, it also looked cheap by comparison to the BRT, and that's what allowed Commissioner MacDonald to reject BRT as not "financially feasible.”

Still, a billion dollars seems a lot for thirty miles of bus rapid transit, which we're constantly being told is "much cheaper than rail." So why aren't the proposals cheap?
Posted by Cap'n Transit at 2:48 AM

The cost of various transportation projects partly depends on how the accounting is done. Roads often look like they are cheaper than other modes because it is standard practice to either delay accounting for certain costs or to push those costs onto other ledgers.

In this case, rail is probably cheaper than a dedicated bus line because rail line lines take up less space than highway lanes. Bus there may be no way to tell for sure.

Tarrytown has the Metro-North station where bus riders could transfer to Manhattan-bound trains, but even that isn't enough of an attractor.

I suspect that's because they can hop on a bus and be in the Port Authority faster. Some of those buses filling the XBL orginate in Rockland. Or hop on a train on their side of the river. You want to get people from Rockland to Manhattan the way to do that is through New Jersey.