A bus bridge to the Rockaways

As I wrote before, the best thing for the Rockaways is not to rebuild so much infrastructure-intensive development there; that means no more dense housing projects, and no more car-oriented racist gated communities. If you're going to rebuild those, the next best thing is to rebuild the old rail connection between the Long Island Rail Road and the elevated tracks in Far Rockaway and run express service to Penn Station.

Since I wrote that last post, in fact, I found out that the shopping center that was built across the old right-of-way has been failing for twenty years. The supermarket has been renovated, but much of the other space is vacant, and most of the cars in the parking lot are owned by park-and-riders from Nassau County. So it would be relatively easy for the MTA to buy out the owner, move the supermarket and rebuild the tracks.

Even if we do that, it would take a while to rebuild. The MTA is apparently hard at work rebuilding the trestle across Jamaica Bay. It's not clear how long that will take, but in the meantime, the MTA should have done more with buses. In the few days after the hurricane, the MTA, the DOT and the NYPD worked together to build an impressive rapid bus corridor connecting downtown Brooklyn with Midtown Manhattan. Why can't they do that for the Rockaways?

In fact, it's much easier for the Rockaways, because we're not talking about taking lanes from a relatively narrow, heavily trafficked avenue like Lexington. Instead you've got Cross Bay Boulevard, which becomes Woodhaven Boulevard and connects directly to Queens Boulevard and the Long Island Expressway. Cross Bay Boulevard is 145 feet across, and Woodhaven is 195 feet. There's plenty of room to take two lanes for buses, like this. 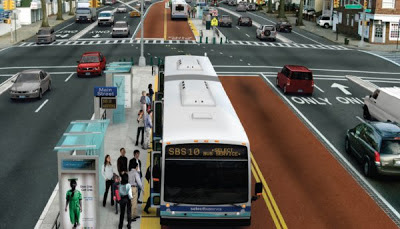 This is the rendering from page 41 of this PDF from the DOT illustrating possible layouts for "BRT Phase II." Looks awfully like Woodhaven Boulevard, doesn't it? In fact, here's Google Street View of Woodhaven at 101st Avenue, looking north: 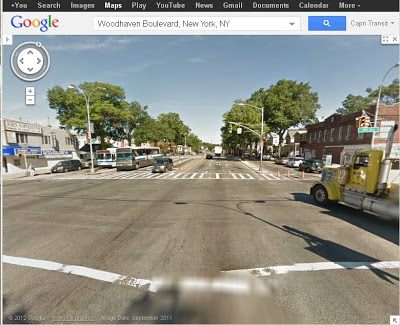 It's a slightly different angle, but the buildings are the same. That's right, four years ago, DOT bus planners were looking at Woodhaven Boulevard as a model for rapid bus service. Even before A train service was wiped out, the Q53 more than doubled its ridership, to 14,844 per weekday, in the four years after it was taken over by the MTA. Imagine how many more people would ride it if it had its own dedicated lanes.

As an idea, this is a no-brainer. With subway service to Manhattan cut, Rockaway residents deserve a rapid bus to Midtown, connecting to the A, J, Z, M and R trains. The only obstacle is political.
Posted by Cap'n Transit at 11:48 PM

Some of that gain in Q53 ridership was because some passengers shifted away from the Q11. Of course, passengers shifting because the service improved isn't a bad thing, but I just figured I'd throw that out there.