What you need for a good bus bridge

It's my hope that New Yorkers will remember three events from the recovery from Hurricane Sandy. The first is the gridlock and chaos that Manhattan, Brooklyn and Queens experienced on Wednesday, October 31, the day after the storm. The second is the difficult but functioning system in place on November 1 and 2. The third is the hours-long waits in commutes to and from New Jersey the following Monday and Tuesday, November 5 and 6.

The differences between the three events tell us the importance of three factors to good bus service: (1) having enough buses and drivers, (2) having enough street space and (3) managing how and where people will board the buses.

On Halloween in Manhattan, Brooklyn and Queens, the first two factors were absent. The MTA was running most of its regular bus routes, but did not add any buses to accommodate increased demand from people who couldn't use the subways. Lots of people drove.

On the next day, the City instituted the HOV-3 rule, which drastically cut the number of cars on the streets. The DOT and the MTA instituted the "bus bridge" from Brooklyn to Midtown, putting hundreds of additional buses to use. They planned to keep a lane on Third and Lexington Avenues clear for the buses, but it turns out that the HOV-3 restriction took care of that. They had factors 1 and 2, but not 3. There were gigantic mobs waiting for buses at Jay Street and Atlantic Terminal, but in general people were understanding. 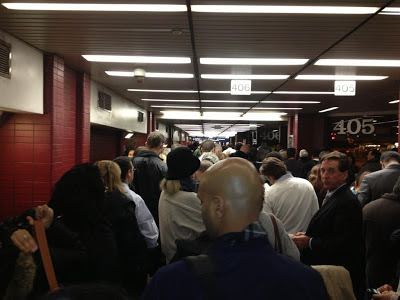 Photo: MartyJGardner / Twitter
On Monday, New Jersey Transit sent hundreds of buses to it eight park-and-rides to pick people up and bring them to the ferries. A lot of people couldn't or didn't want to drive to the park-and-rides, so they formed long lines at train stations and bus stops. The situation going home from the Port Authority Bus Terminal was worse: commuters tweeted picture after picture of Port Authority corridors filled with passengers waiting on line. A gasoline shortage kept some people off the road, and the Holland Tunnel was only open to buses, but there were no HOV restrictions on or near the Lincoln Tunnel, and the only dedicated street space is the morning rush XBL. That meant that NJ Transit didn't have factor 1 (buses) or 3 (terminal management), and very little of factor 2 (street space).

On Tuesday, NJ Transit shut down four of the eight park-and-rides and used the buses to supplement existing routes that were overloaded. Over the past few days, New Jersey has gotten loans of hundreds of buses, and deployed them on these routes. Tomorrow it will start additional service from train stations to the ferries. By using more ferries, it shifts passengers from the overloaded Port Authority terminal to the relatively uncrowded (I hope) ferry docks. So now it has factor 1 (buses) and 3 (terminal management) but not factor 2 (street space). Already people are tweeting that there's improvement; we'll see how it goes tomorrow.

There are a few lessons we can take away from these three incidents. First of all, private cars can't provide anything remotely approaching the capacity of a good subway or commuter rail system. I hope I don't hear the words "surface subway" out of anyone's mouth for a long time.

Second, at this point it seems clear that in order to run a bus system at anywhere near the capacity of a train, you need all three factors: (1) buses, (2) street space and (3) terminal management. You might be able to get away with two out of the three factors if passengers are patient, but not indefinitely.
Posted by Cap'n Transit at 12:11 AM

I was watching the news and thinking don't these poor souls have VPN? i worked all week from my dining room table. over the last few years i set up my part of the IT systems i help manage to the point where i can press the power button remotely over the internet.

lots of people in my company also worked over VPN that week along with my wife who's office was flooded and lost power.

i can understand that not everyone can do it, but the amount of people going into manhattan the first few days was staggering.

I'm not sure a VPN would help a restaurant employee, hotel worker, construction worker, grocery store clerk or any of the non-white collar jobs in the city. It's incredible the blinders we have these days to all the people around us who are working hard making the city function and don't do it from behind a desk. It's also frustrating to see people who it was imperative for them to make it to work even if the commute was 3 or more hours because if they didn't show up to work, they wouldn't be paid.

I'm glad you were able to telecommute. I was happy to be able to do the same. Seeing the crowds should be eye opening to the make up of our labor force though.

I wonder what it'd take for the city to contract with the private tourist bus lines to use their double-deckers in case of subway emergency.

I think you nailed it with this one. To their credit, MTA and NJT seemed to get better every day as they learned things on the fly. Let's hope they remember these lessons for next time (even as we hope there is no next time).

I'd like to think the surface subway/BRT zombie will die, but unfortunately, I think it's got too many backers who either don't know anything or have a vested interest. Pretty sure you'll be writing about it again...