Last week I wrote about two self-propelled travel memoirs, and how the travelers seem to have spent almost as much time being driven around as they did on the water or the trail. As I've written before, if I'm going for a walk I want to walk. I don't want to be driven to one trailhead and picked up at the other end. This is not some misplaced authenticity fetish: I know that even before cars, walkers got rides on horses and oxcarts and boats. It's just a matter of taste. I don't like being driven around. I find it infantilizing.

Here's the kind of "civilized walk" that these books make me long for: a long walk from one interesting place to another, taking several days. Ideally, it would run through a mixture of cities, suburbs, parks, countryside and small towns, with some long quiet stretches where I could walk for an hour or two without encountering too many people. It would have a comfortable indoor place to stay every night. Since I don't have the kind of connections that David Morine had, that means a room in a reasonably priced inn, hotel or bed and breakfast. 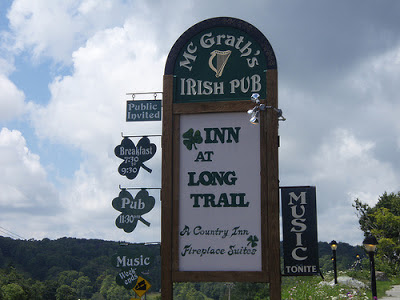 Photo: Rebecca Sudduth / Flickr.
A civilized walk would not require climbing mountains or crossing large wilderness areas, although it might be nice if there were optional side trails to do those things. It would not involve camping, lean-tos, youth hostels or couch surfing.

For me, a civilized walk would also not require being picked up or dropped off in anyone's car. It would not involve walking on the side of any busy roads or stroads. That means that the entire trip would be on car-free trails, sidepaths or sidewalks, with maybe a few short bits on small streets, country back roads and driveways. It also means that both ends of the walk would be accessible by transit.

You can also have civilized day walks that are transit-accessible at both ends, entirely on trails, sidepaths, sidewalks or pedestrian-priority streets. There are plenty of these in the greater New York area, but they've been covered, at least in part, so I won't focus on them.

I don't know how widely my preferences are shared. It's pretty clear that some people don't want to own cars, and just about everybody hates walking anywhere near a stroad. Beyond that, do other people feel as uncomfortable being driven around as I do? All those Appalachian Trail hikers don't seem to have a problem with it. Do other people mind walking down paved country roads where a drunken tourist might come around a corner at fifty miles an hour? It's not clear.

In future posts, I'm going to explore some of the possibilities for civilized walks like this. There are lots of incomplete options, and some promising leads, but I haven't found anything yet that really looks like it would work.
Posted by Cap'n Transit at 12:31 AM

I completely agree, and I've often thought about my longing for (and the near impossibility of) the same.

Do you know of Matt Green, author of the blog I'm Just Walkin'? A few years ago he walked from New York City to California. While much (most?) of the ground he covered wouldn't be considered "civilized" under your definition, he was frequently offered rides and always refused, unless it was a sidetrack that didn't have to do with his progress. Right now he's walking every street in New York City. I'd definitely check out the blog archive from his transcontinental walk; it's great.

I am a bit puzzled by your exclusion of hostels and other forms of budget accommodation. Reference to "reasonably-priced" hotels and bed-and-breakfasts seems like almost a contradiction in terms. (Do you know of an establishment you'd be willing to stay at anywhere in the world where the employees could afford to be guests with any regularity?)

When I am travelling I'm happy to sleep wherever I can find a clean bed most cheaply, and the vast majority of hotel amenities seem like pointless luxury or signalling. A major difficulty of car-free travelling (by foot or otherwise) in the US is the relative lack of hostels and other accommodation where I would not have to pay for such amenities, compared to the situation in most other developed countries. Sometimes the only remotely-affordable options are motels in the middle of nowhere (still more expensive than most hostels) or camping, both of which are difficult without private transportation.

Walking near a stroad isn't the end of the world. I rather enjoyed walking from Manhattan to the Connecticut line along US1, in spite of its problems. Certainly I'd prefer walking along a stroad to having to climb a mountain to get where I'm going.

Josh, I've heard about Green's project to walk the streets of Manhattan, but I didn't know about his cross-country trip. Thanks!

Three, I'm not a big fan of pointless signaling. After a sleepless night in a hostel outside of Lisbon when I was in college, I've soured on hostels. It's true that some hostels have single, quiet rooms and some hotels have a lot of noise. I didn't mean to exclude hostels completely.

You make a good point about affordability. There used to be lots of cheap, walkable hotels in cities and vacation areas. Many of them had the shower (and even the bathroom) down the hall. And yes, some of them had prostitution and drug dealing. But a lot of "urban advocates" threw the baby out with the bathwater, and pushed them out of the city.