Nathan H. was following my train of thought when I wondered whether a politician - specifically, Governor Andrew Cuomo - could be a "car guy" and still be an effective advocate for transit. That train of thought started with Cuomo's statements on climate change in the aftermath of Hurricane Sandy:


It's a longer conversation, but I think part of learning from this is the recognition that climate change is a reality, extreme weather is a reality, it is a reality that we are vulnerable. Climate change is a controversial subject, right? People will debate whether there is climate change … that's a whole political debate that I don't want to get into. I want to talk about the frequency of extreme weather situations, which is not political … There's only so long you can say, "this is once in a lifetime and it's not going to happen again."

The next stop on that train was the Governor's numerous statements announcing storm precautions and service restorations on the transit system, which Noah Budnick of Transportation Alternatives took as an admission that the Governor controls the Metropolitan Transportation Authority. It's obvious that the MTA is a state agency, but from the beginning governors have distanced themselves from it, in part to avoid responsibility for raising fares. Cuomo could not resist taking credit for the positive things the MTA has done in this storm, prompting speculation that he may continue to acknowledge ownership of it for the rest of his time in office. 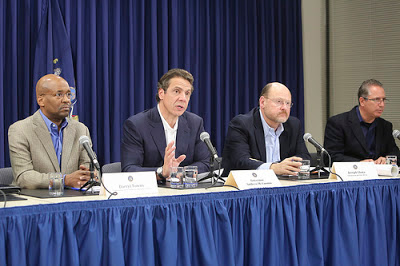 Governor Andrew Cuomo and MTA Chair Joe Lhota brief New York residents on transit service restorations after Hurricane Sandy. Photo: governorandrewcuomo / Flickr.
Let's connect the two. Despite the shell game played by Tom Rubin and perpetuated by his followers like Eric Morris, the more people we can get to shift from cars to transit, the slower our climate will change. The bigger the rail network we can leave for our children and grandchildren, the easier it will be for them to get around without putting more carbon dioxide into the air.

You may ask why we should bother curbing New York City's carbon emissions. Dense, transit-oriented cities already have low per capita pollution; New York's is half as much as Denver's. We emit a small portion of the country's total greenhouse gas emissions (less than one percent), and an even smaller portion of the world's. True, but Cuomo is the governor of the entire state, and a large percentage of the state's population lives and works in dense, older areas easily served by transit. A back-of-the-envelope calculation suggests that if the Governor could shift half the state's population from cars to transit, he could cut the state's greenhouse gas emissions in half.

Beyond that, New York City and New York State may have a reputation as weirdo outliers whose ideas won't fly in Peoria, but there are a lot of people around the country and around the world who are paying attention to us. If Cuomo leads on transit, many of those people will follow. If he ever succeeds in his goal of becoming President of the United States, getting the country to shift to transit would have a huge effect on the world's carbon dioxide emissions. New York State could provide a proof of concept for him.

Until last week, I was sure that Cuomo - who admitted to not having ridden the subway in years - was both clueless and uninterested on these issues. His raising of the climate change issue, awkward and fumbling as it was, changed that for me. It seems now that, like the President, the Governor had chosen to be silent on the issue, afraid that it would make him a magnet for reactionary mockery and ruin his carefully crafted reputation as a Democrat that Republicans could do business with. On October 30, it was clear that he had made up his mind that it was foolish to remain silent.

Similarly with transit, it is clear that Cuomo realizes that the city is dependent on its subways, buses and commuter trains to function properly. He knows what Joe Lhota repeated many times: that millions of people depend on the system every day. He knows that keeping it running smoothly means happy voters.

Has Cuomo gone beyond that and made the connection between a smooth, ubiquitous transit system and slowing the rise of the oceans? Unfortunately, that is not clear. Let's hope he has, and that his days of treating the subways as a trivial service are over.
Posted by Cap'n Transit at 11:20 PM

Regulations in a big state like NY can have serious effects elsewhere. Look at how the California car standards have affected the rest of the country.

As much as I want to be hopeful about Cuomo, I noticed in today's paper that all his comments have been about securing better access to gasoline. A NYS strategic oil reserve?!?

This guy is not serious about transit or smart growth.

Just nitpicking your point that " We emit a small portion of the country's total greenhouse gas emissions (less than one percent), and an even smaller portion of the world's": New York's per capita CO2 emissions are still about 50% more than world average, since its per capita income is on the order of 5 times the world average. And a decline in American living standards is the most likely way CO2 emissions will decrease, as has been the case in the last few years. In a country whose biggest export is pollution, it's hard to transition away while guaranteeing a soft landing, and nobody in US politics, least of all Cuomo, is even making that effort.

Unfortunately Alon is right about Cuomo. I think at this point there is basically no chance that he will do anything to lower CO2 emissions. http://www.nydailynews.com/opinion/lead-climate-change-article-1.1202221?localLinksEnabled=false