Earlier this month Pedro Madruga at Copenhagenize found a really bad zombie rule that continues to wreak havoc all over the world: the 85th Percentile Rule. This is the procedure used to set a speed limit:

1. Design the road to permit the highest speeds that the budget and the landowners will let you.

2. Measure the speed of drivers and find the 85th percentile - the speed where 85% of drivers are going at that speed or slower. Round to the nearest multiple of 5. That's the speed limit that you put on your signs. 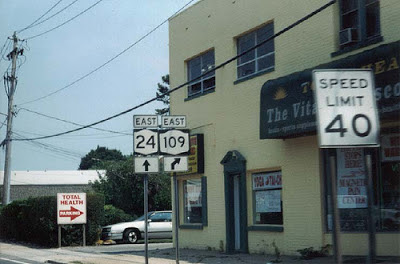 Farmingdale, NY. Photo: Dougtone / Flickr.
As Madruga points out, this is a shitty idea, because most pedestrians and cyclists aren't going to go more than ten miles per hour, never mind stopped cars and buildings. Animals too, of course. This leads you straight into Strong Towns' famous Conversation with an Engineer.

However, Madruga doesn't acknowledge that the 85th Percentile Rule does contain two valuable insights. The first is that large differences between the speeds of drivers on a road can be dangerous. If you've taken physics, you know that relative speed is what matters in a crash. With pedestrians and cyclists we're able to ignore that, because the difference between a pedestrian's speed and zero is so much smaller than that between a driver's speed and a pedestrian's. But for drivers and car passengers, it matters.

The other insight is that some drivers follow the speed limit, while others drive as fast as feels safe. The bigger the difference between those two groups, the more destructive it will be when a member of the feeling group hits a member of the limit group. By increasing the speed limit to the 85th percentile, they encourage the limit group to travel at the same speed as the feeling group, minimizing that difference.

We don't want to throw out that insight. But we do want to be less crazy about it. The key is to change the order of the steps:

1. Decide on a speed limit based on the pedestrian, cyclist and built environment you want to see along this road. That's what you put on your signs.

2. Design the road so that 85% of drivers will feel comfortable traveling under that speed.

By reversing those two steps, we make safety and comfort for all a priority over speed, and we acknowledge the value of a safe pedestrian environment in maintaining a livable city. That's the kind of thinking that goes into Twenty is Plenty and the New York City Slow Zones that it inspired. We can get finer-grained and more flexible than that, but it's the right direction.
Posted by Cap'n Transit at 12:38 AM

Did you read this discussion a while back?
http://la.streetsblog.org/2012/02/07/vroom-speed-limit-increases-head-back-to-city-council-but-do-they-have-to/

I heartily agree with your overall point about reversing the steps when designing a road and deciding the speed limit.

But the statement that "If you've taken physics, you know that relative speed is what matters in a crash" is a bit of an oversimplification. It is strictly true if the crash occurs "in a vacuum", but not in real life where even a tiny relative speed between crashing vehicles that are going at a high "absolute" speed can lead to secondary crashes.

I believe the main reason engineers want everyone to go at the same speed is not to reduce relative speeds in crashes, but to reduce the number of passing maneuvers which can lead to crashes.

I also agree with the design-to-the-desired-speed point. Another factor to consider: as a political reality, it doesn't make a lot of sense to make the commonplace a legal violation. Law enforcement is a lousy way to change widespread behaviors.

I have started a Campaign in Nova Scota, Canada "50kph is Too Fast" . I have come up against the 50yr old 85th percentile rational in every direction I have turned. I believe it is a given 1- that road design has the biggest impact on speed. 2 - road engineers build roads to safety handle speeds higher then posted. 3 - I think that we can agree that most areas are not going to rebuild their streets.
Has anyone asked if so much work goes into working out the proper speeds for our roads by our engineers then why are they all the SAME. A monkey can copy/paste 50km for residential streets.
Compare a car 50 yrs ago to now - drivers feel much safer driving faster in today's car with seat belts, air bags, air conditioning plush seats and a 1000 watt sterio. Oh and this safety cautious driver , you mean 1 of the 40% that text and talk.
And my last point- thousands of people's live and drive on our Military Bases and the speed limit is 30km. I believe it works because the mind set is similar to talking out loud in Church -- You Don't !