Being a car guy in the age of transit

It's well known that Governor Andrew Cuomo is a "car guy." In a 2010 Esquire profile, he and his brother Chris discussed their love of "seventies muscle cars" like Corvettes, Firebirds and El Caminos. He travels mostly by car, and otherwise he prefers helicopters and planes, occasionally riding a bike or paddling a canoe, but hardly ever setting foot on a subway or bus. Can he legitimately govern a state where over thirty percent of the population commutes by transit? 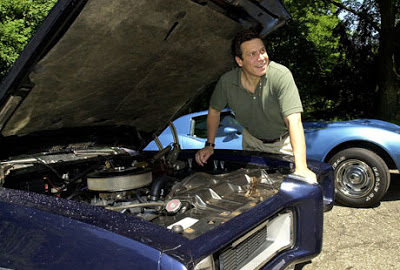 Photo supplied by Andrew Cuomo to Esquire magazine.
I have to admit at this point that when I was a teenager I was something of a "car guy." Or at least, I wanted to be. I could identify the make and model of most cars on sight. I had one of those seventies cars in my yard, and my mom's mechanic friend always promised he'd come by and help me get it running.

I like machines. I'd probably still be into cars if it wasn't so hard to operate them without killing people, and if they didn't destroy our environment so badly. Instead, I play with other kinds of technology. But as a mechanically inclined person I totally respect and endorse other people's mechanical hobbies. I know people who like other dangerous technologies as well, like explosives and blades, and I don't judge.

I also like recreational walking and bike riding, so I respect and endorse other people's hobbies that have to do with transportation. Governor Cuomo is certainly not the only governor to have such a hobby. Aside from Mark Sanford's well-known love of hiking, there is also former Nevada Governor Jim Gibbons, who likes horseback riding. Triathlete, Presidential candidate and former New Mexico governor Gary Johnson likes skiing in addition to his other hobbies.

The key is that I never saw Governor Sanford throwing billions of dollars into hiking trails, or Gibbons reestablishing a network of intercity horseback stages, or Johnson building massive bridges that can only be used by cross-country skiers. These governors may have been informed by their hobbies to some degree, but they did not make them the basis for policy. Instead, they built policy around what they believed was right for their states - or not, depending on their level of corruption.

Thus it should be for car guys like Cuomo. We still have horse guys and women even though no governor rides a horse to the capitol, and we will always have car guys, even if some day it will be unthinkable for a governor to get to Albany any way other than the train. Andrew Cuomo is a car guy, and at home he probably always will be. But when it comes to transportation policy, even Andrew Cuomo should not be a car guy. It's bad for our state, and bad for the world.
Posted by Cap'n Transit at 11:25 PM

The only MTA announcements Cuomo's twitter account should be making are the fare hikes coming next year. I can't believe anyone is even playing along with our "car guy" making himself as a transit news feed this week.

On the other hand, it does support your point that this is an age of transit when the most valuable news items are transit service announcements.

Meanwhile Bloomberg takes the wrath of all the non-government "car guys" for imposing limitations on cars driven into Manhattan. Pretty sweet deal for the governor, having not much to do with any of it but getting all the credit and none of the heat. Also, free subways! wooooooooo

The best thing is that I don't think our newly declared anti-global warming crusader governor will be able to cash in the NYS fracking check he was counting on. It's too openly hypocritical. Even the establishment fluffers at the Times won't stand for that. But he probably will get away with the tappan zee, because you have to have at least three brain cells to connect those dots.

you can't get to Albany by train these days.